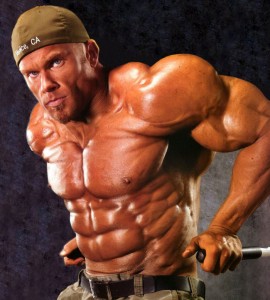 Lose fat by doing high-intensity resistance training. A new study from Italy shows that a metabolically intense weight training program performed to failure will help you lose fat because it burns much more energy than a traditional training program.

The term “intensity” in this case doesn’t refer to the intensity of the load, but to the workout protocol causing metabolic stress so that it favorably increases energy use in the 24 hours after the workout. Known as excess post-exercise oxygen consumption or EPOC, post-exercise calorie burn is often discounted by trainers and public health officials for fat loss because it requires you to work hard and push through some physical pain—it’s not easy to get that extra calorie burn, but when you do it will pay off. This tip will show you why the effort is worth it.

Researchers used weight-trained young men and had them perform one of two weight training programs: 1) a Traditional program of 4 sets to failure of 8 exercises with an intensity of 75 percent of the 1RM, or 2) a High-Intensity program of 3 sets per exercise of leg press, chest press, and pull-downs performed using an intensity of 85 percent of the 1RM lifted to failure with two subsequent 20-second rest-periods followed by additional lifts to failure.

Results showed that the following:

The Traditional program took 62 minutes, resulted in 7835 kg being lifted, and produced an elevation in blood lactate of 5.1 mmol/L post-workout. At 22 hours after exercise, this group experienced a 5 percent increase in calorie burn, increasing from an average 1901 to 1999 resting energy expenditure/day. An insignificant increase in the use of fat for fuel occurred as measured by the respiratory exchange ratio of 0.822.

The High-Intensity program took 32 minutes, resulted in 3872 kg being lifted, and produced an elevation in blood lactate of 10.5 mmol/L post-workout. At 22 hours after exercise, this group experienced a 24 percent increase in calorie burn, increasing from an average 1909 to 2362 resting energy expenditure/day. A shift to use fat for fuel occurred as measured by the respiratory exchange ratio of 0.798.

As you can see, in half the time and performing about half the volume, the participants burned significantly more calories. An increase of 452 calories in resting expenditure, which is what the High-Intensity group experienced, is not negligible and would be highly effective for producing rapid fat loss if the workout was performed 2 to 3 times a week. Take note that the 452 calories is resting expenditure and doesn’t account for any additional energy burned during the workout.

Researchers suggest the High-Intensity weight lifting protocol produces a similar “perturbation of energy homeostasis” as sprint intervals that have also been shown to significantly elevate EPOC and produce fat loss. Here’s why.

First, it appears beneficial to lift to failure and use very short rest to produce a major build up of lactate. The need to remove blood lactate—a waste product—will elevate energy expenditure.

Second, during high-intensity training, the body will shift to burn fatty acids to satisfy the high energy cost of exercise, leading to the use of fat stores for fuel. The High-Intensity protocol favorably shifted the body to use fat rather than stored glycogen for fuel, which occurs as the respiratory exchange ratio nears 0.7.

Third, though not measured in this study, it’s probable that the high metabolic stress of the workout and short rest periods elevated growth hormone, a hormone that mobilizes fat to be burned for energy.

Researchers note that an increase in EPOC is not guaranteed: Previous studies investigating EPOC show that it can be elevated by metabolically stressful training or by lifting a very high volume, neither of which are normally achieved by the average person throwing weights around in the gym. For example, scientists quantify volume by calculating the total weight lifted during a workout and have found that for trained athletes, volumes above 25,000 kg lifted in traditional workouts may be necessary to elevate EPOC.

Take away the following points:

If your goal is to strip body fat quickly, high-intensity training is ideal, but it must be programmed correctly. This method of short rest periods using moderately heavy loads lifted to failure with additional short sets to failure in a rest-pause manner is effective.

Be sure to sequence exercises so that as you become fatigued you don’t put yourself at risk of injury due to poor technique.

Sprint workouts are another effective fat loss method, especially if your weight training goal is diverse from fat loss, such as building strength or power.