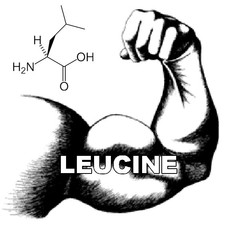 Over the last 20 years or so the supplement industry has released several times as many effective BB’ing supplements than it did in the previous 40 years. Back in the 1950’s, when the supplement industry was just starting in earnest, there wasn’t a single product that was worthy of ingestion, unless you considered poor quality soy powder, which was likely rancid (or would be very soon) worth ingesting. In those days nutrition knowledge was very limited compared to what it is today, so it was relatively easy to fool customers into thinking that these supplements were a virtual muscle building miracle. Of course, they were anything but, yet this did not stop fraudulent, money-hungry company owners from trying to get rich at other people’s expense.

The supplement industry did not turn the corner until the early 90’s, when we finally started seeing some decent protein powders hit the market. Prior to this time, all BB’rs were better off consuming whole food as their sole protein source, as the available technology had not yet advanced to the point where we could extract protein from food sources in a pure, undenatured form. The end result was a difficult to digest, inferior, absolutely horrid tasting product.
Everything changed when creatine hit the scene. With most users adding between 4-8 lbs in just 30 days, along with impressive increases in both maximal strength and muscular endurance, this was the first product that was truly capable of claiming “steroid-like” results. It was so effective that it single-handily revolutionized the supplement industry and proved to everyone that the industry was capable of producing products that really worked.

In just 10-12 more short years, the industry was selling legitimate oral steroids of extreme potency. While this sector of the supplement world is still alive and well, it should be differentiated from natural supplementation (creatine, protein powders, aminos, etc), as steroids are more accurately defined as drugs rather than food supplements. In order to avoid possible confusion, let me state that any references to the word “supplement” in this article will only apply to those products which are considered natural.

With so many supplements out there providing some type of recognizable benefit, how do we know which one is best? In reality, there is no single best supplement, as that which is best will be determined by someone’s goals and desires. Still, there are a handful of supplements available that have proven themselves as stand-outs in this over-crowded market. The one I want to talk to you about today hit store shelves in the 80’s as part of a combination product, but fell out of favor somewhat during the 90’s. Within the last decade it began to re-immerge as a standalone product and through continued research, was widely recognized as one of the muscle-building super-stars of the supplement world. I am referring to leucine, one of the three BCAA’s and by far the most important amino acid for BB’rs. Leucine differentiates itself from the rest of the pack by being the primary amino acid responsible for stimulating protein synthesis. As a BB’r, this is of paramount importance, as increased protein synthesis is the process by which muscle growth occurs.

In the absence of leucine, muscle growth cannot occur. One could make the claim that this is true when referring to any of the essential amino acids, as they are all required in order for protein synthesis to take place. If this is the case, then what makes leucine so special? Well, in addition to being one of the essential amino acids, leucine also functions as the primary regulator of protein synthesis via the mTOR pathway. mTOR (short for “mammalian target of rapamycin”) is one of the chief anabolic pathways in the body and a mandatory step in the muscle growth process. Depending on the quantity of leucine consumed, mTOR can be stimulated to a greater or lesser degree. The more strongly it is stimulated, the more rapidly we grow.

With a direct link having been established between muscle growth rate and leucine intake, the next logical question to be asked is “How much leucine do I need to take in order to generate a maximal response?” Fortunately, science has shown us that it takes about 4.5 grams of leucine in order to achieve this effect. However, the type of protein source consumed will play a role in determining whether or not protein synthesis is maximized at this dose. This is due to the varying digestion rates of different protein sources. Very slow digesting protein foods, such as red meat, will take many hours to fully liberate the leucine within it, resulting in a diminished response. In order to maximize this effect, this dose of leucine needs to be dumped into the system all at once, not slowly delivered over many hours.

This problem can be alleviated by either using whey protein, as its quick digestion rate allows for a maximal increase in leucine generated protein synthesis without needing to consume massive doses of protein (40-45 grams is sufficient). While whey is certainly a great protein with several noteworthy benefits, consuming such a dose numerous times daily is not only unrealistic for most, but it isn’t ideal either. The alternative is simply to use straight leucine. A single 4.5 gram serving contains almost no calories, can be quickly consumed, takes up very little room in the stomach, and can easily be added to just about anything with very little effort.

By utilizing leucine in supplement form, we are effectively able to turn any protein food into a muscle building powerhouse. For years we have been taught that if we want to get the best results from our BB’ing efforts, we need to consume the best proteins, such as whey, casein, meat, and egg protein. These have been considered prime sources of amino acids for generations. Other protein sources, such as wheat and rice protein were looked at as being vastly inferior and for good reason…because they are not capable of increasing protein synthesis to an equivalent degree.

In order to demonstrate the power of leucine, a study was conducted in which various protein sources were compared for anabolic effect by assessing their ability to increase both protein synthesis and insulin levels. See below: 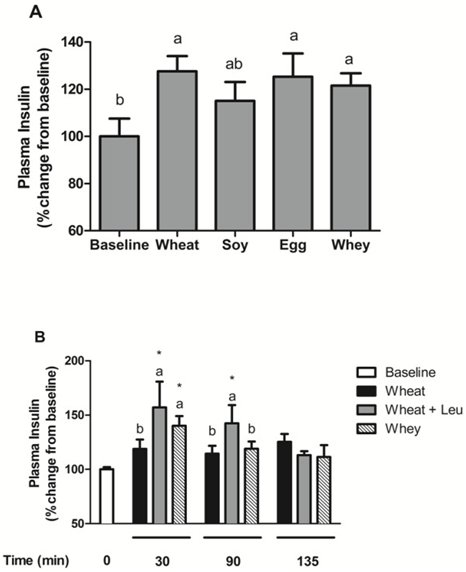 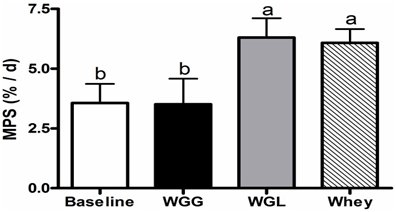 As you can see in the charts above, when leucine was added to wheat protein, the combination increased protein synthesis to a greater degree than the previous gold-standard, whey protein. As if this weren’t impressive enough, the wheat + leucine group also led to greater insulin concentrations.

It is clinically validated test results like these and many others which have earned leucine its current reputation as one of the top BB’ing supplements in the world. Leucine can be taken either with or in-between meals, as it will stimulate protein synthesis regardless…and don’t think that you must use 4-5 grams of this stuff in order to receive benefit. Even 2 grams, especially when added to slow digesting proteins, can significantly increase a meal’s muscle building potency.
Leucine is also fairly inexpensive to use, with some internet distributers selling 1,000 grams for as little as $35-40. When using 10-20 grams daily over several equally divided doses, it is an extremely cost-effective product. I consider leucine to be basic stock for any serious BB’r and in my opinion it ranks right up there with creatine as the #1 sport-supplement.