Is the Clock Ticking on Kai Greene? 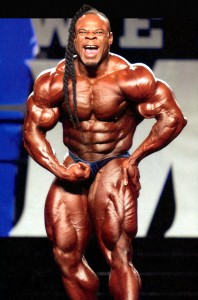 He couldn’t do it in 2012 sliced and diced. When he tried to out mass in 2013 it wasn’t enough to dominate. What has become perfectly clear to bodybuilding fans worldwide is that Kai L. Greene will have to be the world’s most complete bodybuilder of all-time if he is going to ever reach his goal of becoming the world’s #1 bodybuilder and new IFBB Mr. Olympia “Grand” Champion. But I ask, is the clock ticking on Kai’s lifelong goal?

Usually by mid-Summer the buzz begins to get louder. Will Kai Greene dethrone Phil Heath? He’s tried the smaller and harder formula – that didn’t work. He’s tried the bigger, rounder, and fuller formula – that didn’t work. It’s become very clear that in order to knock off Heath and take down the champ, we will need to see a mixture of the two. Big flaring delts and lats, full upper pecs, a wasp-like waistline, flaring and feathered quads. And for my personal taste, a shaved head and corrected posing techniques just to add the last bit of polish needed to take out gifted one.

And, what if he doesn’t figure out this elusive formula? Kai has time on his side; he’s just 38 years old, and in today’s bodybuilding game that puts him in the prime of his career. Ah, but Heath is only 33, and he too is in the prime of his career with a five year head start. If Kai doesn’t figure this balance between sleek lines, hardness, and size will he really be satisfied with second place after second place? Not that Heath is in the same class as Ronnie Coleman, but after about the 3rd Sandow, we all asked, “Well, who’s going to come in second this year?”

The way I see it, Phil Heath winning #3 really put Kai behind the 8-ball. The more wins he accumulates, the more the snowball effect will take place, and the more momentum he will build. The “Ambassador of Bodybuilding” mantra has a real effect as the face and brand of bodybuilding will be cultivated more and more as the years go by. These peripheral and auxiliary side-factors make it that much harder for a champion to be defeated in a sport judged by people. It’s not like there’s a bench press for reps competition at the end of the judging to determine the victor.

Three Sandows will turn into five before we know it. At that point it’ll take retirement, muscle tears, or a freak like Jay Cutler in 2006 to defeat a then aging Coleman. But unlike Jay and Ronnie, Heath is the champion, and as mentioned before, 5 years the junior of Kai – completely different circumstance. If anything, we’re more likely to see Kai retire first, Kai have muscle tears earlier, or Kai begin to atrophy and be passed up by new freaks like Rhoden or Ramy.

In light of Kai’s pursuit of Phil, he should also look in his rearview mirror and see what’s coming up from behind him. Although Kai hasn’t gone backwards in the past few years, what if he were to slip to 3rd or 4th place in 2014, as we see a surging Shawn Rhoden, Roelly Winklaar, or Dennis Wolfe? What if a mishap in conditioning or unforeseen atrophy were to occur? It could be a very real possibility; and, then what? The clock is ticking.

How will Kai get the job done in 2014? If I had all the answers I probably would have already tried to contact him. By all accounts he needs to grow into a show. This past year he was still very large just a few weeks out, and although he managed to come in bigger, he still didn’t have enough of a size to separation to fullness ratio. Many would argue he beat Phil Heath this past year, but as we all know, he didn’t knock him out.

One thing I know to be certain: Phil Heath is beatable. The only question is: Will it be Kai Greene who is the one that will eventually put him to sleep?