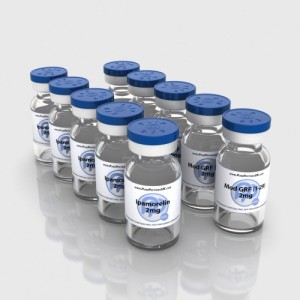 Belonging to the category of drugs known as GH secretagogues, Ipamorelin’s primary function is to stimulate the release growth hormone from the pituitary gland. Its fairly recent entrance into the marketplace has earned it the distinction of being a 3rd generation GHRP, noted for exhibiting several unique characteristics which differentiate it from the other drugs in its class. Its exclusive ability to maintain a high level of selectivity is its most promising attribute, as it is the only GHRP capable of achieving substantial elevations in growth hormone without a concomitant rise in prolactin or cortisol. This unique feature has caught the eye of pharmaceutical companies, making it a more likely contender for human clinical trials in the future. The high degree of selectivity demonstrated by Ipamorelin is in stark contrast to similar compounds, such as Hexarelin, GHRP-2, and GHRP-6, for example.

Like all GHRP’s, Ipamorelin increases GH levels through the inhibition of somatostatin and while the benefits of increased GH levels are obvious, many are not aware of the benefits associated with this particular peptide. One common side effect of most GHRP’s is their ability to increase the hunger response. Although some may find this to be a desirable trait under certain circumstances, there are many who would prefer that it remain absent. In the case of the latter, Ipamorelin may be the ideal candidate for inclusion into one’s GH peptide program, as this side effect is non-existent. Further defining Ipamorelin within the GHRP landscape is its relatively long active life, enabling it to maintain elevated GH levels for an extended period of time and in turn, prolong lipolysis. In this respect, Ipamorelin is more similar to exogenous GH than the other GHRP’s.

On a mg to mg basis, Ipamorelin is not quite as potent in terms of GH release as the commonly researched GHRP-2, necessitating higher dosages. However, its complete lack of side effects combined with an increased active life is a trade off many are willing to accept. When it comes to dosing, recent research suggests that an effective middle ground appears to fall somewhere between 300-500 mg per inject, with a ideal dosing frequency of 1-3X per day, depending on the researcher’s goals and needs. As with all GHRP’s, administering Ipamorelin in concert with a GHRH, such as ModGRF1-29, will further amplify GH output. However, until additional research is conducted, some debate will remain as to whether it is more cost-effective to simply administer larger dosages of Ipamorelin alone, or utilize lower dosages of Ipamorelin in conjunction with a GHRH.

Another ongoing debate, which in my opinion originates from an inability to view the situation in its totality, is the GH peptide vs. exogenous GH superiority argument. Since the arrival of GH peptides several years ago, we have heard strong arguments coming from both sides of the fence, regarding which is best. As our knowledge has increased, many previous questions have been answered, leaving us with a more complete understanding of how well this class of drugs compares to exogenous GH. However, in this comparison I believe many have lost sight of the fact that the ultimate goal is not to declare an overall winner, but to determine which drug (or combination of drugs) best meets the needs of the individual, while simultaneously maximizing results and minimizing side effects. When evaluated from this perspective, the either/or argument begins to take a back seat, as it quickly becomes apparent that neither exogenous GH nor GH peptides are ideal for every situation and often, a combination of the two is the preferred approach.

There are multiple reasons for why this is so. When assessing areas such as cost-effectiveness, total cost, the delayed formation of antibodies, prevention of pituitary suppression, and the ability to maintain elevated GH as anti-bodies return to normal levels, we are given 5 reasons why incorporating GH peptides into most GH user’s programs is a good idea, allowing the individual to maximize results while simultaneously minimizing side effects. For example, when evaluating the situation from a cost-effectiveness standpoint, we know that it is possible to use a reduced dose of exogenous GH in combination with GH peptides, while spending less money and experiencing the same total increase in GH & IGF-1 levels. Likewise, by implementing a combination of GH & GH peptides, the pituitary suppression which typically accompanies exogenous GH use will be eliminated, as GH peptides will stimulate the pituitary to produce endogenous growth hormone even in the presence of exogenous GH. I can’t think of anyone who views pituitary suppression as a positive side effect, making this a beneficial application for pretty much everyone.

In addition, the chronic use of exogenous GH is well known to lead to anti-body formation, which prevents the individual from extracting maximum benefit from the GH they’re administering. When the problem gets severe enough, if the user ignores this fact and continues to administer GH, he will essentially be throwing his GH in the garbage can. At this point, if the individual wishes to resume effective GH use, he must take enough time off to allow anti-body levels to return to normal. By implementing GH peptides in a specific fashion, one can overcome this problem while maintaining elevated GH & IGF-1 levels. This is accomplished by continuing to use GH peptides during GH off-time. Since GH peptides cause the body to produce GH naturally, they do not result in anti-body formation. Needless to say, this is a big plus for those individuals who wish to maintain levels of these hormones consistently.

Additionally, GH peptides can potentially assist in delaying anti-body formation, depending on program set-up. For example, it is very common these days for GH users to administer their entire weekly dose of GH over 3 individual injects, such as Monday, Wednesday, and Friday. This type of program is perfect for delaying the build-up of anti-bodies, as frequency of use is one of the primary variables responsible for accelerating anti-body formation. With only 3 injections being administered per week, the individual will be able to use GH for a much longer period of time before succumbing to excessive anti-body levels. The only down-side to this program is the lack of GH-induced lipolysis experienced on off days. However, by using GH peptides on off days, not only are IGF-1 levels elevated even further, but lipolysis will now take place 7 days per week, greatly enhancing the fat loss process.

Ipamorelin can be used to good effect for any and/or all of these purposes, catering to issues never addressed by the use of traditional GH alone. From a cosmetic standpoint, Ipamorelin is less prone to causing water retention than the other GHRP’s, making it an ideal choice for those who would like to minimize this potential side effect. Coupled with its inability to stimulate the appetite, this GHRP tends to be particularly appealing to women, dieters, and anyone else who struggles with caloric intake, although its use is certainly not limited to these areas. Over the last couple of years, Ipamorelin has steadily grown in popularity…and with good reason. For those of you who have previously employed the more commonly used GHRP-2, but would like to try something different, Ipamorelin is a sound alternative supported not only by heaps of anecdotal evidence, but by a variety of published university research.