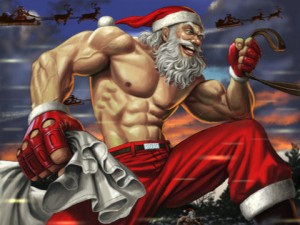 It’s Christmas time at the Meinrod house and what better time of the year to dive into IIFYM then right now! I made a recent post on Facebook saying that from now until New Year’s I’m only going to be drinking whey isolate shakes and eating chocolate chip cookies, along with a funny jab to my co-host on The First Callout, Dave Pulcinella “#2foodsthatwork”. Since I’m not neurotic enough about my diet to keep it clean this time of year I’m also attacking my annual cookie binge eating with a different outlook then in other years. If it works over the next week, who knows, I may start buying into this IIFYM cult.

The first thing I’m going to be doing this holiday season is dropping all chicken, beef, and fish from my diet. If my goal is to get the minimum grams of protein to stave off atrophy then I’m not wasting calories on anything baked or grilled. In reality, my whey shakes will be a blend of whey isolate, egg white, and micellar casein to help optimize a sustained IV drip of fast and slow release amino’s into my blood. Plus, I need to make sure my jaw muscles aren’t tired out on meat when there’s good junk food to stuff down my throat.

This strategy is a big change from years past. Before, I had always said I wasn’t going to stay on my diet, but what would happen is I would continue to eat my grass-fed beef, natural peanut butter, sweet potatoes, and veggies; along with a dozen cookies per day and drinks all night. And the result was always a guaranteed 15lb weight gain every single holiday season. Something had to give and thus, here we are with this new highly scientific IIFYM strategy.

Alcohol is the tricky part. I’m already going to be drinking a lot of liquids with all these shakes, but at our house, it’s not Christmas without at least polishing off a small Russian army’s stash of vodka. Now, without substantial food in my belly besides cookies and junk, that much booze is usually a recipe for a bitchin’ hangover. But have no fear, I have found the recipe. Remember, IIFYM requires a fair amount of fiber in your diet. My trick is for every new drink I pour, I have to swallow 3 or 4 psyllium husk fiber capsules. If I’m feeling really daring there’s always a serving of Metamucil that will do the trick as well. The added fiber has always been a secret weapon of mine when I’m going to be drinking alcohol.

Like most of you, I fully intend on working out this Christmas. Why would anyone want to drink waxy maize or Karbolyn post workout when you could grab a few brownies instead? Who needs caffeine, a preworkout, or any ephedra tablet before training, when cinnamon rolls will pack all the energy anyone could ever need? If this holiday IIFYM experiment works I should send a personal thank you email to Ian McCarthy for making this acronym and lifestyle a savior.

When I first listened to the now classic, Pulcinella vs. McCarthy debate on IIFYM and the infamous Poptart, the two talked strictly about the efficacy as it pertains to attaining the leanest possibly bodybuilding physique imaginable. Dave looked at Ian’s views as incredibly rudimentary and his demeanor was nothing short of draconian. Conversely, Ian saw Dave as this dinosaur stuck in his misguided ways of yesteryear. Had the two switched the debate and discussed was IIFYM a reasonable and manageable way to stay in the 10-12% body fat range while still living a normal lifestyle then it would have taken on a whole new meaning, instead of two buzzards pecking away at the carcass of a lifeless topic with neither side stopping to breathe for the other to properly counter.

Will this “2 Foods That Work” approach actually be successful for me? I’m really hoping it works and I don’t end up a starving miserable scrooge over the holidays. If I make a late night run to the grocery store somewhere between Christmas and New Years for a few pounds of bison or salmon then suffice to say that while in principle IIFYM should have worked, but it was clearly a piss poor attempt at outthinking my body. On the other hand, if this works, I could write a new book, be on a daytime talk show, and be the spokesperson for Chips Ahoy. Ok, that might be wishful thinking, but at least I won’t be gaining weight over the holidays like the millions of other fatties out there eating cookies this year.