How to make your ABS POP – More Dieting or More Training? 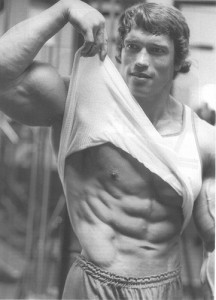 EXPOSING YOUR ABS is a matter of getting very low body fat levels. The lower your body fat, the “thinner” your skin will appear (actually the “skin-fold” which contains skin plus subcutaneous fat), and the more your abdominals will show through.

DEVELOPING YOUR ABS is a matter of training, and in that respect, the popular maxim “abs are made in the kitchen, not in the gym” is not entirely true. It’s only true that without the proper diet (doing it right in the kitchen), the ab exercises by themselves are useless. Well-developed abs can remain covered up with a layer of fat and it’s possible to out-eat any amount of exercise.

Personality A is the person who thinks, “as long as I get super lean, my abs will show,” so they blow off ab workouts or train them very little, thinking they’ll have ab EXPOSURE and ab DEVELOPMENT just by being lean (diet alone).

Personality B (which includes a lot of women) is the type of person who cranks out a 30 minute or even a one HOUR ab class every day, but they’re not aware of the importance of low body fat – or they simply don’t put the effort into fat-burning nutrition, so they never get their body fat low enough.

Both of these people are making a mistake.

Here’s the true secret of exposing your abs and getting them to “pop out” more:

It’s absolutely a combination of both – low body fat to EXPOSE the ab muscles (reveal/uncover the muscle that’s already underneath), and training to DEVELOP the ab muscles (build what’s not there yet). If your ab muscles aren’t well developed, they’re still not going to pop much even if you reach ultra-low body fat levels. You have to train them as diligently as any other muscle.

Some people find abdominal development difficult. I’ve always found building abs easy – the removal of the fat was the harder part for me. It took me years before I figured that out. The good news is, after I learned how to get ripped just once, I owned it for life. It’s like riding a bicycle – you can always get back on and ride even if you haven’t ridden for years, once you know how.

So which personality type are you? A or B?

Ultimately what you really want is become personality C. These are the “abdominally enlightened ones” – the people who take nutrition (revealing the abs) and training (developing the abs) as equally important and can recognize which area needs the work. Personality C always gets the best results.

The Value of Body Fat Percentage Vs. Skinfold Measurements

Some people are tracking overall body fat percentage, but not paying much attention to the individual skinfolds. It’s very possible for skinfolds on the extremities and even in the hip bone area (illiac crest skinfold site) to be quite low and to have body fat more concentrated in the abdominal area near the umbilicus.

It’s very enlightening to know the skinfold thickness measurement in your abdominal area. That helps you when you’re trying to figure out if you need to get lower body fat and get “thinner skin” to reveal your abs more. Most people track the iliac crest skinfold but not the abdominal skinfold. The abdominal skinfold is usually at least a few millimeters higher than the iliac fat fold.

If you have veins running across your belly button area and / or your abdominal skinfold is in the range of 3.0 mm, you are bloody ripped. With low single-number skinfolds, your abs are showing as much as they’re going to show. If you want them to look better, it’s all about ab training at that point.

If you want to be brutally honest with yourself on your level of leanness, find the largest skinfold and use that as your benchmark, not your smallest skinfold.Visualize an imaginary circle right around your belly button – there is almost always a pocket of fat there even when the illiac crest fat has “run dry” and even when the very lower lower ab region is starting to show veins.

By the way, this all means that skinfold testing is more useful in the quest for six pack abs than bodyfat testing methods like bioelectric impedance analysis (BIA) because you literally know the skinfold thickness covering the abs. Measure skinfolds as well as body fat percentage and you have more feedback to judge progress. What gets measured gets improved.

Chapter 3 in Burn the Fat, Feed the Muscle is totally dedicated to how to measure your own body fat percentage. If you’re not measuring it yet, you need to start and you need to learn how to do it right.

Abdominal Shape and Genetics: What Training Can and Cannot Change 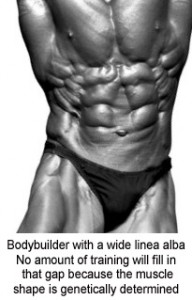 But one thing you have to realize, is that whether you have the best or the worst genetic potential for muscle size, the structure of your abdominal musculature is entirely genetic. NOT EVERYONE HAS A PERFECT 6-PACK. The six pack is three rows of rectus abdominus separated by tendinous horizontal bands and one large tendinous band down the middle called the linea alba.

Some guys have a wide and deep lina alba, to the point it looks like a gap. That’s not necessarily a bad thing, it’s just an individual’s genetically given muscle shape.

Some people have only 2 visible rows of abs and below that where the 3rd row is usually located is only a flat sheet of tendinous tissue – no 3rd row. Others have 4 visible rows if you count the lowermost portion of the abs – an 8 pack. Some people consider having the 8-pack being the ultimate in “genetic freakiness.”

Ladies and gentlemen – YOU CANNOT CHANGE ANY OF THIS!

If you have a 4 pack, all you can do is develop the 4 pack you have. You can make that 4-pack “pop out” more, but you can’t build a 3rd row to give you a 6 pack where there is no muscle fiber to begin with. If you have a 6 pack with even rows, you are considered genetically gifted, at least in a muscle aesthetics sense. If you have an 8 pack with nice, even rows, we’re going to call you a “genetic freak!” 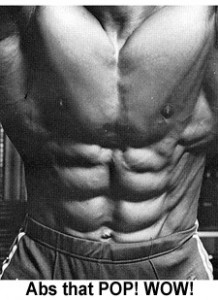 Inside the limitations of your genetics, the abdominal muscle fibers that you DO have can be developed like any other muscles – they can hypertrophy with direct training.
abs that pop

Although abs don’t grow outward as much as other muscles, they do POP OUT and take on a slightly rounded appearance. How shall I describe it… kind of like giant chicklets or raviolis!

What about lower abs? Most people seem to have trouble there. Can you target lower abs and make them pop more? This is controversial. Some experts say no you can’t train your upper and lower abs separately. When highly regarded authorities like spinal biomechanics expert Stuart McGill say you can’t isolate your lower abs, a lot of trainers consider it “case closed.”

Naturally, you cannot completely isolate your lower abs, but many trainers and bodybuilders do believe that different exercises can place a little more stress on the lower ab sections than the upper ab sections. Some argue that there are different innervation points for different segments of the adbominals. Others point to EMG studies which show greater activation of the lower abdominals during certain exercises.

Usually these are the exercises that bring the legs toward the upper body and or tilt the pelvis back. These include hanging knee ups, hanging leg raises, lying hip thrusts (“toes to sky” exercise) and reverse crunches. (Hanging leg raises are very difficult, but if you can master them, they will bring out your abdominals at an alarmingly fast rate).

The abs are a muscle that can often be trained very effectively just with body weight. The problem is, most people stick with bodyweight exercises exclusively, even when they can do more than 25 reps per set, sometimes even 50 or 100 reps. At that point, you’re training pure endurance and not hypertrophy.

It’s absolutely a myth that endless high reps gives you better abs. If your goal is endurance or personal satisfaction about your conditioning abilities, that’s one thing. But doing hundreds of reps on abs with bodyweight is the wrong approach.

I know some girls who can do abs for an hour, it seems (I’ll never figure that one out. Guys, unless youre related to Jack LaLanne, don’t try to keep up with those girls who teach ab classes, they will embarrass you, LOL! I bow to women’s ab endurance). But anyway, remember that muscle hypertrophy is achieved in the 8-12 rep range and even if abs are a more high-rep responsive muscle, 15-20 reps with some weight ought to do it.

Add some weight, drop the reps, go for a nice squeeze and contraction instead of those sloppy “speed reps” and see for yourself how much more it makes your abs pop.

I do have one final warning about weighted exercises: don’t train your obliques with heavy weight if you’re prone to easy muscle growth there. Exercises like weighted side bends can make your waist wider and throw off your symmetry.

Pro bodybuilders who are naturally blocky and NOT born with the “Frank Zane tiny waist” and “classical symmetry” are not doomed – just look at Jay Cutler, Mr Olympia. However, guys with the propensity for large obliques have to blow up their deltoids to almost ridiculous size to compensate visually for the naturally wider waist.

They also have to be utterly paranoid about doing anything that will make the waist wider. Yet wherever I go, I always see people doing heavy weighted side bends (with a dumbbell), thinking that will shrink the waist. Wrong. It will do the opposite.

So, I think I’ve made the case pretty clear that abs are made in the kitchen AND in the gym, not one or the other.

If you’re a genetic freak mesomorph, you might diet down and find that your abs are already there. I know people who never train their abs (directly) and they have amazing six packs. On that note, I know people who have freaky calves who never work them either. Chalk up both of those scenarios to genetics.

For most of us in the normal range of the genetic bell curve however, it’s going to take strict diet AND hard training to get ultimate abs develoment and see that washboard pop!

If you need help with the “Abs are made in the kitchen” side of the six pack equation (fat burning nutrition), there is no better resource than Burn the Fat, Feed the Muscle. It’s literally like the bible of fat burning nutrition and body fat-reducing strategies. GET MORE INFO HERE or ORDER HERE.