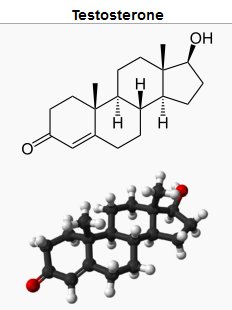 Testosterone is a steroid hormone from the androgen group and is found in mammals, reptiles,[1] birds,[2] and other vertebrates. In mammals, testosterone is primarily secreted in the testicles of males and the ovaries of females, although small amounts are also secreted by the adrenal glands. It is the principal male sex hormone and an anabolic steroid.

In men, testosterone plays a key role in the development of male reproductive tissues such as the testis and prostate as well as promoting secondary sexual characteristics such as increased muscle, bone mass, and the growth of body hair.[3] In addition, testosterone is essential for health and well-being[4] as well as the prevention of osteoporosis.[5]

On average, in adult human males, the plasma concentration of testosterone is about 7–8 times as great as the concentration in adult human females’ plasma,[6] but as the metabolic consumption of testosterone in males is greater, the daily production is about 20 times greater in men.[7][8] Females also are more sensitive to the hormone.[9] Testosterone is observed in most vertebrates. Fish make a slightly different form called 11-ketotestosterone.[10] Its counterpart in insects is ecdysone.[11] These ubiquitous steroids suggest that sex hormones have an ancient evolutionary history.[12] [http://en.wikipedia.org/wiki/Testosterone]

Chrysin – If you’re not afraid of hefty doses, you might be able to up your testosterone level by taking the flavonoid chrysin [structural formula shown here]. An animal study published by researchers at the University of Inonu, Turkey in Andrologia suggests this may be the case. Chrysin was a ‘hip’ supplement in the nineties, after test-tube studies had shown that it sabotages the enzyme aromatase. Supplements manufacturers seeking to boost testosterone concentration in the body added chrysin to their combinations – until it became clear that enzymes remove chyrsin so quickly from the body that supplements containing a few score milligrams hardly have any effect on testosterone levels.

Meanwhile chrysin and its analogues have started to attract attention again. Studies have now shown that substances resembling chrysin boost testosterone synthesis. Apigenin in parsley is one of these. Isorhamnetin in onions is another.

These recent studies were also done in test tubes, which is why the Turkish study is so interesting. The researchers tested the testosterone-boosting properties of chrysin on rats.

They used 50 mg chrysin per kg bodyweight per day, and gave it orally. The human equivalent of this dose would be about 500-800 mg per day. That’s high, more than you could get from food, but not stupidly high. It should be possible to consume this dose by taking a supplement. The figure below shows that 60 days of supplementation boosted the testosterone level by over 30 percent and improved the rats’ sperm quality. 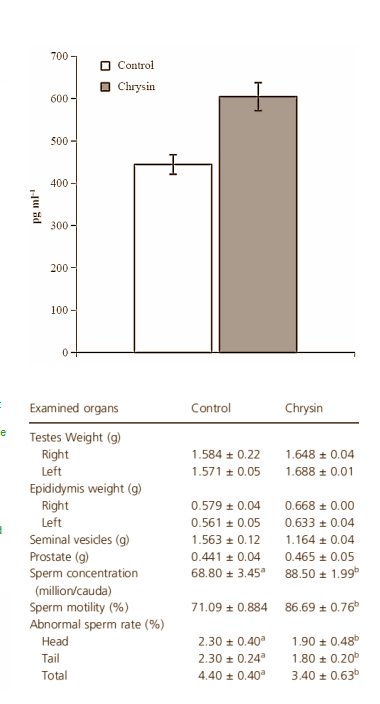 The Turkish researchers discuss the theory that chrysin inhibits the activity of the StAR protein, but report that they did not measure this. What they did measure was the activity of endogenous antioxidants such as superoxide dismutase and catalase in the testes, and the concentration of the detoxifier glutathione.

“Overall results indicate that chrysin positively affected sperm quality including sperm motility, concentration and abnormal sperm rate and increased testosterone levels”, the researchers write. “Based on our results, chrysin might be used as an alternative drug for the treatment of male infertility problems. The mechanism of action and dose analysis need to be further investigated.”

By the way, there are also synthetic chrysin analogues with enhanced bioavailability. We’ve been wondering for ages what the effect of these is on testosterone levels.

Beneficial effects of chrysin on the reproductive system of adult male rats.

In this study, the beneficial effect of chrysin, a natural flavonoid currently under investigation due to its important biological activities, on reproductive system of rats was investigated. Rats (n = 16) were divided randomly into two equal groups. Rats in control group were given corn oil as carrier. Chrysin was orally administered at the dose of 50 mg kg(-1) per day by gavages, and it was dissolved in corn oil for 60 days. Tissue thiobarbituric acid reactive substances (TBARS) and glutathione (GSH) levels, antioxidant enzyme activity (CAT, SOD and GSH-Px), sperm parameters (motility, concentration and abnormal sperm rate), reproductive organ weight (testes, epididymis, vesicula seminalis, prostate) and serum testosterone levels were determined in the rats. Our results indicated that chrysin significantly increased GSH, CAT, GSH-Px and CuZn-SOD levels, but did not change the formation of TBARS significantly. In addition, sperm motility, sperm concentration and serum testosterone levels significantly increased, whereas abnormal sperm rate significantly decreased with chrysin treatment. In conclusion, it is suggested that treatment with chrysin can positively affect the reproductive system in rats, and it can be used for the treatment of male infertility.

Newer Post
Green Tea has a Slightly Anabolic Effect on Strength Athletes
Older Post
Metabolic Damage – Why It Happens, How to Avoid It and How to Fix It