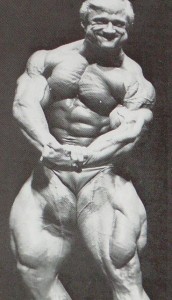 In addition to growth hormone, the abuse of exogenous insulin is also a significant risk factor in the development of insulin resistance. Those who use the drug chronically and in high doses are at greatest risk for developing this condition, while even moderate use frequently leads to a measurable decrease in insulin sensitivity. In an effort to minimize the potential for harm, the drug is typically run in cycles or at a reduced frequency. Unlike growth hormone-induced insulin resistance, which is difficult to diagnose without the aid of a physician or glucometer, insulin resistance brought on by exogenous insulin administration provides tell-tale signs of its presence. Chief among them is a diminished response to exogenous insulin administration.

In the beginning stages of insulin resistance, one of the first things most BB’rs notice is a reduced need for food post-injection; it becomes easier to maintain stable levels of blood glucose at an equal dosage. Along with this reduced need for food comes a perceived decrease in effectiveness. It becomes readily apparent that the dose one started with is no longer sufficient for eliciting the massive pumps and extreme increases in muscle fullness initially witnessed. This usually prompts the BB’r to further raise his dose in an effort to compensate for the diminished positive effects.

If this pattern continues to repeat itself, the BB’r will eventually reach a point where a dose previously capable of inducing a dangerous hypoglycemic response will no longer be able to cause a significant alteration in blood glucose levels. Just like with GH, it is impossible to pinpoint a direct correlation between a specific dosing range/ frequency of use and the various degrees of insulin resistance. In fact, this becomes even more difficult with exogenous insulin administration, due to the greater number of variables involved.

With an undeniable connection having been established higher dose growth hormone, insulin use and insulin resistance, the logical solution is to keep our doses below the threshold at which this condition manifests, right? Well, not exactly. This approach might be ideal for those who are primarily interested in preserving their health, but it is far from optimal for those who seek the maximum in muscle mass gains. While insulin resistance is a very real side effect which has the potential to disrupt muscle growth through multiple pathways, the fact remains that the more you use, the better these drugs work…to a point. As the article title suggests, GH and insulin are a true double-edged sword, as they leave the serious, health conscious BB’r in a catch-22 situation, being forced to choose between two extremes. However, it doesn’t have to be this way. As a BB’r in the modern world, you have at your disposal a number of advanced pharmaceutical preparations capable of counteracting many of the negative effects associated with GH & insulin use.

Through a combination of drug use and supplementation, as well as the manipulation of insulin type, injection timing, and injection frequency, we are able maintain an acceptable level of insulin sensitivity despite using what most would consider large amounts of these drugs. This enables us to reap maximum benefit from the insulin we put in our body, permitting a reduction in overall dosage without compromising results and sparing our health in the process. In addition, long-term muscle gains are often enhanced, as the BB’r is able to spend more time “on”, due to the body’s improved insulin response.
When it comes to improving insulin sensitivity, no drug has received more attention or acclaim than Glucophage and rightfully so, as it is one of the most effective (and safe) insulin sensitizers on the market. Its relatively inexpensive cost is an additional perk, adding to its overall allure. In my opinion, aside from those using GH and insulin purely for replacement purposes, Glucophage should be a mainstay in the programs of all who use these drugs. For those who seek assurance of its efficacy, they do not have to look any farther than the vast amount of clinical research supporting this drug. Its 1st clinical trial was conducted in 1957, which was subsequently followed by dozens of additional clinical trials spanning the last 5 decades. In the study below, Metformin was compared against a control group and evaluated for its ability to positively affect insulin resistance independent of anthropometric changes.

Metformin and improvement of the hepatic insulin resistance index independent of anthropometric changes.

To determine the change in the hepatic insulin resistance index (HIRI) after metformin treatment.

In this retrospective cohort study, Mexican mestizo patients with a body mass index (BMI) of 25 kg/m (2) or greater were evaluated. Participants were classified into 2 groups: patients who received metformin and patients who did not. Both groups were followed up for a median of 6 months (range, 4-10 months). The HIRI was calculated at baseline and at follow-up in both groups. We evaluated the independent effect of metformin on HIRI after adjustment for the difference in basal and final values (DELTA) of BMI, waist circumference, glucose, and insulin.

Metformin: the hidden chronicles of a magic drug.

Metformin, a biguanide is well known treatment for type 2 diabetes mellitus that has diverse mechanism of actions. Various studies have elucidated the role of this drug in different pathologies. The well-known United Kingdom Prospective Diabetic Study (UKPDS) has observed its survival benefits in a large cohort of individuals. Data has been conclusive that metformin also has beneficial role in lipid disorders as it improves the markers of metabolic syndrome. Studies have also shown the beneficial roles in antipsychotic induced weight gain as well as HIV lipodystrophy syndrome. Evidence is accumulating that metformin also improves the fertility in females with Polycystic Ovarian Syndrome (PCOS). It also delays aging and is effective in aging related disorders and is equally effective in inflammation related disorders at least in different rodent studies. Metformin’s major effect has been shown in various cancers ranging from solid to hematological malignancies. Researchers are working to reveal more benefits of this magic drug but it remains an unexplored territory for the medical community.
Copyright © 2012 European Federation of Internal Medicine. Published by Elsevier B.V. All rights reserved.

While Metformin is recommended as the first-line of defense for those with insulin resistance, there are many other over-the-counter supplements which have been demonstrated to have a significant impact of insulin sensitivity. Here are a few of them: Cinnamon (3-6 grams/day), Banaba leaf (3 grams), Acetic acid (2-4 TB/day), D-Chiro Inositol (1,200 mg/day), and Alpha lipoic acid (600 mcg/day).

Chromium picolinate and fish oil also play a role in the maintenance of healthy blood sugar levels by acting as supporting agents rather than direct insulin sensitizers. Chromium is an essential trace mineral and co-factor in various enzymatic reactions in the body, with one of its tasks being the regulation of blood sugar. However, chromium supplementation will only result in improvement in blood sugar management when trace levels of this trace element are deficient. One should not expect to see any improvement in this area when levels are already satisfactory. In the event that supplementation is desired, a dosage of around 100 mcg per day is sufficient. Fish oil has a similar, indirect impact on blood sugar regulation, but with most Americans lacking in this nutrient, daily supplementation should be considered mandatory. 3-6 grams per day is the generally recommended dosage.

Now that we have addressed the primary problem and explored various avenues of treatment, the question most people want to have answered is…”How do we put this all together into a single, effective program?” In reality, there is no one way to accomplish this, as program set-up should be tailored to the unique circumstances and goals of each individual. This makes crafting a one size fits all master plan impossible. However, I will provide some general guidelines, which can be adjusted from there as needed. Let’s begin by taking a look at prescription supplementation; namely, Glucophage.
According to the drug manufacturer, when used for the treatment of type II diabetes, the daily maximum dose is 2,500 mg. The total daily dose should be split up into 3 equally divided doses, taken with meals. Dosage should be gradually titrated upward in order to avoid potential gastrointestinal upset. The effects of Glucophage are acute, providing a near-maximal effect after the first dose. It can be used temporarily in order to combat the negative effects of insulin resistance causing drugs…or it can be used long-term for the same purpose. In terms of side effects, in very rare cases it can cause a condition known as lactic acidosis, which must be treated immediately (please research this side effect and its related symptoms before use). It can also modestly suppress endogenous testosterone production, which is not a concern of AAS using BB’rs, but would be for those who rely on their natural production to power the muscle growth process.

In addition to the above OTC and prescription supplementation, the BB’r should be mindful to take some time off from his GH and insulin use. Some BB’rs might shun the idea of time off, especially when talking about GH, but this is a mistake, as chronic, long-term GH use results in the build-up of GH anti-bodies, which will greatly decrease the effectiveness of the drug. In essence, it is like you are throwing a portion of your GH in the garbage can and the longer you remain on exogenous GH, the worse the problem will become. By taking a short 4 week break every few months, GH anti-bodies will have time to return to more normal levels; once again enabling the individual to use his GH would good affect.

By taking the time to ensure you maintain an acceptable level of insulin sensitivity, you will enjoy a multitude of benefits. You will look better, feel better, function better, and be healthier. You will get more out of less and save money in the process. You will accelerate fat-loss while significantly reducing your chances of experiencing “GH-insulin gut”. Muscle growth and recovery will be enhanced and your muscles will be tighter & fuller through enhanced glucose transport. The investment is minimal and the application simple. That’s got to be worth looking into, right?