Green Tea has a Slightly Anabolic Effect on Strength Athletes 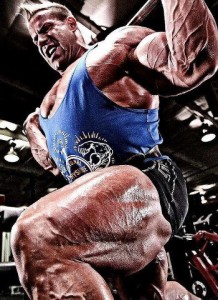 Strength training stimulates the build up of muscle tissue and the burning of body fat. Both effects are boosted if you combine your strength training with a couple of cups of green tea every day. Nutritionists at the Universidade de Sao Paulo in Brazil draw this remarkable conclusion in a study that will soon appear in the Journal of Medicinal Food.

This web magazine has written before on the pseudo anabolic effect of green tea. Bodybuilders who drink three cups of green tea a day lose less muscle fibre than bodybuilders who don’t do this. [Nutrition. 2008 May;24(5):433-42.] In 2009 we wrote about a sponsored study carried out at the University of Oklahoma, in which a training schedule resulted in more muscle mass and less fat mass as a result of a sports drink that contained green tea. And a couple of weeks ago we described a Japanese study in which elderly people built up more muscle power through strength training when they drank green tea.

Part of the anabolic effect of green tea may be because of a temporary rise in the testosterone level, which happens because the phenols in green tea inhibit the enzymes that remove testosterone from the bloodstream, but other mechanisms probably play a role too. The Brazilians suggest in their article that green tea may possibly boost the concentration of adrenalin, and thus improve the quality of training.

The Brazilian researchers did an experiment with 36 women aged between 20 and 40. The women were overweight and had BMIs ranging from 25 to 35. First the researchers got all subjects to lose weight by going on a diet consisting of 1200 kcal per day for four weeks. After that the real experiment started, and lasted for 8 weeks.

The researchers divided the women into four groups. Group 1 drank powdered green tea made by the Brazilian Sanavita, every day at 10:00 and 16:00. [sanavita.com.br] The subjects took 10 g powder from a container like the one below and mixed this with water. Each cup of tea contained 2.1 mg zinc, 13.5 mg vitamin C, 20 mg caffeine and 160 mg phenols.

The phenol quantity is on the low side: if you make green tea yourself it’ll contain more phenols.

The subjects in group 2 were given a placebo, which was identical to the powder described above, except that it contained no polyphenols.

Group 4 also did weight training, but drank a placebo instead of green tea.

The Brazilians looked for effects on the cholesterol level in the women’s blood, but found nothing. What they did discover was that the concentration of triglycerides in the blood of group 3 had declined significantly by 37.6 mg per decilitre.

Supplementation with green tea caused a considerable reduction in the fat mass of the green tea + strength training group. This interaction has been demonstrated previously. [Am J Clin Nutr. 2008 Mar;87(3):778-84.]

The Effects of Green Tea Consumption and Resistance Training on Body Composition and Resting Metabolic Rate in Overweight or Obese Women.

Abstract Green tea has been shown to have thermogenic and antiobesity properties. Therefore, it is important to investigate its effect on weight loss in humans, especially in women. We investigated the effects of green tea consumption combined with resistance training on the body composition and the resting metabolic rate (RMR) in women who were overweight or obese (grade I). After 4 weeks on an adaptive diet, 36 women were divided into four groups (group 1-green tea; group 2-placebo; group 3-green tea plus resistance training; group 4-placebo plus resistance training). The study was double-blinded and placebo-controlled. The RMR and body composition were ascertained for each volunteer, blood tests were performed, and subjects in groups 3 and 4 were tested for their one repetition maximum. Each subject followed the protocol and continued the diet for eight additional weeks, and periodic evaluations were administered. The mean RMR of group 1 decreased significantly and was accompanied by weight loss, maintenance of lean body mass, and decreases in both waist circumference and body mass index. Group 2 showed no variations in anthropometric or blood variables and significantly decreased their mean RMR. Group 3 showed significant increases in RMR, lean body mass, and muscle strength, and significant decreases in body fat, triglycerides, and waist circumference as compared to group 4. Green tea combined with resistance training its potential is increased with decreasing body fat, waist circumference, and triacylglyceride levels and by increasing lean body mass and muscle strength.