Ghrelin Mimetics and the Growing Bodybuilder 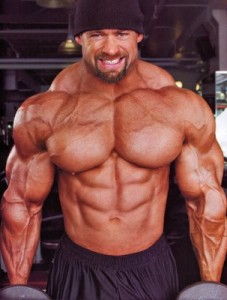 The 3 pillars of Bodybuilding Success

When we first began bodybuilding, the majority of us were completely lost when it came to knowing how properly integrate the essential elements of an effective weight training program. We may have read a few things in some magazines, watched some late night infomercials, or overheard some people talking about their own pursuit of physical improvement, but who are we kidding, we didn’t know shit…and our lack of progress was proof of that. Even for those of us who had a decent grasp on the principles of BB’ing, we later came to admit that we were hardly adept at this physical culture turned sport. It wasn’t until we admitted our shortcomings and began to pursue knowledge from trusted sources that we could confidently design our own programs, knowing that if we properly applied what we had learned, that we would be able to enjoy the fruits of our labor in the form of an improved physique.

Early on in our education we were taught that training, nutrition, and sleep were the foundation of any successful BB’ing program. Some of us took this to heart and through continued education, made exceptional progress, while others, either through stubbornness or ignorance, leaned on only 1-2 pegs of this 3-legged stool and were not so fortunate. More often than not, the average BB’r would fall into this later group and only after years of meagerly rewarded effort would the decision be made to alter course. Training, nutrition, and sleep have long been recognized as the three basic tenets of BB’ing success, as their presence is absolutely essential for the muscle growth process to take place. While performance enhancing drugs have also viewed as a vital component for those pursuing a career in professional BB’ing (a statement I would agree with), drugs themselves are not necessary for the building of muscle tissue. While there is no doubt that drugs can greatly accelerate the hypertrophy process, the absence of even one of these pillars will lead to the complete cessation of progress, regardless of drug intake. For this reason, these 3 elements of muscle growth are considered paramount.

The #1 Stumbling Block to Continued Progress

There are many BB’rs who, despite their mistakes, make pretty decent progress in their BB’ing journey, but as our musculature becomes more developed, the more costly these mistakes become in terms of progress. Nowhere is this more apparent than in the area of BB’ing nutrition. As we reach ever greater levels of muscle size, food intake must continue to rise in order to sustain this growth. This increasingly greater dietary demand poses a unique challenge not encountered in the training or sleep arenas. For example, we can’t deny that training effort has a potentially significant influence on growth rate, yet many BB’rs have grown quite massive while maintaining a level of training intensity consistent with their formative years. In the same way, our need for sleep does not normally increase beyond the generally recommended 8-10 hours per night.

Diet is quite different; the body’s needs are constantly evolving as we grow larger. A diet that was sufficient at 180 lbs will not be sufficient at 200 lbs, etc. For every additional pound of lean mass gained, our dietary needs increase. In short, the bigger we get the more calories we need to consume on a daily basis. If you ask any pro BB’r what the hardest part of BB’ing is, he will most likely tell you it is the diet. A successful BB’r eats for function, not for fun. This means eating enough of the right foods at the right times, day in and day out. As the BBr’s caloric requirements continue to grow, total food consumption will eventually end up exceeding what would be needed under normal circumstances by a significant margin. This often results in chronic appetite suppression. What used to be a pleasurable activity is now a chore. The BB’r loses the joy of eating. It is at this point that many individuals cease to make meaningful progress. This is not surprising, as force-feeding is not fun and takes an emotional, as well as a physical toll over time.

I have heard it said as of late that the idea of force-feeding is nonsense…and that anyone who recommends such a practice is giving poor advice. These individuals say we should base our food intake on our appetite, claiming that the body will tell us how much food we need to eat to grow. Well, this may hold true for those of us who either have monstrous appetites or relatively slow metabolisms, but for many, this would be BB’ing suicide, as most BB’rs will never have any desire to eat 4-6 thousand calories per day, regardless of their size.

The reality is that a large percentage of us need to eat beyond our comfort zone or at the minimum, more than we would like to. Now, if this were just an occasional issue, popping up sporadically, it would not be such a big deal, but this is not the way it is. BB’rs need to eat this way consistently and even slight deviations, such as eating ‘normally’ for a few days, will result in a loss of muscle tissue. Because this problem does not let up and requires incessant attention, many BB’rs will increase their food intake up to a certain point, but beyond that, they either consciously or unconsciously object to further increases. Instead, they choose to explore other avenues for continued growth. Some will increase their drug intake, while others will explore different options, but ultimately, only additional food will bring the desired results. If the BB’r wants to get to the next level(s), he must find a way to overcome this. If he cannot do it by sheer force of will alone, he will need to find something to assist him. It is here that we will introduce the category of supplementation known as Ghrelin Mimetics.

Modern Science and a New Hope

Ghrelin is a hormone produced primarily in the PD/1 cells of the stomach and the epsilon cells of the pancreas. While Ghrelin plays a role in multiple bodily processes, it is most widely recognized as the “hunger hormone”, responsible for controlling the body’s perceived need for food. It has the opposite function of the hormone, leptin, which is produced in fat cells and induces satiation at higher levels. Needless to say, manipulation of this hormone would have obvious positive implications for those BB’rs who suffer from appetite suppression. Fortunately for us, modern science has gone a step further in creating a class of drugs known as ghrelin mimetics, which not only offer the appetite stimulation of ghrelin, but have other beneficial effects, as well.

With potent growth hormone increasing effects, this class of drugs is most commonly known under another name, while their appetite stimulating properties are often viewed more as a side effect than a main function. These are the GHRP’s (ex. GHRP-6 and GHRP-2). Having been marketed much more heavily as an alternative to traditional growth hormone therapy, the ghrelin mimetic aspect of these compounds has often been ignored. With so many BB’rs struggling to consume enough food to facilitate growth, this is a mistake, as the associated benefits are undeniable. In general, the ghrelin mimetics have a profound effect on appetite, enabling some BB’rs to go from choking down their food to enjoying their meals. The positive impact this can have on diet adherence cannot be understated.

Many of the Ghrelin mimetics are still in their research phase, being unavailable for purchase from pharmacies. Even so, for nearly a decade, this has no stopped countless BB’rs from employing these drugs as part of their PED regimen. In addition, this is one of the few categories of PED’s which can currently lay claim to a perfect safety record, as they have not yet demonstrated any serious negative side effects in users. Furth enhancing their attractiveness is their ready availability, legal status, and low cost. They are sold by numerous research/peptide companies all over the Net. The chances of purchasing a quality product, regardless of where you purchase from, is high, as the GHRP’s are easy and cheap to manufacturer. With these products being so inexpensive to produce (costing literally only a couple dollars or less per vial), manufacturers have little incentive to sell bunk material, as the potential negative consequences of doing so far outweigh the benefit of saving at couple extra bucks per vial.

On a side note, as was previously cited, the ghrelin mimetics have proven GH releasing effects. In one recent non-clinical study, a reputable doctor in the BB’ing community set out to personally test the effects of a typical lower-dosed GH peptide program on IGF-1 elevation. It was found that IGF-1 levels were elevated the equivalent of administering 2-3 IU of GH daily. In another clinical study, these same doses were shown to induce spikes in GH over twice as high as 7 IU of GH, although it should be noted these spikes were short-lived, lasting only about 90 minutes in duration. Regardless, these results are impressive, with higher doses leading to even greater elevations in both GH and IGF-1. With GH being such a popular compound among BB’rs, it is little wonder why the ghrelin mimetics were initially marketed as GH releasers.

The application of these products is relatively simple, with all being administered in the same fashion and with similar doses. When used for appetite stimulation, GHRP-6 & GHRP-2 are administered on an as needed basis at least 15 minutes before effects are desired, although it may take roughly 30-60 minutes after administration to notice peak effects. The usual dosing range is between 100-300 mcg per inject and while higher doses can be utilized, they generally aren’t needed. Most companies sell GHRP-6 & GHRP-2 in 2 to 5 mg vials, which provides twenty to fifty 100 mcg doses. Pricing can fall anywhere between $9-$15 per 5 mg vial, although some companies charge more than this (they shouldn’t be).

These products are sold in tiny glass vials, which are frequently identical to the type of vial GH is sold in. Also like GH, the active ingredient resembles white powder in appearance, which is often packed tightly at the very bottom of the vial. This packed material can easily become dislodged during transport, allowing it to move freely throughout the vial, so do not fear if your vial looks like this when you receive it. All of the GHRP’s must be reconstituted prior to use and subsequently stored in the refrigerator, after which point they will maintain full activity for a few months. Prior to reconstitution they are not required to be refrigerated, but doing will extend their active life, as well as ensure they’re not exposed to sunlight or heat, which can degrade the products. Ghrelin mimetics can be used independently from other PED’s, as they do not require the concomitant use of any other drug in order to exhibit optimal effectiveness or to mitigate side effects.

For all of you BB’rs out there who desire to build the raw size of a pro/national level BB’r or who simply want to take things to the next level, you do not have to continue to fall prey to the common pitfall of appetite suppression and its subsequent deleterious effects on your progress. Through the proper implementation of ghrelin mimetics into your program, you may have found just the solution you are looking for. In my opinion, there is no other remedy which has proven itself more effective for the alleviation of appetite loss in today’s BB’rs, allowing them to not only move one step closer to their ultimate goal, but to re-experience the joy of eating for the first time in a long time.