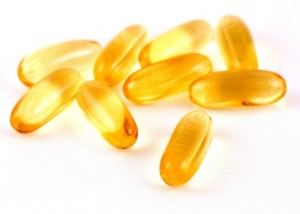 Intensive training reduces the activity of immune cells that destroy pathogens and cancer cells. That’s why athletes are more likely to fall prey to nasty viruses after a heavy workout or training session. Fish oil supplements probably offer protection, researchers at the University of Aberdeen discovered.

You’ll find regular postings on this website about substances that are supposed to give the immune system a boost. Potential candidates include oatmeal fibre, Chlorella, Echinacea, garlic, and – believe it or not – near beer.

The Brits decided to go in a different direction and examined the effect of fish-oil capsules. They were inspired by a study done in 2007 at the Universidade Federal do Rio de Janeiro, which showed that post-training fish-oil supplementation improved the functioning the immune system of swimmers. [Prostaglandins Leukot Essent Fatty Acids. 2007 Oct-Nov; 77(3-4): 139-45.]

The Brits did an experiment with 17 male subjects, all of whom were in their mid-twenties. The researchers got their subjects to cycle for an hour at 70 percent of their VO2max.

Half of the men had taken 3 g olive oil in capsule form [Control] for a period of six weeks up to the cycling session; the other half took 3 g fish oil [Fish Oil] daily. The 3 g fish oil contained 1.3 g EPA and 0.3 g DHA.

After the session the researchers analysed the men’s blood. They discovered that the immune cells of the men who had been given fish oil three hours after the workout produced more interleukin-2. Interleukin-2 inhibits the immune system’s activities against healthy cells, as happens in people suffering from arthritis and diabetes. Interleukin-2 also activates Natural Killer cells, the immune system’s primitive but effective storm troopers, which spring to action immediately a pathogen enters the body and decimate cells that develop abnormally.

“The findings in the current study demonstrate that supplementation with fish oil rich in omega-3 polyunsaturated fatty acids can enhance aspects of the innate and acquired immune system after exercise and it would be of clear interest, therefore, to determine whether over the longer term fish oil could decrease the incidence of upper respiratory tract infections associated with intense exercise training”, the researchers write.

The British study was not financed by a supplements manufacturer.

Fish oils and related fatty acid components have anti-inflammatory properties, with beneficial effects against various disorders such as cardiovascular disease. A single bout of exercise can alter immune function. However, the effects of fish oil on immune function after a single bout of exercise are currently unknown. This study investigated the effect of supplementation with fish oil on the immune response to an acute bout of endurance exercise.

Post-supplementation EPA concentration was increased (P=0.0127) in the fish oil group. At 3h post-exercise PBMC IL-2 (P=0.0067) and NK cell activity (P=0.0163) was greater in the fish oil compared with the control group. However, PBMC IL-4 and IFN-γ productions, plasma IL-6 and cortisol concentrations, as well as neutrophil activity were unaffected by fish oil supplementation.

Effects of the fish-oil supplementation on the immune and inflammatory responses in elite swimmers.

The effect of fish-oil supplementation (FO-S) on the immune responses of elite swimmers was investigated. In a randomized placebo-controlled trial, swimmers received either fish-oil capsules (n=10) containing long chain polyunsaturated fatty acids (FA) of n-3 (LCPUFA n-3) or placebo capsules (n=10), both for 6 weeks. Plasma FA, immunological markers, insulin and cortisol were evaluated. The FO-S resulted in an increase in LCPUFA n-3 and a decrease in arachidonic n-6 FA in plasma and a reduction in the production of interferon-gamma by cultured cells. A reduction in the production of tumor necrosis factor-alpha was observed in both groups. An increase in interleukin-2 production and no significant difference in interleukin-4 were also observed. FO-S was able to attenuate the exercise-induced increases in prostaglandin E2. Circulating concentrations of insulin did not change, while cortisol and glucose showed increase after the study period. These results suggest that FO-S influence exercise-associated immune responses in competitive swimmers.