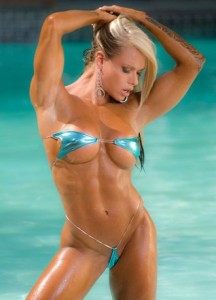 Triiodothyronine, also known as T3, is most frequently used in the BB’ing community as a fat loss agent; a job it accomplishes quite effectively. In fact, no other compound used today, aside from perhaps DNP, has the potential to burn body fat more quickly. However, T3 is non-discriminatory when it comes to calorie burning and will pull calories from wherever necessary in order to meet the body’s increased energy demands, including muscle tissue. At appropriate dosages and under the correct conditions, this is not a concern, but at higher dosages its non-discriminatory nature places obvious restrictions on the drug’s ultimate fat burning potential, as most BB’rs are not willing to sacrifice their hard-earned muscle tissue in order to enhance the fat loss process. This is understandable, yet limitations notwithstanding, T3 remains one of the most versatile fat loss drugs on the market, finding a home in the programs of both pre-contest and off-season BB’rs alike.

Before moving on, let’s take a brief look at what T3 is and how it is made within the human body. As you’ve probably guessed, T3 (as well as T4) is a thyroid hormone produced by the thyroid gland. This small organ is located in the front of the neck and is regulated by the all-important hypothalamus, which is the primary control center for many of the autonomic functions of the peripheral system, including regulation of thyroid hormones. When levels of these hormones become low, the hypothalamus sends a signal to the pituitary gland, telling it to produce a hormone called TSH (thyroid stimulating hormone). This hormone then travels to the thyroid gland, communicating the message to produce T3 & T4. The thyroid’s sole job is the production of these hormones, which it accomplishes by combining iodine with the amino acid tyrosine (Fun fact: thyroid cells are the only cells in the human body capable of absorbing iodine).

Post-formation, the active hormones are then released into the bloodstream, where they serve as regulators of whole-body metabolism. Every cell in the body is dependent on these hormones for proper metabolic functioning, with even a slight deviation in levels resulting in potentially disastrous consequences, including death. Being vital for normal human functioning, it is critical that we maintain normal levels of these hormones. This occurs naturally in most individuals. However, some are not so fortunate and must administer synthetic replicas of these hormones in drug form, in order to normalize metabolism and maintain systematic homeostasis. Although most BB’rs possess normal levels of T3, many will supplement their natural production with exogenous versions of the drug, in order to capitalize on the enhanced fat burning effects which result from an increased metabolism.

In addition to fat loss, T3 also has other benefits which might interest a BB’r. Chief among them is its ability to increase protein synthesis. However, this effect is mild and is most cases will only manifest itself in muscle growth when utilizing lower dosages of around 25 mcg per day or less. While higher dosages will also stimulate protein synthesis, they generally result in excess energy demands being placed on the body, canceling out any increase in muscle growth which might have occurred. When it comes to amplifying the growth process through T3 administration, more is certainly not better. Still, variances in the number of calories consumed relative to caloric need, as well as differences in metabolic rate, make a “one size fits all” dosing approach impractical. While those with a slow metabolism might have no problem researching 100 mcg per day without incurring muscle loss, others may find that they begin to lose muscle tissue at only 50 mcg per day. When bodyfat reduction is the goal, as a general rule, most individuals should begin their research at between 25-50 mcg per day and move up from there as needed.

T3 also assists in up-regulating beta 2 receptors, which are the same receptors activated by drugs such as Clenbuterol and Ephedrine. When administered long-term, these products lead to receptor down-regulation, preventing them (or any other drug which attaches to these same receptor sites) from eliciting optimal effects through receptor signaling. While adequate time off will eventually remedy this problem, T3 will help stave off the down-regulation process, allowing us to effectively use Clen and related ilk for a longer period of time. Along the same lines, T3 can also be used to assist in reversing receptor down-regulation after the offending drugs have been discontinued. Last but not least, T3 stimulates the proliferation of IGF-1 levels, promoting anabolic effects within muscle tissue. This increase is rather minor, making it a compliment to the drug’s primary effects.
One concern which seems surface repeatedly is the drug’s suppressive effect on endogenous thyroid production and the body’s ability to recover this production post-use. Fortunately, many of the scare tactics used by well meaning individuals are nothing but a bunch of nonsense. I have read many claims which state that T3 causes long-term or even permanent shutdown of one’s natural thyroid production, yet I have not yet read a single clinical study, nor encountered a single situation in real life, where endogenous production was permanently sidelined. In reality, quite the opposite has been true, with recovery occurring rather quickly, even in some cases where the drug was discontinued after years of replacement therapy. While I do not advocate continuous usage, the claim that normal 6-8 week cycles will lead to severe and long-term suppression just aren’t true. Regardless, dosage and cycle length should always be determined by one’s needs.

In conclusion, T3 is one of the most formidable fat loss weapons in our arsenal, capable of obliterating bodyfat and transforming the physique in relatively short order, yet this compound needs to be respected. Otherwise, the lifter runs the chance of experiencing unwanted side effects. When administered correctly, T3 remains a safe and effective alternative to the stimulant-based drugs so popular in today’s marketplace, capable of accommodating the goals is BB’rs, fitness enthusiasts, and the body-conscious individual alike.