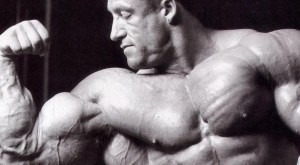 Nothing like a big blanket statement to kick off an article, “Don’t listen to Dorian!” By all accounts everyone in the industry would agree that Dorian Yates is one of the most progressive and straight forward thinkers in all of bodybuilding. He has a way of articulating his opinions so that the smartest Ph.D. and the greenest of newbies in the world can all understand what he’s saying. He introduced a training methodology to the masses that recreated High Intensity Principles into what we now just refer to as the “Dorian Split.” Although it’s massively popular, is it something you should even consider trying?

Who hasn’t been duped or influenced into trying a new training routine from your favorite IFBB Pro bodybuilder? I certainly am guilty as charged. I’ve tried everything from Jay Cutler’s volume approach, to Dorian’s H.I.T. to Ronnie’s H.I.T.-meets-Volume suicide mission. But with Dorian’s being the most popular routine, let’s discuss why it’s not the best program for just about anyone with a degree of sensibility.

So what is the Dorian Split for those not educated on the subject? It’s based around doing as little sets and reps necessary to achieve maximal results. Why keep annihilating a muscle if it’s already been stimulated to the point needed for growth? Dorian would argue that going beyond this point of fatigue is merely cutting into your recovery time leading to less growth. While that sounds great on paper, it has many flaws. Flaws you might ask? Well in theory it’s perfectly sound, you’re in and out of the gym in 45 minutes or less. You get to lift heavy, which everyone loves. And the split is also giving you ample time away from the gym to rest, eat, and grow. Sounds like a win-win doesn’t it?

Well here’s the crux in the whole Dorian Split: The vast majority of people who train do not use enough intensity to elicit the results Dorian intended when developing the program. I know we all think we’re training intensely, but I promise you, to deliver on the goods the way Yates would expect, most of us will never and can never go to the points of mental anguish he put forth on a daily basis. Couple the fact that the Dorian Split requires an intense focus on diet, because as we all know you grow away from the gym. Most people will simply not be on point enough 24/7 to yield the optimal results.

Now I know it’s a bold statement because everyone who trains likes to think they’re busting their asses. And surely some people reading this are equipped both mentally and physically to undergo the commitment involved in doing the Dorian Split, but again, unfortunately most are not.

And then there is the factor that nobody wants to discuss about 6x Mr. Olympia’s fabled routine: The extremely high risk for injury and plateau. Let’s think about the first part of that in more detail. In order to understand what true intensity is, it requires at least a few years of training under your belt. For most people that puts you into your early to mid-twenties. And for arguments sake we can pretend your diet is sound and you’re sleeping enough at night and earning a living that won’t cause too much stress. If this person sounds like you the window to take advantage of the Dorian Split is only 5-6 years. Once you hit your 30’s it’s not a good idea to be hitting maximal loads each and every workout. The adage, training smarter, not harder, comes into play. You may be invincible now, but one look at Yates’ torn biceps and triceps – from his own routine mind you, will close the case on that debate. I have seen plenty of guys over 40 trying to do this style of training and it pains me to see.

Now, move onto the second caveat in the above statement: plateauing. The guidelines to the Dorian Split clearly state the goal is to constantly progress in either reps or poundage each and every workout. Do we not see how short lived that will ultimately be? I don’t care how much tren or anadrol you take or how bad ass you think you are. There are not legions of Dorian Disciples walking the mean streets of Birmingham, England all squatting 1000 pounds – or is it stones over there? You get the point I assume. The human body can only do so much before the weight will turn its back on you.

So there’s your window. You have 5 or 6 years to get it done, if you don’t kill yourself in the meantime. And if you do make it out alive after that short training window and don’t reevaluate your training goals; Bam! You could find yourself in the ER with a torn pec, blown out knee, or mangled arm like The Shadow himself.

Words of advice: train hard, train smart; understand that everything works, but nothing works forever.