DMAA: Not Dangerous After All? 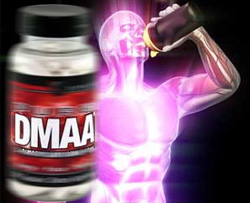 DMAA, also known as methylhexanamine or ‘geranamine’ is a controversial stimulant ingredient used in weight loss and energy supplements. In April of this year the FDA made a strong statement regarding its health dangers and its lack of legal standing as a nutritional supplement. Companies selling DMAA products for the most part stopped selling the stuff, and those who didn?t fully comply were subject to harsh enforcement actions by the FDA.

It took a long time for the FDA to act on DMAA, and that was in large part due to the fact that they really didn?t have clear cut evidence that the product was dangerous. Outcries by certain people that claimed the product was responsible for various adverse medical events and deaths however became louder and louder. These claims were not substantiated by any medical evidence though and so were not enough for the FDA to act upon.

The most publicized adverse health events regarding DMAA involved the US military. The deaths of four servicemen were being blamed on DMAA. As a consequence, the department of defense commissioned a safety study on the compound to determine whether it indeed was dangerous and to blame for the soldiers? deaths (as well as other medical incidents involving soldiers). This was to be the study that the FDA could rest its hat on and justify an emergency action against DMAA.

Things started getting strange though. The study was supposed to be finished in February 2012. That date came and went and no word on the study results were announced. Then word came that the study was taking longer than expected and would be done in December 2012. Well December 2012 came around and still no word. Months passed and no one seemed to be talking about the huge DOD study that was supposed to prove once and for all that DMAA was deadly.

Then in April 2013 the FDA announced that it considered DMAA illegal to sell and warned of a whole variety of potential health risks. No mention of the DOD study which was supposed to provide the scientific validation was made ? the FDA announcement was based simply on theory.

What happened to the DOD study? Well, in August the results were finally released (four months after the FDA?s arbitrary action). They were released with such lack of fanfare and media coverage that even I was not aware of the results until just today (almost two months later). Essentially they found that despite a high apparent usage of DMAA by soldiers (as much as 15 percent) the substance at doses recommended by manufacture poses a low risk of serious harm for most service members. The study basically exonerated DMAA from being responsible for the deaths of the four soldiers. They cautioned though that the ?potential? of DMAA to cause harm still exists and ongoing studies would be needed to fully understand the health issues (I guess two years wasn?t enough).

Anyway, I have my own take on this situation. I think it was clear quite a while ago that the DOD study was not going to provide the smoking gun that was expected and hoped for. At that point the results were kept hush hush and the FDA decided to act anyway against DMAA. Then they waited four months to quietly announce the study results ? so quietly that it took me six weeks to even be aware of them.

WASHINGTON?A safety review panel formed by the U.S. Army and the Department of Defense (DOD) has concluded DMAA (1,3-dimethlyamylamine) did not cause the deaths of four servicemen, but the substance still presents a health risk that should keep it banned from military stores. The panel’s report covers a two-year study of DMAA that began in 2011 after the soldier deaths and subsequent pulling of DMAA products from military shelves. The report was released recently by DOD’s Human Performance Research Center, a site for military members and their families to learn more about health, nutrition and other factors in performance.

The military pulled DMAA-containing products from base stores until a safety review could be conducted. A panel was assembled by DOD and the Army to investigate the relationship between DMAA and adverse events in the military, including the soldier deaths. The panel included representatives from the three service branches, as well as Health Affairs and Army Public Health Command.

The review was designed to follow the Institute of Medicine (IOM) report “Use of Dietary Supplements by Military Personnel”, specifically the use of reviews of original research and data on interactions. The safety review had three distinct phases: a literature review and medical care provider survey of adverse events; patient interviews of adverse events and review of AEs reported to FDA; and an Armed Forces Medical Examiner Service (AFMES) review and case control study of the association between adverse health effects and the consumption of DMAA-containing products. While officials originally targeted a February 2012 completion, phase three was not completed until late December 2012.

As apart of the review, the panel interviewed ten service members whose adverse event reports (AERs) contained identifying information, analyzed the death reports from the four service members who had taken DMAA, and conducted a survey of 1,789 Army soldiers to determine DMAA use and health problems.

The interviews about the AERs revealed the soldiers were mostly male and in their late twenties; seven had high BMI (body mass index), with three having a BMI over 30; and, seven members were tobacco users. The common reason for taking DMAA was for energy and performance benefits, and seven members reported using other energy boosters or dietary supplement containing DMAA. The range of symptoms noted included palpitations, dizziness and tingling.

The review of autopsy data in the death records of the four service members who had taken DMAA found no causation. ” It was the opinion of the AFMES that DMAA did not play a significant role in the deaths of these four Service members,” the safety panel report stated.

A similar conclusion came from the survey, which included 712 Soldiers who were considered as “cases,” having been diagnosed of cardiac dysrhythmia, heat injury, seizure, rhabdomyolysis, cerebral hemorrhage, acute kidney failure or acute and/or subacute necrosis of the liver during calendar year 2011, as documented in the Armed Forces Health Surveillance Center database. The analysis found compared to 1,077 randomly selected controls, these soldiers were no more likely to have used DMAA. However, some subgroup analyses showed links between DMAA use and increased risk of multiple adverse events; researchers also noted a possible association between frequent DMAA use and increased likelihood of heat injury and rhabdomyolysis (skeletal muscle breakdown that releases a chemical into the blood that can cause liver damage).

As part of its overall safety review, the panel met with three dietary supplement industry scientific experts and received information from USPLabs, as well as manufacturers and distributors of its Jack3D? and OxyELITE Pro? product, which had been two of the most popular DMAA-containing products on military bases?these products have since been reformulated to be DMAA-free.

Based on the evidence in all three phases of its review, the safety panel concluded despite a high apparent usage of DMAA among service members (as high as 15 percent), the substance, at the doses recommended by the manufacturer, poses a low risk of serious harm for most healthy service members. ” However, there does appear to be a significant association of DMAA use, particularly high frequency DMAA use, and multiple adverse event,” the panel wrote. “Further, the deaths, hepatic failure, myocardial infarction, heat stroke and rhabdomyolysis, seizure and stroke temporally associated with Service members? use of these products suggest that some individuals may be predisposed to severe health consequences after using DMAA.”

Further, the panel found no evidence of misuse or overuse of DMAA by service members who experienced adverse events, and they called the DMAA-associated health risk as low to moderate, reflecting the lack of causality found in the deaths, but also the seriousness of the events following DMAA use.

“The existing evidence does not conclusively establish that DMAA-containing substances are causally-associated with adverse medical events,” the panel wrote. “However, a consistent theme among the studies is that DMAA use potentially affects cardiovascular function, just as other sympathomimetic stimulants. Without further rigorous study designs developed to evaluate the safety of DMAA, especially in patients with concomitant use of other substances, co-morbid conditions and high frequency use, the magnitude of the association of DMAA with adverse medical events is uncertain.”

Despite seemingly exonerating DMAA in the deaths and serious adverse events, the panel found enough evidence of potential associated increased risk and recommended the military continue to ban DMAA-containing products from base stores.

The recommendation may be a formality, as the major manufacturers and marketers of DMAA-containing products either stopped producing such products or reformulated to be free of DMAA after being warned by FDA in 2012 that the substance was not legal in dietary supplements and being subject to a subsequent class action lawsuit. In fact, USPLabs was the last major holdout, but the company said in April 2013 it would remove DMAA from its products.