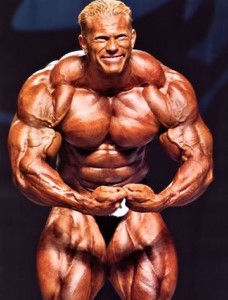 It’s almost hard to remember the last time Dennis Wolf has not been in contention to win nearly every show he has entered. Although he didn’t win the 2013 Mr. Olympia and it was clear that he wasn’t on anyone’s radar to place in the top 4 in preshow discussion, the 3rd place finish and performance he put on in Vegas was nothing short of his all-time best. So I ask the question: Is Dennis Wolf now a contender or still a pretender?

We all know the knocks on Wolf’s physique: no calves, high lat insertions, and under developed glutes and hams most noticeable on back poses. We also know that he’s notorious for missing his mark on game day. His stomach is apparently a bottomless pit that can’t consume enough carbs to stay full and hard. What we noticed at the Olympia was that Wolf wasn’t necessary bigger in his problem areas, but more so that he was able to not come in flat, creating the illusion of less weakness.

And boy did it pay off. He had better and lower lat tie-ins and his hamstrings were clearly deeper and meatier than we’ve seen in the past. His calves were still non-existent, but frankly it didn’t matter. He was so markedly improved it was easy to overlook calves the same way we have all done with Dexter, Ronnie, and several other champion bodybuilders in the past.

So what does this mean for Wolf? Can he really compete with Phil and Kai and make it a three man race for the Sandow trophy? With his size at nearly 270lb on stage and impressive height at 5’11”, it leaves a lot of room for error. He takes a big risk by skipping shows like The Arnold Classic to prep for just this contest. I’m quick to discount the European Tour following the Olympia as all of the competitors are in cruise control on their diets and training. A win at a show like the Arnold Spain or Prague Pro would still essentially give Wolf plenty of time for an off season and contest prep.

My answer to this question is, yes. Phil Heath and Kai Greene officially need to be on notice that Dennis Wolf is a legitimate threat to them in any contest they entered. Until two weeks ago at the Olympia, we had nothing to base Wolf on aside from a huge fan base and tons of potential. It was the potential we all saw in Wolf since he burst onto the bodybuilding scene in 2006 and won his first show in 2007 at the Keystone Pro. The talk back then was, “just wait, The Wolf is coming.” Well, it’s safe to say The Wolf has arrived.

We know a 2013 Mr. Olympia version of Wolf can without question knock off a waterlogged Kai Greene or a flat Phil Heath. It’s clear that Dennis has the goods to beat anyone as long as he doesn’t eat the wrong kind of oatmeal cookie where before it was simply a lot of wishful thinking.

From a personal standpoint I’m relieved Dennis is hitting his stride in bodybuilding, because after watching Generation Iron the odds of him becoming the next great European bodybuilder to make it into Hollywood is about slim to none.

Cheers to Wolf, you’re officially a contender and not a pretender.

Newer Post
DMAA: Not Dangerous After All?
Older Post
Ferulic acid improves performance over a period of consecutive days