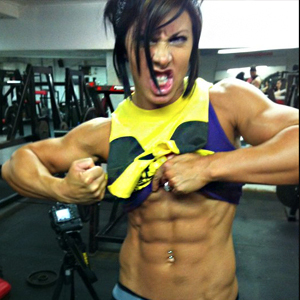 What about I’m about to say shouldn’t come as a surprise: Dana Linn Bailey is a superstar. Very rarely do we see someone be as captivating and polarizing as DLB. Maybe it’s the hair style, the bad ass training videos, or the duck face selfies on Instagram. Or maybe it’s something bigger than that. In a world of beautiful bodies, when even the best can get lost in the shuffle, Dana has found a way to rise above the rest.

DLB’s popularity is something that of a superhero. Her lines at expos rival any top names the IFBB has produced. Her clothing line, Flag Nor Fail, run by her and husband, Rob, hasn’t seemed to cool off since it began a few years back. And I can’t lie—some of Rob’s music from, “Battle Tested” has reached the ear buds on my iPod from workout to workout. I haven’t gone so far as to buy a cutting board from these two, but who knows? It might be in my future.

Off the stage, life couldn’t be better for Dana. It’s been on the stage where things have been rocky. She started her career in the figure division, but could never find steady ground with her athletic build and rock hard physique. Luckily for her, Women’s Physique was a new budding division for the girls not freaky enough for bodybuilding and for the figure girls who were training themselves out of the division.

WPD sounded liked a perfect fit for Bailey. She steam rolled through the NPC with a 1st place and overall win at the 2011 Junior USA’s earning her IFBB pro card. Entered her first pro show at the 2012 Desert Muscle Classic and placed a respectable 4th. Looked to do one better a few months later at the New York Pro, but ran into a brick wall and placed 16th. In any new division still in its infancy, everyone including the judges is trying to figure out what the standard is. For DLB she happened to be a victim of those circumstances. Anyone who looked at the pictures from her pro debut to her 16th place in New York would have a tough time seeing a difference.

Like a true competitor, Bailey continued to train and returned to the stage a little over a year later at the PBW Tampa Pro. With more time for the pro league to iron out what direction this new division would take it was clear after watching prejudging that DLB would have a definitive spot amongst the brightest and best the IFBB WPD has to offer. She emerged in 2nd place out of 39 athletes.

Beyond the callouts and the often times cheesy slogans I’m more in awe by her popularity. I moved to Jacksonville, Florida just under a year ago and started training at a Powerhouse Gym near my new home. Since my schedule is all over the place I go to the gym at different hours almost every day. One day I saw a girl there that looked just like Dana. Same hairstyle – different color; similar physique – not as good; and dressed in identical workout clothes – couldn’t quite pull it off. Needless to say, I was looking at a super fan. Fast-forward a few months. I hadn’t seen this woman in a while and there she was: decked out in Flag Nor Fail clothes, abs showing, dark hair to match DLB, and you guessed it, ‘Duck Facing’ her cell phone.

Don’t think this fanaticism is coming just from other chicks either. There are plenty of dudes who follow her around like a rock star. It’s nothing to be ashamed of; judging from her workouts she would have me face down in a bucket leaving me to look like Jason Genova after a PJ Braun leg workout. And not to knock all of the other hard training, beautiful girls in Women’s Physique, but they all tend to blend together. Everything is big: big hair, big boobs, big makeup, and big muscles. DLB catches everyone’s eye for better or worse, because she’s her own person and guys love that.

This is just the start of the Dana Linn Bailey brand. My prediction is that Women’s Physique is on the verge of exploding in popularity and she, along with other stars Karina Nascimento and Juliana Malacarne will lead the charge and trail blaze for a new generation of women who are looking to make female muscle not only beautiful, but accepted.

Newer Post
Animal study: strength training without steroids is good for heart and blood vessels
Older Post
Drugs in Sports – Then, Now, and Beyond