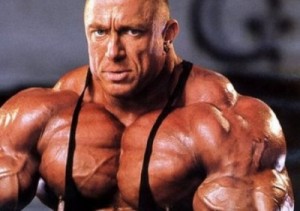 The most common reason an individual transfers over to long-term use is usually to accelerate progress. This can be accomplished in two different ways. One, by remaining under the influence of these drugs indefinitely, the individual is exposed to their muscle-building effects for a longer period of time, thereby allowing him to advance more rapidly. However, for traditional cyclers considering making the switch to continuous use, their expectations may exceed what is found in practice. This is because AAS do not demonstrate a linear relationship between muscle growth and time of exposure. In other words, the amount of time spent using steroids does not directly correlate with the amount of gains one will make. The longer steroids are utilized, the less impressive the gains will be. There are several known physiological factors responsible for the decrease in growth rate that occurs with prolonged exposure. So, one should understand ahead of time that making the jump to continuous use is no guarantee of a dramatically accelerated growth rate.

However, if the BB’rs wants to develop his musculature considerably beyond his natural threshold, at some point, the traditional “time on= time off” method will no longer be sufficient for continued growth. This does NOT mean the individual must make the extreme transition from traditional cycling to constant use, but he will have to stay on for a greater portion of time relative to his time off. This is because the body’s natural hormonal environment is only capable of supporting a predetermined amount of muscle tissue and a soon as it exceeds that point, exogenous hormones will be required not only to maintain that extra mass, but to build additional tissue, as well. As a BB’r continues to gain a greater amount of muscle tissue and moves further and further away from what can be supported by his natural hormonal environment, the more drugs he will need to administer in order to make up for the deficit. In the same way, the more muscle mass a BB’r has, the more difficult it will be for him to maintain that mass once steroids are removed from the picture. The bottom line is that increased development leads to increased anabolic demands. This is why a BB’r, by the time he reaches pro size, must use more drugs than what was needed in the beginning of his career.

It is impossible to say at what point an individual might need to stray from traditional cycling and increase his amount of on-time, as there are simply too many variables which can affect the outcome. Some guys can grow very large while never veering from the traditional cycling format, while others struggle immensely just to look slightly impressive. The take home message is that this decision should only be contemplated once the BB’r has exhausted his ability to make further gains with traditional cycling.

We have looked at this decision from a progress point of view, but how about from a heath perspective? With AAS, the longer you take them (assuming all other factors are equal), the greater the potential impact they can have on your health. The most important system affected by AAS is the cardiovascular system, as AAS in general can have several adverse effects in this area, such as: elevated blood pressure, altered lipid profile, and elevated hematocrit. There are also less well known and less understood risks, such as heart enlargement, heart muscle damage, and altered cardiac function, but most BB’rs choose to focus on the former, as they have been unequivocally linked to heart attack and/or stroke. Keep in mind that this association is not to be taken lightly, as the percentage of BB’rs who have died from steroid-induced heart attack or stroke is alarmingly high. Most of these cases go unnoticed, as the majority of individuals who die from these ailments are not professional athletes (therefore they don’t draw public interest). In addition, with such a large number of people in the U.S. and abroad dying from cardiovascular disease every day, rarely is the individual’s death attributed to steroid use. Instead, the examiner simply lists the cause of death as coronary artery disease-myocardial infarction. No connection between steroids and the individual’s premature death are ever made.

One disturbing trend which is closely related to the cycling vs. continuous use debate and has taken root in the minds of many of today’s young BB’rs, is the flagrant disregard for the health-maintenance of the hormonal-reproductive system. Many seem to share a belief that they can use as many steroids as they want, for as long as they want….and as long as they implement a proper PCT at the conclusion of their multi-year cycle, all will be well. Let me tell you, this is frequently not the case. Many retired, as well as currently active BB’rs are no longer able to produce adequate amounts of endogenous testosterone, regardless of how many PCT drugs they shove down their throat or inject into their bodies. In the same way, the reproductive system can suffer permanent damage with extended use. It is not uncommon for long-term steroid users to experience problems with fertility, even to the point that medical intervention becomes necessary after years of unsuccessfully trying to conceive. While a recovery can usually be made, it is not always easy, often requires long-term medical supervision, and can force a couple to postpone their plans to start a family. In a worst case scenario, there are no children at all.

One of the problems with many young, aspiring BB’rs (and young people in general) is that their life choices are based in the here and now, with little to no concern for how their decisions might impact them later in life. Blinded by their passion they throw caution to the wind and in doing so, may end up regretting the manner in which they pursued their dream. I have often heard young BB’rs say that having children doesn’t matter to them…or that their BB’ing dream is more important. They may feel this way now, but they may feel quite different by the time they hit their 30’s. Even if these individuals don’t change their minds and never end up wanting children, there is a very good possibility that their future wife will. It is important that the BB’r understands and weighs the potential risks involved before embarking on a venture which could result in the need for things such as life-long hormone replacement therapy and years of fertility treatment because after these decisions are made, time cannot be turned back.

Most of the side effects of steroids can be controlled through preventative action and a bit of common sense. There is no need for a BB’r to die young or live with serious physical ailments because of his lifestyle choice. Still, there are no guarantees; sometimes shit just happens. A user may be predisposed to certain conditions or demonstrate intolerance to some or many of the deleterious effects of AAS. So, those BB’rs who choose to stay on continuously would be wise to take preventative action, including the routine monitoring of vital health markers.

One definite advantage of staying ON is that the BB’r does not have to contend with the emotional or physical ups & downs which accompany traditional cycling. There is a not a single BB’r alive who likes watching his newly built muscle wither away during his OFF time. For many it can be emotionally stressful and even depressing. After all, with the amount of time & effort the typical BB’r invests in this sport, it is not unreasonable to expect some degree of emotional backlash. This seems to occur more frequently in younger BB’rs than in the older guys. This is just the result of growing up. The more mature BB’r is able to evaluate his situation more clearly and view it from a long-term perspective, while the younger guys are usually more affected by the here and now.

Another benefit of staying ON is improved hormonal stability. Now, don’t misunderstand me on this one. I am NOT saying it is healthier for the body, in general, to stay on drugs for a longer period of time. However, the constant ups & downs involved in the cycling process never allows the body to acclimate itself to its current hormonal environment. By remaining relatively stable in our PED use, certain side effects tend to diminish, particularly those related to how we feel. In the same way, by avoiding regular off time, we don’t have to contend with the testosterone level of a little girl during the first few weeks of PCT. All in all, it is a much smoother process.

While there are several other areas we could’ve covered in regards to the risks & benefits of continuous use, I chose to focus on a few key areas. Particularly, I wanted to touch on those aspects of our health which are likely to incur long-term damage by staying ON. I also wanted to look at some of primary benefits experienced by staying ON.

Final Considerations
Whether you opt for continuous use, prefer to remain faithful to the old-school approach, or settle somewhere in the middle, it is a decision only you can make. I strongly recommend taking a long, hard look at your goals, genetic capacity, overall health, genetic predispositions, and willingness to assume risk, as well as your work ethic, financial status, long-term side effects, and the perceived benefits you will receive based on your choice. It is not a decision to be taken lightly, so if you are indecisive, wait it out before making any changes. As most know, I am not opposed to doing what it takes to achieve one’s goal of becoming a pro BB’r, so long as the plan is well thought out, a back-up plan is in place, and the individual goes about achieving his dream responsibly.