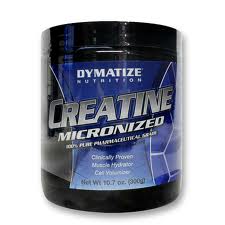 Creatine, the most studied and probably the most effective sports supplement, reduces the concentration of antioxidants in the blood. Brazilian researchers at the Federal University of Para discovered this in an experiment they did with a few dozen handball players. The Brazilians did not discover any adverse health effects.

The Brazilian study lasted 32 days, during which 26 male handball players did weight training. Some of them took nothing [COT], some were given a placebo [GP] and others were given creatine [GC]. The athletes in the creatine group were given 20 g creatine every day for the first five days, and then 5 g for the remaining days.

The supplementation had no effect on body composition. The weight with which the athletes could do maximal 1 rep did increase, as is shown in the simplified table below. If you click on it, a table with more information will appear. 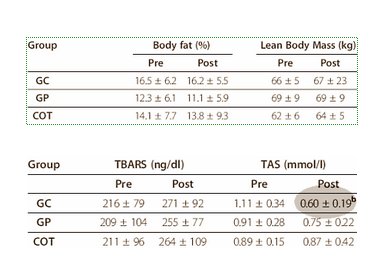 The amount of antioxidants [TAS] in the players’ blood decreased, as shown in the table above. This table is also a simplified version. Click on it for the full figure.

If the antioxidant levels in athletes’ blood decline, you’d expect an increase in the concentration of thiobarbituric acid reactive substances [TBARS]. The more thiobarbituric acid reactive substances there are in your blood, the more fatty acids in cell membranes are damaged by aggressive molecules – the free radicals. Normally antioxidants clear up free radicals.

But as you can see, there is no evidence of a statistically significant rise in the concentration of TBARS.

“These results suggest that creatine supplementation, despite promoting acute muscle strength improvement, may be harmful as it induces oxidative stress and decreases total antioxidant status”, the Brazilians conclude. “Nevertheless, further research is needed in this field to fully attest these results.”

Antonio found the Brazilian study ‘interesting’ but doubted whether the measured effects would have medical consequences. Animal studies have shown that mice live longer if they are given a small amount of creatine in their food, was Antonio’s response.

“Unless someone can demonstrate that having greater oxidative stress with creatine supplementation in turn causes something of clinical significance, then in my opinion, this study will be a mere footnote in the annals of sports supplement research”, added Antonio.

Effects of creatine supplementation on oxidative stress profile of athletes.

Creatine (Cr) supplementation has been widely used among athletes and physically active individuals. Secondary to its performance-enhancing ability, an increase in oxidative stress may occur, thus prompting concern about its use. The purpose of this study is to investigate the effects of Cr monohydrate supplementation and resistance training on muscle strength and oxidative stress profile in healthy athletes.

We conclude that Cr monohydrate supplementation associated with a specific resistance program promoted a meaningful increase in muscle strength without inducing changes in body composition. The observed significant increase in uric acid and the decrease in TAS suggest that creatine supplementation, despite promoting acute effects on muscle strength improvement, might induce oxidative stress and decreases total antioxidant status of subjects.