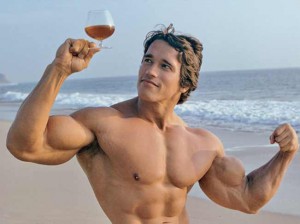 Why are people so hypocritical? These days you would think the average bodybuilder is as guilty as a black guy walking through a Korean liquor store in Southern California. I remember when people were embarrassed to be out of shape and now it seems like it’s a rite of passage to be a sweaty fat slob. Since when did it become so strange and out of this world to see someone in public that actually takes care of themselves? It doesn’t matter if I’m at the grocery store, getting my oil changed, or even at the gym, somebody is in the background snickering, “that dude’s on shit!” Can you believe it? It’s so out of the norm nowadays to see a young or middle-aged man with a vein running down his bicep that he clearly must be on something. I’ve been getting accused of taking gear well before I ever heard the words Sustenon or Anadrol. And then there are the real ignorant folks who still believe creatine and protein drinks are steroids. It’s amazing to think these people are still allowed to vote, bear children, or get behind a steering wheel.

What really sets bodybuilders apart from the rest of the world is our ability to think outside of the box and live on our own terms. Most people are drones who either never question authority or, if they do, don’t have the balls to follow anything up. The way the world, but largely, America, is set up these days, they want their people to be obese, addicted, and completely reliant on Uncle Sam to take care of them. The last thing any government wants is a healthy bodied alpha male, physically capable of kicking somebodies ass, oozing with confidence, with the ability to make rational and unbiased decisions. Hence, alcohol, tobacco, and corn are legal, and testosterone and growth hormone are not.

Look at what’s happened with professional baseball over the past 15 years. Prior to Mark McGuire, Barry Bonds, and Roger Clemens getting dragged before the US Congress to testify on their PED use, the very mention of steroids in sports was practically never brought up in the media. Everyone knows they work and that’s exactly what scares the leaders of the country. We can’t have the youth of America being jacked up and fit, while its fat and unhealthy counterparts are dying off at a steady clip. So what happens? Media vilifies their athletes, bars users from their Halls of Fame, dismantles a billion dollar Nike Livestrong brand, and all the while drills you in the backside with their Low T commercials airing on the Golf Channel. Wait, what just happened here? Yup, we’ve all seen it, the media has crucified its younger male population for using dangerous and harmful, even deadly drugs; but if you’re over the age of 50 and have consulted your doctor, we’ve got the solution for you: 200mg of Test Cypionate per week and 2-4 IU’s of growth hormone a day.

The government and its media puppets have slowly started to make testosterone and HGH use ok, as long as it’s only being prescribed to the Baby Boomers, because after all, the last thing they want is a healthy type-A, Generation X male lurking around the streets of Middle America stirring up the masses. Who else do you think invented the phrase, “roid rage?” I can guarantee you it wasn’t Ben Affleck’s girlfriend in the made for TV movie, “A Body to Die For.” Ever since steroids hit the black market, the boys on Capitol Hill have been strongly against their use. Every bar fight, domestic dispute, speeding ticket, or wrestler murders family in a murder/suicide all seem to trail back to some guy pumping grams of tren into his ass. It couldn’t have been the 18 Miller Lights he drank while watching NASCAR or the half bottle of Jack he downed at the local drinking hole or the 15 concussions that caused severe brain damage. That would be too obvious and certainly not sexy. Unfortunately for men 24 to 45, this is a time in America where the average person is 30lb overweight and where the fit, clearly get shit on for looking good and taking their hormone health into their own hands.

If Ronald Regan can have his War Against Drugs and lock up millions of black and brown skinned men for decades at a time, just imagine how staggering the numbers would be if a similar crusade broke out in America declaring a War Against Obesity. Fat camp jails would be sprouting up on every corner housing Soccer Moms and middle-aged businessmen from New York to L.A. And it doesn’t stop there. 2016 Presidential Candidate and current New Jersey Governor Chris Christie recently had lap band surgery. I’m sure he figures if he ever plans on sitting at the Oval Office he’ll first need to squeeze his fat ass through the White House doors.

How’s that for hypocritical! In order to have a chance in hell to win the election in 3 years, Christie clearly knows he won’t win the support of the American people unless he first loses a few hundred pounds. And the same people he will be pandering at for votes are the same fat asses that can’t stop shoveling Krispy Kreme donuts down their mouths 2 or 3 times a week. So performance enhancement surgery— because that’s basically what it is—is ok for Chris Christie, a potential president to use, but they’re bad for our pro athletes, combat soldiers, and basically anyone else under the age of 50 who wants to kick ass at life. Got it!

When I first started training 16 years ago nobody ever once told me I might be looked down upon for training and aspiring to look good. But this is what society has become; full of jealous haters who lack anything that resembles self-control and are open to cheating or taking advantage of the system when it suits their needs. Hypocrisy is around us daily, in all walks of life, but in bodybuilding, the hate and haters run wild.

Until next time, follow me on Twitter @MattMeinrod or you can read my archived articles on www.MattMeinrod.com