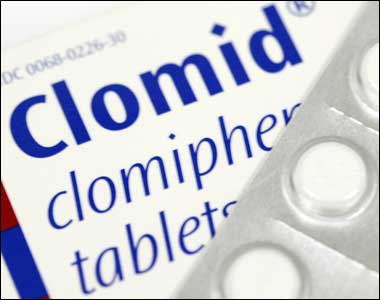 Nearly every BB’r is familiar with the name. It is one of the oldest, yet most effective drugs for the treatment of both testosterone and sperm deficiency. In the medical community it has long been established as the gold-standard for inducing ovulation in women and increasing sperm count & motility in men. BB’rs typically use the drug for PCT (post cycle therapy); a practice engaged in by millions of steroid users world-wide. It would be foolish to discount the role this drug has played in modern steroid culture and even today, it does not appear to be in danger of replacement any time soon.
Also known as Clomiphene Citrate, Clomid is what we call a selective estrogen receptor modulator (S.E.R.M.). Its primary function is to stimulate the testes to produce testosterone and sperm, which it accomplishes through a through a fairly elaborate process. Clomid initiates this process by attaching to estrogen receptor sites in the hypothalamus, preventing circulating estrogen from attaching to these receptor sites. Because these receptors are occupied by Clomid, the hypothalamus is not able to detect the true level of estrogen in the body and therefore, thinks there is an estrogen deficiency. This is called inhibition of the negative feedback loop.

After the hypothalamus recognizes the need for additional estrogen, it releases a hormone called GnRH, which orders the pituitary to secrete both LH (leutinizing hormone) and FSH (follicle stimulating hormone). Upon entering the bloodstream, these hormones travel to the testes, signaling them to produce both testosterone and sperm, respectively. This effect will persist for as long as Clomid present and active.

While Clomid can be used for other purposes, this is its main application in the BB’ing community. More specifically, it is typically employed during PCT, in order to help the body restore deficient levels of testosterone and sperm. Oftentimes, BB’rs tend to look at “recovery” as nothing more than the restoration of testosterone levels, but this is far from the truth. In reality, steroids adversely affect multiple bodily systems, all of which should be considered when seeking normalization of the body post-cycle. Two frequently ignored aspects of recovery are the restoration of sperm count & motility. This is especially important for the young, as a properly functioning reproductive system will be appreciated when either the BB’r or his wife decide to start a family.

In comparison to other S.E.R.M.S., such as Nolvadex, Clomid is my preferred choice, due to its more comprehensive nature. It is more effective at increasing sperm count and improving motility (hence, it is the #1 most prescribed fertility treatment in the world), while being equally proficient at elevating testosterone levels. When used for PCT, Clomid is typically administered in a single dose at 50-100 mg per day for a period of 4-6 weeks in length. Some users elect to go up to 150 mg daily, although this is less common. In most cases, Clomid is simply one element in a more thorough post-cycle therapy program, in which both a S.E.R.M. (Clomid) and an anti-estrogen (Aromasin) are combined for superior overall results. Anti-estrogens have also been proven effective for elevating testosterone levels, as documented by multiple clinical studies. When these two drugs are used in concert, a more dramatic effect is achieved.

Some individuals have complained or expressed concern over side effects associated with Clomid use. Some of these potential side effects, such as alterations in visions, are very rare and should not discourage one from using this serm. One doctor, whom I will not name here, has been treating patients with Clomid for 20 years. During that time, he has seen only two individuals complain of vision changes and in both cases the changes were reversed upon cessation of the drug. For further confirmation, a quick search of the BB’ing boards will reveal 100’s, if not 1,000’s of documented experiences, almost all of which are completely devoid of this side effect. Others have noted emotional changes with Clomid, although they are generally transient and mild in nature, if you experience them at all. Many do not. Overall, the drug is well tolerated, with a high rate of user compliance.

There is an ongoing argument as to which S.E.R.M. is best, with some claiming Nolvadex to be superior, while others stand by Clomid as the better drug. Both work remarkably well, prompting some to combine the two for optimal results. This is likely the ideal situation. While they both do essentially the same thing from a recovery perspective, there are positives and negatives associated with each. For example, Nolvadex is stronger per mg, as it results in roughly the same degree of testosterone elevation at 40 mg per day as Clomid does at 150 mg daily. However, I find this argument to be irrelevant, as the total amount of mgs used it not what matters. What is important is how well each drug elevates testosterone when using a maximally effective dose. Let’s compare 2 common aromatase inhibitors in order to make my point. Arimidex is usually dosed at only ½ -2 mg daily, while Aromasin if often dosed at 25-50 mg per day. Does this mean Arimidex is better? Of course, not…it simply means that Arimidex requires a smaller dose in order to elicit a maximum effect. However, when both drugs are administered within their own optimal dosing range, Aromasin produces at least an equal inhibitory response. Besides, the strength of as compound should not be your sole consideration, as Aromasin has additional benefits not found with Arimidex, such as the inability to cause estrogen rebound and being more forgiving on the lipids. One must evaluate the full range of effects with each drug before making a determination of superiority.

Along those same lines, Clomid possesses some benefits Nolvadex does not. In the medical community, Clomid is the first line of defense in the fight for female and male fertility all over the world. The reason for this is simple…it simply works better in this regard. With the health of the reproductive system being a primary concern during PCT (or at least it should be), this benefit has significant value. This makes Clomid the more comprehensive recovery drug. On the flip-side, Nolvadex has a positive effect on cholesterol values, which can be helpful for those who struggle in this area, but it also reduces circulating levels of IGF-1; a key hormone involved in the muscle building process. I could continue, but you get the point. When evaluating the full range of effects for each drug, in my opinion, Clomid takes the cake as the S.E.R.M of choice. Now, not everyone feels the same way I do, so you may want to conduct your own research in the search for answers.
Still, I believe this entire versus debate is not one we should invest much time on, as our primary focus should be on getting the best results possible. Towards this end, the concomitant administration of both drugs has proven superior to using either one alone. However, if I were going to choose just one, you know what my choice would be.