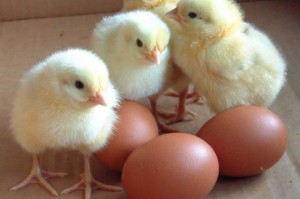 Many men have prostate cancer without even realising they do. The lucky ones will never get to know this either. The disease develops so slowly that they will have died before the cancer has become noticeable. The chance of this happening is lower if you eat large quantities of chicken and eggs, epidemiologists at Harvard University discovered.

One in every two British men will hear during his lifetime that he has cancer, Cancer Research UK announced recently. [bbc.co.uk 19 December 2012] Men are reaching older ages and methods of detecting cancer are improving, so doctors are discovering more and more cases of the disease, including prostate cancer. This development means researchers are not only studying the relationship between diet and cancer prevention, but also the effect of diet on your survival chances if you already have cancer.

Epidemiologists at Harvard announced in 2006 that fish and tomato juice or tomato sauce delay the development of prostate cancer. [Cancer Causes Control. 2006 Mar; 17(2): 199-208.] Every two portions per week consumed reduce the chance of progression by 17 and 20 percent respectively, according to the researchers.

One food item that has a considerably less positive effect on the survival chances of men with prostate cancer is – strangely enough – chicken, another group of Harvardians discovered. While chicken would seem unlikely to have negative health effects, data collected in the Cancer of the Prostate Strategic Urologic Research Endeavor study shows that, for men in which doctors had discovered prostate cancer, high consumption of chicken can quadruple the chance of the disease progressing. [Am J Clin Nutr. 2010 Mar;91(3):712-21]

The figure below shows the relationship. The squares represent men for whom doctors predict that they have a high chance of dying from the disease. [PSA greater than 20 nanogram per millilitre or a Gleason score of 8-10]. The triangles represent men who have more luck.

When the researchers went through their data they saw that the cancer developed more quickly in men who ate the chicken skin along with the meat. This did not happen in men that ate their chicken without the skin. So chicken breasts are safe, but drumsticks aren’t.

The same Harvard researchers recently published the results of another study which shows clearly that a diet that includes high numbers of eggs is perhaps not suitable for older men. [Cancer Prev Res (Phila). 2011 Dec; 4(12): 2110-21.] This time the epidemiologists used data on over three thousand men with prostate cancer who were participating in the Health Professionals Follow-up Study. The researchers were trying to establish a relationship between diet and death.

The table below comes from this study. Interestingly, red meat did not worsen the chances of the men. Right at the bottom of the table you can see the most important relationship that the researchers uncovered. A high intake of whole eggs, including the yolk, doubled the chance of men with prostate cancer dying. ‘High’ means more than 2.5 eggs per week.

“Although our results are novel and additional large prospective studies are needed, caution in egg intake may be warranted for adult men”, the researchers conclude.

We are of course just stupid and ignorant journalists, so you should take the interpretation below with a pinch of sodium chloride. We have written a number of times about studies that have found a relationship between disease and egg yolks. Chickens store fat in egg yolks. If you eat chicken with the skin on, you consume subcutaneous fat. Fat again.

It may be the case that chicken store substances in their egg yolks and body fat that are not good for humans. We have a sneaking suspicion that consumers are paying for the garbage that humanity is dumping on our planet’s ecosystem.

Egg, red meat, and poultry intake and risk of lethal prostate cancer in the prostate specific antigen-era: incidence and
survival

Red and processed meat may increase risk of advanced prostate cancer. Data on post-diagnostic
diet and prostate cancer are sparse, but post-diagnostic intake of poultry with skin and eggs may
increase risk of disease progression. Therefore, we prospectively examined total, unprocessed, and
processed red meat, poultry, and eggs in relation to risk of lethal prostate cancer (e.g. men without
cancer at baseline who developed distant organ metastases or died from prostate cancer during
follow-up) among 27, 607 men followed from 1994–2008. We also performed a case-only
survival analysis to examine post-diagnostic consumption of these foods and risk of lethal prostate
cancer among the 3,127 men initially diagnosed with non-metastatic prostate cancer during
follow-up. In the incidence analysis, we observed 199 events during 306,715 person-years. Men
who consumed 2.5 or more eggs per week had an 81% increased risk of lethal prostate cancer
compared to men who consumed less than 0.5 eggs per week (HR: 1.81; 95% confidence interval
(CI): 1.13, 2.89; p-trend: 0.01). In the case-only survival analysis, we observed 123 events during
19,354 person-years. There were suggestive, but not statistically significant, positive associations
between post-diagnostic poultry (HR ≥3.5 vs. <1.5 servings per week: 1.69; 95%CI: 0.96, 2.99; ptrend:
0.07) and post-diagnostic processed red meat (HR ≥3 vs. <0.5 servings per week: 1.45;
95%CI: 0.73, 2.87; p-trend: 0.08) and risk of progression of localized prostate cancer to lethal
disease. In conclusion, consumption of eggs may increase risk of developing a lethal-form of
prostate cancer among healthy men. read entire study…