Add 2 Inches to your Arms Overnight 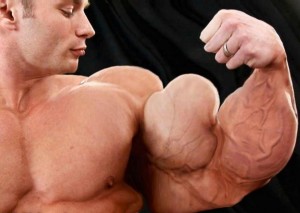 Nearly everyone has at least one bodypart that, despite our best efforts, refuses to grow at the same rate as the rest of the body. While this generally isn’t too big of a deal for the recreational BB’r, when it comes to the serious competitor, particularly those who stand make a living from the sport, proportion issues can mean the difference between success and failure.

For years there was little that could be done to correct such muscle imbalances. By and large, BB’rs were at the mercy of their genetic lineage, but this did not stop them from doing their best to change the hand they had been dealt. As a result, various and sometimes odd training programs were concocted, which promised to help transform these lagging bodyparts into strong ones. This practice was well noted as early as the 1940’s and continues to remain an integral part of the training experience today, which is evidenced in the success of programs such as FST-7. While the principles on which many of these training systems rest are not necessarily based on credible science (fraudulent marketing is better than no marketing) one cannot deny the positive impact that intelligent training can have on muscle growth.

Still, even the most effective training systems are incapable of correcting all weak points. How many BB’rs out there would love to be able to be able to add a guaranteed 1-2 inches to their arms or calves before their next show, even if the effect was only temporary? If the commercial success of products such as Synthol are any indication, there are quite a few BB’rs who would answer yes to that question. Although fairly rapid results in size can be obtained with SEO’s and a portion of the gains are permanent, even the best application technique can sometimes result in mild disfigurement and/or a reduction in muscle detail-sharpness, especially when larger quantities of oil are administered. This is often the result of sub-q water build-up around the treated muscle; a further liability for competitors. At any rate, these products can and often do reduce muscle quality to some degree, so be careful if you choose to go this route at some point down the road.

Rather than subjecting oneself to weeks of daily injections, the ideal compound would be capable of eliciting near instantaneous increases in muscle size without any of the negative side effects associated with site enhancement oils. It would be able to temporarily add 1-2 inches to a bodypart like the arms or calves in just a few hours or days of use without any detrimental effects on appearance. Fortunately, such a product has been available for over a decade by the name of Nolotil. Although Nolotil is normally only used by advanced competitors, it can be used by anyone who desires to experience the drug’s effects.

So, what is Nolotil? Nolotil belongs to a diverse group of lipid compounds called prostaglandins (also known as eicosanoids). These locally acting chemical messengers are synthesized when needed and display a wide variety of physiological effects in the body. They are not systematic in nature, but are rapidly metabolized after accomplishing their function at the site of synthesis. For the purpose of this conversation we will limit ourselves to only one of their functions; that of inflammation, as it is this function that is primarily responsible for the muscle swelling effect experienced when using Nolotil.

You know the increase in muscle fullness you experience the day after a tough training session, which usually hangs around for a couple of days then goes away? This increase in fullness is largely the result of inflammation. When we expose our muscles to the metabolic stress of a hard workout, the body interprets this stress as muscle injury, which kicks off a cascade of physiological events leading to the local production of prostaglandins. Although greatly exaggerated, it is through this same mechanism that Nolotil exerts its profound muscle swelling effect.

As with steroids, Nolotil is administered via intramuscular injection. Its use is limited to those muscle groups which allow for the even dispersion of the compound throughout the entire muscle, such as the biceps, triceps, traps, and all 3 delt heads. Large muscles are impractical for this reason, so they are usually avoided. When it comes to application, proper technique is critical. Let’s use the biceps as an example.

As with any Intramuscular injection, the injection site should be properly sterilized prior to injection. This is especially true before a contest, as a last minute infection can derail months of hard work. Generally speaking, a 1 inch needle is preferred, so as to avoid unsightly surface knots and/or welts. Each head of the biceps should receive 2-3 injections along the length of the bicep, with one injection near the delt, on near the mid-point of the bicep, and another about 1-1.5 inches from the bottom of the bicep. The biceps are a highly vascularized muscle, which significantly increases the possibility of injecting into a branch of the circulatory system. Therefore, it is important to aspirate before every injection.

In terms of dosage, Nolotil comes in 5 ml ampules. A typical dose for a muscle like the biceps would be as little as 1 ml to as many as 5 ml, although 2.5-5 ml is considered a more normal dose. Regardless of which dosage you choose it should be evenly divided between each injection for that muscle. So, if injecting 3ml into the biceps, .5 ml would be injected into each of the 6 injection sites. Immediately afterward the arms should be trained with a light training session. This helps ensure that the active ingredient is evenly dispersed throughout the muscle. Increases in size will be apparent within just a few hours. This process can be repeated for 2-3 days, although many will find their results to be more than adequate with just 1-2 applications. Unfortunately, these injections can cause considerable post-injection pain, about which little can be done outside of opiate pain medicine, which I cannot recommend due to their high addiction potential. Anti-inflammatory pain relievers, such as acetaminophen and Ibuprofen are not recommended, as they work to counteract the inflammatory effect of Nolotil. Nolotil’s peak effect will last for roughly 72 hours, after which it will begin to diminish. Nolotil is not designed for regular use and if abused in this fashion, muscular damage can result. Its use should be limited to show time and/or special functions/activities the individual deems important.

On a side note, the medical community, upon recognizing the value of the drug’s swelling function, has often used it in infant/child organ surgery. Just like with muscles, Nolotil will also swell vital organs, allowing surgeons to perform delicate procedures, such as heart surgery, much more easily.

Like all drugs, there are potential side effects. While prostaglandins are considered a relatively mild class of drugs overall, Nolotil, although rare, has resulted in the following side effects: Angranulocytosis (a reduction white blood cells and acute fever), shock, kidney failure, various blood disorders, and death. This has caused some countries, including the U.S. and Canada, to withdraw the drug from market, although some other countries continue to use it with success.

Nolotil occupies a rather unique place in BB’ing pharmacology. Technically not a PED (it does nothing to increase performance), no other drug is able to cause such a rapid increase in muscle size. As others have stated, Nolotil is often a miracle drug for those BB’rs who struggle with proportion issues originating in the upper-arms, lower-legs, delts, and traps. In many cases weak points can be completely eliminated within a matter of hours. I will close with a word to the wise. If you have not used Nolotil before, immediately before a competition is not the right time to begin experimentation. As with anything new, you will want to evaluate the drug’s effects on your physique long before you step onstage, so if any mistakes or negative reactions occur, you do not ruin months of hard work.