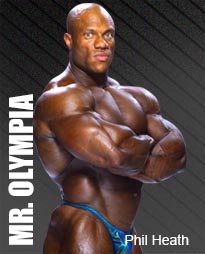 After every big IFBB contest I like to do a retrospect on the entire event that was. This year Mr. Olympia had me hoping for something special, but in many ways it was simply business as usual. Men’s open featured the emergence of Big Ramy, Jay’s return, and a rematch from last year’s final two in Phil and Kai. In the 212 division Flex Lewis predictably returned to win his second championship. On the women’s side of the sport we saw industry staples Iris Kyle, Adela Garcia, Nicole Wilkins, and a trio of relative unknowns shoot up the placing’s in bikini. And the rising star of the IFBB, Dana Linn Bailey, who has captivated the eyes of fans for the past couple of years, won the sports inaugural WPD Olympia championship. Safe to say we didn’t see many upsets, but how right were the final results when the weekend came to close? Here’s my take on all the action.

In men’s open bodybuilding Phil Heath came-in “on” once again in Friday night’s prejudging and slammed the door on the chances of anyone beating him for his third consecutive title on Saturday.

As it stands, not only will somebody like Kai, Dennis, Rhoden, or Ramy need to come in at their all-time best, but Phil will need to come in slightly off for the door to be opened at any chance of an upset. He’s just too consistent with his conditioning, muscle pop and full muscle bellies, and polished presentation to entertain a contender that isn’t hitting personal bests. Kai Greene may have won the crowd, but he didn’t have enough gas in his tank to nudge out Phil. After all, Phil Heath is The Gift – and he deserved this win.

The 212 bodybuilding division was something similar to that of the open. Flex Lewis in 1st and David Henry in 2nd was a final pairing that everyone in the industry can agree to. Some might argue that Jose Raymond could slide into the second position, but the argument isn’t a slam dunk. Flex has very special genetics that will likely go unchallenged, and much like Heath, he’ll need to come in off and somebody else will need to come in lights out to even have a conversation about an upset. Kevin English in 3rd place has me and just about everyone in the industry scratching their heads. At least he didn’t come away with a victory like some expected.

Moving onto the women’s side of the Ms. Olympia competition; I have very different impressions than the Men’s classes. The bikini division saw relative no-name women place in the top 3 in Ashley Kaltwasser, Yeshaira Robles, and Stacey Alexander. The heavy favorites, Nathalia Melo, India Paulino, and Amanda Latona placed in 4th, 5th, and 6th respectively. I would say that these placing’s were all out of whack, but to be honest – who cares? All six are super-hot and perfect 10’s. Whining about who should have come in what order is pretty lame. All of the ladies in this division won the genetic lottery and should go to bed with a “perma-smile” every night.

Fitness is a division that really has me on tilt. Everyone watching at home and in attendance at The Orleans Arena saw Oksana Grishina beating out Adela Garcia for her first Ms. Olympia title. To the disappointment of most of the 10,000 fans in attendance Garcia pulled out her 8th title over Oksana and Arnold Classic champ Tanji Johnson. If I have one knock against Grishina it is that she has used the same routine at the Arnold Classic and Olympia in at least the past two years. As the sports’ most artistic athletes I would like to see more from her. She set the bar unbelievably high and now has to live up to it. As for Adela, I have no idea why she’s getting these wins. She’s tired, aging, and her routine is a throwback to the 90’s Gloria Estefan Miami Sound Machine, “Conga,” hit single.

In figure, Nicole Wilkins stormed back after a few recent disappointing final placing’s to capture the win over fierce competitors Erin Stern, Candice Keene, and Heather Dees. Wilkins came in looking much harder than we have ever seen her before. Judges love to see change and Nicole delivered. People were knocking that she may have lost her girl next door beauty in favor of a more muscular physique, but the changes clearly paid off as she seemingly ran away with the trophy. For me it was great to see her give the judges and fans something new. I was starting to get worried that she was becoming irrelevant, but her and coach Hany Rambod tried out a new formula and it paid off in spades. Love this outcome for Nicole.

And in the new Women’s Physique Division uber superstar Dana Linn Bailey crushed her competition at the first ever WPD Olympia. The IFBB decided to go with a smaller and more marketable physique in DLB who has one of the biggest fan bases in the sport just shy of Phil Heath and Jay Cutler. Not only was this the right move from a physique standpoint, it was the right move from a public relations and marketing perspective. DLB is the kind of athlete who can globalize the sport. She’s the punk rock Cory Everson; Tough luck for heavy favorites Karina Nacimento and Juliana Malacarne.

Overall I thought the judging panel hit a homerun and cemented some positive forces in Heath, Lewis, Wilkins, and Dana Linn Bailey as bonafide ambassadors of the sport and of the IFBB.

Newer Post
Animal study: weight loss a cinch with apple pulp
Older Post
The anti-catabolic effect of a couple of grams of L-carnitine