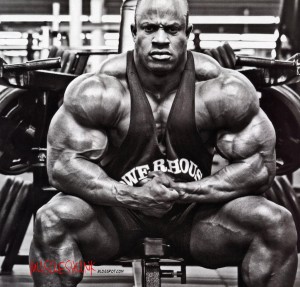 This month I decided to take a break from the typical PED laden monologue which characterizes the majority of my writings and revert back to the basics. In our search for ever-increasing knowledge, any of us can find ourselves beginning to neglect the fundamentals in favor of the details. It’s the nature of the beast, but as with all things in life, a periodic re-evaluation of our priorities can help ensure we stay on the right track. The basics are the basics for a reason…because they form the foundation on which everything else stands, without which we simply end up spinning our wheels. For those of you who are well-versed on this thing called BB’ing, you will find this to be more of a re-fresher course, but for those who are still new to this game, pay attention, as your ability to implement and adhere to the following guidelines will mean the difference between getting big and staying small.

This is one of the most frequently encountered mistakes among those who take up the iron game and is the #1 reason why so many BB’rs never come anywhere close to maximizing their muscular development. Getting big requires a constant surplus of calories–day in and day out, for years on end. You could eat all the protein in the world, train your ass off in the gym, sleep 9-10 hours a night, and even take the most powerful performance enhancing drugs available, but if you are not consistently eating an above maintenance amount of calories, your progress will be poor to non-existent. This is a tough grind that few people are cut out for…and one which grows progressively more difficult as additional muscle tissue is accumulated.
If you are serious about your BB’ing efforts, taking in the proper amount of calories should not be left to guesswork. Counting calories is essential, especially as a beginner, as feelings of fullness are not always an adequate indicator of caloric sufficiency. As a general rule, you want to consume between 250-500 calories above maintenance (for a natural BB’r) and 500-1,000 calories above maintenance (for a drug-user) during a mass building phase.

While all macronutrients are important, protein is absolutely essential not only for muscle growth, but also for the preservation of life. It is responsible for the maintenance of all living tissue and is directly involved in a multitude of bodily functions. More precisely, it is the amino acids within protein that the body uses to accomplish these metabolic processes. While the body requires a certain amount of protein in order to maintain its current level of muscle mass, protein requirements increase during times of muscle building. Conventional wisdom suggests that a BB’r actively trying to maximize muscle growth should consume anywhere between 1-2 grams of protein per pound of bodyweight. This number has proven successful by BB’rs world-wide for the last 50 years.

With much of the general population seeing “carbs as the enemy”, so to speak, some may be attempted to minimize the inclusion of this macronutrient in their diet. This is a mistake, as carbohydrates play a critical role in the muscle-building process. While the amount of carbohydrate which is optimal can vary substantially from one person to the next depending on metabolism and caloric need, even those with limited requirements will need to make this macro a substantial part of their daily diet.
Carbohydrates are the muscle’s preferred energy source during weight training. When carbohydrates are ingested, they are converted into glucose and delivered into the bloodstream, where it can then be used by the muscles for energy. Depending on the amount of glucose is present, a portion is transported into muscle tissue where it is stored in the form of glycogen. This stored carbohydrate is beneficial in itself, as it promotes a hydrating effect which enhances the anabolic response, while simultaneously leading to an increase in muscle fullness.

Carbohydrates consumption also leads to the release of insulin; a pancreatic hormone which displays a wide variety of anabolic effects in the body. Insulin increases nutrient shuttling to muscle cells, inhibits protein synthesis, and increases IGF-1 bioavailability, among others. The take home message is that carbohydrates are a necessary part of any BB’ing diet, without which one will severely compromise their ability to add muscle tissue.

When in a mass-building phase, the general recommendation is to consume between 2-3 grams of carbohydrates per pound of bodyweight, although this number may increase or decrease for those with an abnormally fast/slow metabolic rate.

“Normal” people eat maybe 2-3X per day with an occasional snack here and there, but as BB’rs our nutritional needs differ from that of the general public. We must eat at regular intervals if we want to avoid catabolism (muscle wasting) and maintain an anabolic (muscle building) state. When protein is not ingested for an extended period of time, blood levels of aminos acids begin to wane and eventually become depleted. During this time, should the body require aminos acids to perform any one of its numerous physiological functions, the first place they will be pulled from is muscle tissue, as the body senses extra muscle mass as a metabolic liability. Therefore, in order to avoid this dilemma, the majority, if not all of our meals should contain some type of complete protein, in order to keep blood levels of aminos acids elevated and the body in a positive nitrogen balance.

As a general rule, most off-season BB’rs consume between 5-7 meals per day, which often come from a combination of whole-food and protein/weight gainer shakes. Spacing these meals out, so that the BB’rs eats every 3-4 hours, is the norm.

This is closely related to #3, as one of the first things most people do when trying to lose bodyfat, in addition to eating less overall calories, is decrease carbohydrate intake. I confess, being able to get huge and ripped at the same time sounds like a wonderful proposition, but this idea is based more on fantasy than reality. Fat loss and muscle growth are contradictory goals. By trying to achieve them both at the same time, you will end up compromising your results in both areas and in many cases, making little to no progress at all.

As explained above, building muscle tissue requires that we supply the body with a surplus of calories, while losing bodyfat requires that we deprive the body of calories by following a below maintenance calorie diet, which prompts the body to draw from fat stores in order to meet its energy demands. I cannot tell you how many people I have encountered, even those with a substantial amount of training experience behind them, who refuse to accept this simple truth.

Part of the problem is the deceptive message being sent out by some supplement companies, which advertise their product by displaying various before & after photos of BB’rs who have apparently accomplished both goals at once. Anyone who has picked up a BB’ing magazine is familiar with these ads, which read something like…“Mr. John Doe added 15 lbs of muscle tissue in just 8 weeks while simultaneously slashing 27 lbs of unsightly bodyfat to transform his average physique into one respected by his peers and adored by the opposite sex”. What they fail to tell you is that the individuals displayed in the before pictures had already gotten into this kind of shape previously in their life and were “re-gaining.

Rapid improvements of this nature are only possible when muscle memory is at work. Muscle memory is a phenomenon which allows an individual to regain previously built muscle tissue at several times the rate they originally built it. Although still difficult, it is possible to lose a significant amount of bodyfat while re-gaining lost muscle tissue, simply because re-building lost muscle tissue is so much easier. Another thing you’re not told is that most of these models are using some type of performance enhancing drugs, which makes the entire process infinitely easier.

If you are someone who has never been big or ripped and wants to look like your onstage BB’ing heroes, you will never get anywhere close trying to achieve both goals at once, regardless of how many or what type of PEDs you use. Drugs may help with this initially, but progress will soon slow and then stop altogether. None of today’s pros went about building their physiques in this manner. In order to showcase the physique you see onstage, they spent several years focusing on the build-up of muscle mass. Only after this muscle had been built were they able to diet down and reveal the fruits of their.

Your program should be dictated by your goals, with one goal being prioritized at a time. If building muscle is most important to you, then focus on that. If it is fat loss, then do the same. There is no set period of time you need to spend trying to achieve each goal. Some people will focus solely on muscle growth for years, while others with larger amounts of bodyfat may want to spend some time losing bodyfat first. The amount of time you spend trying to achieve each goal, and the order you do it in, is purely up to you. There is no right or wrong way, BUT…if you try to build BB’r-like muscle size, while simultaneously stripping your bodyfat down to 5%, you are going to fail. Prioritize your goals, focus on one at a time, and you will achieve your ultimate goal much more quickly.

6.) A lack of consistency

This is a big one for a lot of guys and has the potential to drastically undermine your efforts in every area of the BB’ing experience. I cannot stress the importance of consistency enough. If you have pro aspirations, then this is a lesson you need to learn sooner rather than later…and even if you don’t, consistency is the deciding factor in your rate of progress. Quite frankly, you cannot regularly miss workouts and meals if you want to make maximum progress. The more severe your consistency issues are, especially if they involve training or diet, the more your progress will be negatively affected.
When it comes to muscle growth, it doesn’t take much to stop your gains completely. For example, if you require 3,800 calories/day to build muscle tissue and you only eat 2,600 calories a couple days per week, that could be enough to completely un-do any progress you may have made that week. That is a harsh price to pay from just 2 days of under-eating, but it is reality. Even subtle deviations from your plan, if regular, have the potential to severely compromise your gains.
Those who are the most consistent in their diet, training, and rest will yield the best results. For many, the mental-emotional strain of sticking to the plan long-term is just too much to endure, which is why so few people ever progress beyond a certain point. If you are one of those rare individuals who possesses the constitution necessary to stick with it over the long-haul, you may very well one day find yourself stepping on an IFBB stage.

Part 2 ~ with the last 6 most common Roadblocks to Muscle Growth, coming soon.