What’s the difference between dietary supplements, nutraceuticals and functional foods? 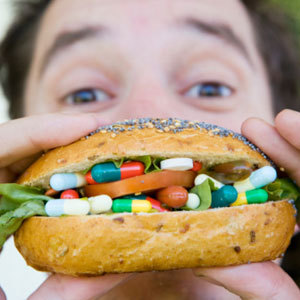 Dietary supplements are often confused with, or use synonymously with nutraceutials and/or functional foods. Here we get the terms right. The common denominator for dietary supplements, nutraceuticals and functional foods is that they all are products designed to supplement the human diet by increasing the intake of bioactive agents that are thought to enhance health and fitness 1. Other than that, each term describes a different product category. Before we go any further, it should be noted that these terms vary in meaning from country to country, as does the regulation of these agents 2-24.

The term “nutraceutical” was first coined 1991 by the by the Foundation for Innovation in Medicine 23. Since then, its definition has been modified. In 1999 a new working definition for nutraceuticals was proposed: Nutraceuticals are a type of dietary supplements that deliver a concentrated form of a biologically active component from a food, presented in a non-food matrix, to enhance health in dosages that exceed those that could be obtained from regular food 1. Some other definitions of nutraceuticals are “products that contain substances that are a natural component of foods, or other ingestible forms, that have been determined to be beneficial to the human body in preventing or treating one or more diseases, or improving physiological performance” 26, or “products isolated or purified from foods that is generally sold in medicinal forms not usually associated with food. A nutraceutical is demonstrated to have a physiological benefit or provide protection against chronic diseases” 27. The US Food and Drug Administration (FDA) does not recognize the term nutraceutical 1.

In regards to functional foods, all foods can be said to be “functional” in the sense that they provide us with essential nutrients, taste and aroma. However, foods are now being examined intensively for added physiologic benefits, which may reduce chronic disease risk or otherwise promote health 8, 13, 20-22, 24, 26, 28-32. These research efforts spurred the development of the growing food category now recognized as “functional foods”.

The concept of functional foods was first developed in Japan in the 1980s when, faced with escalating health care costs, the Ministry of Health and Welfare initiated a regulatory system to approve certain foods with documented health benefits in hopes of improving the health of the nation’s aging population 33. These foods are in Japan recognized as Foods for Specified Health Use (FOSHU) 15, 16, 34.

In the United States, functional foods have no such regulatory identity. However, several organizations have proposed definitions for this new food category. In 1994, the National Academy of Sciences’ Food and Nutrition Board defined functional foods as “any modified food or food ingredient that may provide a health benefit beyond the traditional nutrients it contains” 37. The International Life Sciences Institute defines functional foods as “foods that, by virtue of the presence of physiologically-active components, provide a health benefit beyond basic nutrition” 38. In a 1999 position paper, the American Dietetic Association defined functional foods as foods that are “whole, fortified, enriched, or enhanced,” but more importantly, states that such foods must be consumed as “… part of a varied diet on a regular basis, at effective levels” for consumers to reap their potential health benefits 39.

You might also have heard the catchy terms “designer food”, “pharmafood” and “phytoceutical”…these names have met with varying degrees of acceptance, and are not used any more in scientific circles 40. Functional food products target healthy people and people in a preliminary stage of a disease or a borderline condition 24, 34. When the products are manufactured or distributed, approval from the government is required after rigorous evaluation of the safety and effectiveness of proposed specified health effects 24, 34. In contrast to functional foods, another category of foods called “medical foods” are classified for use in specific disease states and require a physician’s recommendation and continuous monitoring 2.

To recap, below is a summary list of the definitions for dietary supplements, nutraceuticals and functional foods:

Nutraceuticals are a type of dietary supplements that deliver a concentrated form of a biologically active component from a food, presented in a non-food matrix, to enhance health in dosages that exceed those that could be obtained from regular food 1.

A nutraceuticals is a product isolated or purified from foods that is generally sold in medicinal forms not usually associated with food. A nutraceutical is demonstrated to have a physiological benefit or provide protection against chronic diseases” 27.

Functional foods as “foods that, by virtue of the presence of physiologically active components, provide a health benefit beyond basic nutrition” 38.

Functional foods are food products that in scientific studies have been demonstrated to beneficially affect beneficially one or more target functions in the body, beyond adequate nutritional effects, in a way which is relevant to either the state of well-being and health or the reduction of the risk of a disease”36.

37. Thomas PR, Earl R. Opportunities in the Nutrition and Food Sciences: Research Challenges and the Next Generation of Investigators: National Academy Press; 1994.