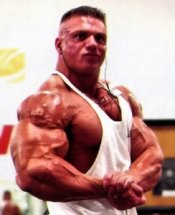 The most interesting health and fitness related natural compound to come around within the last decade or so has got to be ursolic acid. I have been aware of its benefits for quite some time but it wasn’t until last year that I really became excited. It was then that a landmark study was released by some University of Iowa researchers showing that ursolic acid blocked the muscle wasting effects of nerve injury and starvation, as well as increased muscle mass in healthy animals while simultaneously reducing body fat stores.

It’s been over a year since then and another study on ursolic acid has been released by these same researchers http://www.ncbi.nlm.nih.gov/pmc/articles/PMC3379974/. The data confirm some of the original findings as well as shed more light on how ursolic acid works in the body to build muscle and burn fat. In contrast to the first study, where normal mice were used, this study used mice fed a high fat diet. This mouse model is used to induce obesity. Since obesity is an enormous health concern in our society, any drug or natural substance that can help treat the causes or effects of obesity would be of tremendous value. In other words, researchers aren’t so interested in developing stuff for athletes and healthy people because that’s not where the bucks are at. Still, studies that utilize the mouse obesity model can be of interest and have applicability to non-obese active folks as well.

Ursolic acid increased the size of both slow and fast twitch muscle fibers. This was associated with increased Akt signalling (Akt has vital roles in biological processes such as protein synthesis and glucose uptake and metabolism). These rats had greater grip strength than control rats and could run significantly farther on a treadmill. They had slightly lower resting heart rate than controls while demonstrating no differences in blood pressure. Another interesting find is that a substance called vascular endothelial growth factor – A was substantially more active in the ursolic mice, indicating that new blood vessels were being formed to feed the growing muscle tissue.

There are two types of body fat – brown fat and white fat. White fat is more or less metabolically inactive, and its purpose is mostly to store calories. Brown fat on the other hand is full of an enzyme called UCP-1 which stimulates thermogenesis (this is the same enzyme turned on by DNP). Brown fat is rich in blood supply and essentially burns calories and keeps you warm. The researchers found that the ursolic supplement mice had a lot more brown fat, and not surprisingly they were much more resistant to the cold then the control rats.

The ursolic supplemented mice had higher levels of energy expenditure. Even though they ate more food than the control mice, the ursolic mice weighed less – with the difference in weight made up in body fat. This was not an acute effect however and was only seen after chronic administration of ursolic acid. This is entirely consistent with the fact that it required time for the growth of muscle and brown fat to burn the extra calories, and was not due to some immediate stimulant effect.

This latest study just adds to the impressive evidence behind the amazing bodybuilding and overall health potential of ursolic acid. Ursolic acid as a supplement has become more and more popular over the last year or so since the evidence first started pouring in on the stuff. It is usually sold in the form of an extract from herbs such as rosemary or loquat leaf. This form has proven to be less than stellar however in the feedback users have been giving. Results have been hit or miss for the most part.

I noticed this high variability in results and less than anticipated feedback early on, and I was quite certain it was due to the terrible solubility of the compound. It basically repels water and is very insoluble in the sort of solvent systems that are similar to the properties of the lining of your gastrointestinal system. If you couple that with the likelihood it is metabolized extensively upon liver first pass, you end up with very poor bioavailabilty. In fact, research suggests that less than one percent of orally ingested ursolic acid actually gets into your system.

I solved this problem however. For the past several months I have synthesized and played with derivatives of ursolic acid that have solubility and dispersability properties magnitudes better than straight ursolic acid. I have found that delivering these derivatives (which simple break down quickly in the body to ursolic acid after being absorbed) via a topical formulation leads to the sort of body fat loss and muscle mass increases in human subjects that we would expect to see from the published mice studies.

The compound I have settled on as the best has absolutely amazing solubility compared to straight ursolic acid. It is called Arginine Ursolic Acetate and this is its chemical structure.

In the body this compound breaks down rapidly to acetic acid (a dietary fatty acid), l-arginine (a dietary amino acid), and ursolic acid. Although I have never (yet) measured blood levels of ursolic acid to prove that this method delivers the compound way better than regular extract capsules, the fact that almost everyone that has tried when formulated topically gets amazing results sort of speaks for itself.

So there you go. If you weren’t excited about ursolic acid before then you should be now. And if you want to try the patent pending form that I worked my butt off to perfect then you can by clicking here: http://www.prototypenutrition.com/ProductDetails.asp?ProductCode=UR