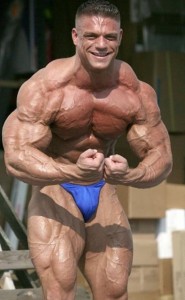 Are you one of those old school gym rats who believe heavy and low 6-10 rep resistance training the best stimulus for muscle growth? If so, you’re not alone. Many of us (yours truly included, so I’m not pointing any fingers) believe that the best stimulus for muscle growth is heavy lifting in the 6-10 rep range. However, recent scientific findings show that the classical heavy and low 6-10 rep training might not be the best way to induce muscle anabolism…

The classic weight lifting recommendation for building muscle is to lift relatively heavy (over 70% of 1RM), or within the 6-10 rep range (1, 2). However, a recent study has shown that a training mode with lower weight and higher reps actually is more effective at inducing muscle anabolism and muscle growth (3).

This study had subjects perform 4 sets of leg extension at different loads and volumes (reps):

What does this mean?

This finding counters previous recommendations that heavy loads (i.e., high intensity) are necessary to maximally stimulate muscle protein synthesis (1, 2, 4, 5). It is now apparent that the extent of muscle protein synthesis after resistance exercise is not entirely load dependent, but is also related to exercise volume (that is, number of reps in this case). Thus, the total volume of contractions (number of reps), independent of load (intensity) apparently results in full motor unit activation and muscle fibre recruitment

Now, probably you’re thinking “am I supposed to start lifting like a chick” to build muscle? I want to point out that this study only investigated the effect of one bout of resistance exercise, comprising four sets) on muscle (myofibrillar) protein synthesis. In order to get a definite answer, long-term training studies need to be conducted. According to a personal communication with the head researcher (6), one such training study has been done and is now awaiting publication. With the reply “we are very confident in the short-term data”, at least I will start to throw in some high rep sets here and there in my training program. But in order for this to work, you have to train until complete failure. No sissies!

Muscle growth with high rep training – has time come to challenge our egos?

The subjects in this study were healthy young men (21 years old, 5ft 7in tall, 162 lb), who were recreationally active with no formal weight-lifting experience or regular weight-lifting activity over the last year.

The training program consisted of unilateral knee extension training performed 3 times per week for 10 weeks. Each leg was randomly assigned to one of three workouts:

After 10 weeks of training, the quadriceps muscle volume (indicating muscle growth) increased significantly in all groups. The increase in the 30%-3 and 80%-3 condition was similar, and about twice as large as the increase seen in the 80%-1 condition.