1. How did I get started in the promotion of the Olympia after parties?
Shortly after relocating from Venice Beach CA to Las Vegas, NV, I was asked to be a celebrity host for the 2001 USA Championships after party help at “Polo Towers”, just off the Vegas strip. My wife at the time Kelly Ryan and I both accepted the offer to have our images used on all the after party promotional material as well as host the actual party and participate in the festivities.

In other words, we were being paid, and paid very well I might add, to attend a function we would otherwise be present at. Fact is, I was never one to turn down a good party and getting paid for it was clearly a bonus. The truth be told, the after party turned out to be a huge success with over 1,500 people from the bodybuilding and fitness industry attending. I then realized the after party production business could be extremely lucrative and a welcome addition to our annual salaries. The next party took place the following year at “Club Eytopia”… and it was Epic! This time I was much more then a host, I was now factored into a percentage of the net income. The fact that I became more involved with producing the party and not just promoting it, opened my eyes to a number of things, good and bad. Bad in the fact I found out first hand you can’t trust people you don’t know involved in the party business. It was a rude awakening to see employees in charge of handling the crowd and checking ID’s taking more then twice the cover charge from partners standing in line and pocketing the money. Obviously the bad money was being skimmed out of my profits, but good because it was the decided factor that motivated me to start Emperor Entertainment and produce the official after parties for the N.P.C. and I.F.B.B. From that point on my company produced the parties, I was CEO, no partners to concern myself with and I controlled every aspect of my events. Emperor Entertainment threw parties all over the USA. I produced after parties following the Mr. Olympia at the “House of Blues”, following the Arnold Classic at the “Promo West Pavilion” and eight parties in Las Vegas alone. I have to admit, Emperor Entertainment became leaps and bounds more successful then I ever imagined. The three years after the first event my parties were something fans, athletes and sponsors would really look forward to. I pre-sold tickets online moths in advance and sponsors were always ready to jump on board for extra promotion. Most importantly, I never forgot where I came from and always remembered how badly I struggled before turning pro. That’s precisely why I always employed several bodybuilding and fitness athletes to celebrity host the parties, Emperor Entertainment became the official Olympia after party producing company.

2. I always heard about people doing crazy stuff at your parties…Drugs, sex, crazy shit. Can you paint a picture of some of your craziest parties and what happened there?

Ya know, I heard countless stories in regard to people going wild at my parties. Some of the stories are true; some of them are totally false, but mostly just gross exaggerations of the truth. And honestly the crazy stuff that went on wasn’t any crazier then a typical night out clubbing in Vegas or NY or any other big city in the world. Crazy stuff going on is what I saw first hand in Amsterdam…that’s crazy shit. I’ll save Amsterdam for another column all together. The fact is people in the bodybuilding and fitness community enjoy a good party. And people directly involved in this industry are sexual beings. When you put highly sexual beings at a good party, with good music and recreational drug use… crazy stuff happens. Now myself, I don’t call it crazy, I call it big time fun! With that being said, one of the craziest parties that really stands out in my mind was the 2003 Arnold Classic after party at the “Promowest Pavilions”. The pavilion was a concert hall that I converted into a night club by renting tables, couches and chairs. The conversion was excellent because I managed the seating areas in such that I created many different VIP areas specifically for the party sponsors. Sponsors paying the most money had the luxury of their areas being located in the most remote section of the party, far upstairs in the corners. I write that because anyone reading this who is attending the after party will know first hand… it’s the truth. Now like any night club I’ve ever been to, most of the people were drinking or had taken ecstasy, and everyone I talked to was on some type recreational drug. There was a huge conference room upstairs with a 12 seat meeting table and a few captain’s chairs that I used as my private retreat to go over numbers as the party progressed throughout the evening. Let’s just say the room became much more then a conference room as the night went on. The boys from Biochem used the room on several occasions. At one point in the evening four gentlemen who worked for Biochem and one girl entered the “conference room” using the retreat for quiet sometime. I can’t say for sure what exactly happened, but I’m pretty sure I have a good idea, and so do you. Funny thing is, I saw the same girl working the Biochem booth at several other events. At one point in the evening I witnessed two very well known fitness athletes (at the time) performing oral sex on each other in the captain’s chair, it was spectacular to say at least. I guess you could say the fitness girls got a little crazy, or the boys from Biochem got a little nuts, but honestly that was the norm for the bodybuilding and fitness after parties…I just happened to produce them. What made this particular party a little crazier then the others was the conference room. So many people used the retreat that evening. Other venues didn’t have a private room at my disposal, this space made it extremely easy for people to sneak odd and get their grove on. What I found crazy, is how many people, both men and woman snuck off to the room without their spouses of girlfriend or boyfriend… now that was crazy! Pro bodybuilders, pro fitness athletes and company owners all used the room that night and you know who you are… Dorian. 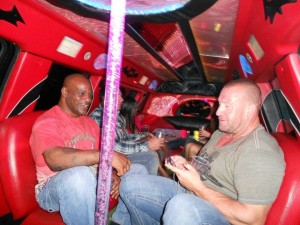