What do you think about Nasser? Can you tell us a story about him?

Nasser…Well I know he definitely should’ve won the Olympia at least once. I can’t pin point the date but I do know it was absolutely clear he was much better then Dorian Yates that year. Dorian had torn his bicep leading up to the show and was slightly odd as a result. Nasser was full, hard and unusually muscular making one of those contests where the clear cut winner was apparent. Sadly, as everyone knows all too well, being the best athlete doesn’t mean you’ll necessarily win in the I.F.B.B. or N.P.C. for that matter.

I personally witnessed King Kamali totally dominate the Australian Grand Prix, but end up taking second to Marcus Ruhl… that’s a entirely different story. Anyway, I don’t think Nasser fully recovered mentally after that contest. It’s slowly but surely destroyed his physique using Synthol in his biceps over the next few years following that Olympia. It was almost hard to watch the transformation Nasser went through going from greatness to not placing in the top 5 over a short period of time. You almost thought to yourself, why in the hell isn’t any of his friends of family members telling him not to use Synthol. He destroyed his physique with that shit!! I know for whatever reason he didn’t care for me, nor did he have anything nice to say about me. 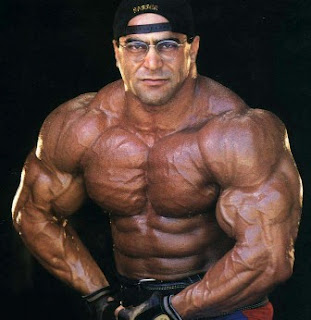 He never once attended any of my after parties because he thought the parties were beneath him, as he voiced his opinion on many occasions. Back in the 90’s I attended a clothing convention in Reno NV representing “Buy American” clothing line. Nasser and Chris Cormier were both appearing for the same company working at the same booth. Chris hung a fairly large banner at the booth with his name in big bold letters for fans to see. Later during the day, Chris left the booth for a food break and Nasser took the opportunity to rip Cormier’s banner down and hang his own. From that day on I never cared for Nasser and always thought he was a asshole! Me, I would’ve smacked the taste out of his mouth, but that’s just me. I can’t remember what happened when Chris came back, but I do know Nasser didn’t appreciate me telling Chris what happened to his banner… maybe that’s why Nasser spoke badly of me behind my back. I’m not sure what ever happened to Nasser. He slowly fell off the competitive scene in the early 2000’s but if my suspicions are correct, Synthol destroyed his career. Nasser always carried a video camera with him anytime I saw him at bodybuilding and fitness events. He was constantly recording footage like a tourist directing fans and other I.F.B.B. Pros which I always found to be quiet annoying. I thought to myself, “Idiot, fans are here to see you”.

Can you tell the story of when you punched Melvin Anthony in the face at gold’s Gym Venice Beach?

Let me start by saying this is a incident that I regretted just moments after it occurred. Throughout my career Melvin and I have always been friends, we weren’t extremely close but we were friends never the less. I had a great deal of respect for Melvin because of his excellent work ethic and the fact that he was arguably one of the greatest bodybuilders of my era. About a year before the altercation, Melvin was dating a local fitness athlete who for lack of a better word was unloyal. She approached me on the treadmills in Venice Gold’s on day complaining about Melvin and how sick she was of the way he treated her. I suggested that maybe she should talk to Melvin and let him know how she felt. I let her know how preparing for professional bodybuilding shows were difficult to prepare for and caused athletes to be moody and down right mean sometimes. She went on to say she was preparing for her own fitness competition and asked me if Kelly (my wife at the time) and I would consult her on the diet and nutrition aspect of her prep. That’s it, that’s all she asked and nothing else was spoken of nor implied. I say this because almost a year later while Melvin and his girlfriend were in a heated argument, her request for a diet consultation suddenly turned into a ridiculous story of me asking her to have a threesome at my house. Now it’s ridiculous because it was Melvin’s girlfriend and I wouldn’t hit on his girl due to my respect for Melvin, period. Don’t get me wrong, I hooked up with more girlfriends and wifes of bodybuilders then I can remember, but Melvin’s girlfriend wasn’t an option in my book. 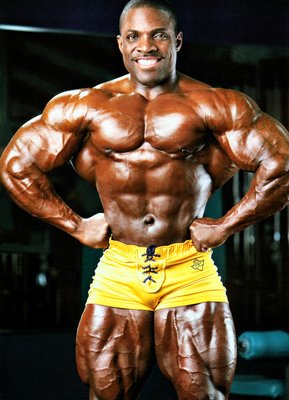 I think because of my reputation it was easy for Melvin to believe I did proposition his girl…and that was not a good thing to anger a “Silver Back Gorilla”. So I’m in Gold’s Gym and it’s just another typical day of training. I remember it like it was yesterday and in fact I was using the standing calf machine located just 10 feet from the front desk. Just as I finished a set, I see Melvin coming thru the front desk, all 290 lbs. of him and mad as hell. You could see from the look on his face and the way he walked, he was angry, spitting mad but I certainly had no idea his anger was directed at me. Melvin came directly to me, taking position in front of the machine I was using, and started to let me know exactly what was on his mind. He informed me his girlfriend told him I tried to hook up with her. I of course denied the accusation and made a attempt to let him know that story was simply not true and to lower his voice and not talk to me like I was a punk. Of course the conversation was heated and some foul language was being used. Truth is, the split second I felt threatened I threw a right hook catching Melvin on the forehead. It was one of those situations where I simple did not want to get hit first, for obvious reasons. After Melvin went down the fight was broken up immediately. The actor Andy Byrnowski ran over and pulled me away from Melvin. That was it and I felt terrible, for real, really bad. As soon as the tension cleared and both of us were cooled down, I walked outside to Melvin’s car and apologized, I think later on in life he believed me and knew his girlfriend was lying. Consequently they broke up and several stories surfaced of her cheating on him with Chris Cormier and others which made it much easier for him to believe me. To make matters worse, a few months after the altercation, “Musclemag International” published a cartoon drawing of me knocking Melvin out in a boxing ring. Man, it was so out of line, it wasn’t even funny and made our relationship a little uncomfortable for quiet a time. I can remember Dexter Jackson making a smart ass remark to me, while attending the USA Championships in regard to me hitting Melvin. I thought to myself, here we go again with another bodybuilder tuff guy about to bite off more than he can chew running his mouth to me. Can’t remember what I said but I know he kept walking and we went back to work on our Nutrition Companies booths. I’ve said this to Melvin before, and I’ll say it again, my bad bro.