The Effects of Testosterone on the Body 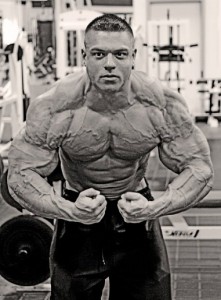 The effects of Testosterone

One of the most common question I’m asked is “what should I do for a first cycle?” The questions are; “what steroid should I take?” “How long should I take it?” and “What will the effects be?” There are literally dozens of steroids available and that makes it difficult for a first time user to choose. The following information will attempt to provide enough information for a first time user to make an educated decision about anabolic androgenic steroid use.

Testosterone is one of the most effective, safe and available steroids today, therefore I believe Testosterone is the best first cycle choice. The following text outlines the benefits and risks of Testosterone administration based on a clinical human trial of 61 healthy men in 2001. The purpose of the trial was to determine the dose dependency of testosterone’s effects on fat-free mass and muscle performance. In this trial 61 men, 18-35years old were randomized into 5 groups receiving weekly injections of 25, 50, 125, 300, 600 mg of Testosterone Enanthate for 20 weeks. They had previous weight-lifting experience and normal T levels. Their nutritional intake was standardized and they did not undertake any strength training during the trial. The only two groups that reported significant muscle building benefits were the 300 and 600 mg groups so any dose lower than 300mg will not be considered in this essay. 12 men participated in the 300 mg group and 13 men in the 600 mg group. 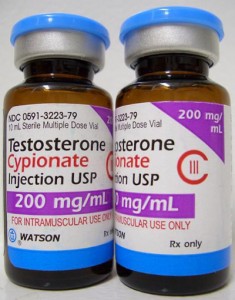 Body composition was measured after 20 weeks.

There were no significant changes in PSA or liver enzymes at any dose up to 600mg. However, long-term effects of androgen administration on the prostate, cardiovascular risk, and behavior are unknown. The study demonstrated that there is a dose dependent relationship with testosterone administration. In other words the more testosterone administered the greater the muscle building effects and potential for side effects.

Given the results of the study and based on years of personal experience I believe the first time user can safely use between 300-600 mg of testosterone enanthate or cypionate per week for 8-12 weeks. Because it is desirable to have even blood androgen levels I advise at least 2 equal injections per week. The following graph demonstrates that testosterone cypionate peaks within 1-2 days after injection and falls off to almost baseline by day 10. Therefore waiting 7 days between injections of cypionate would cause wide fluctuations in blood androgen levels. 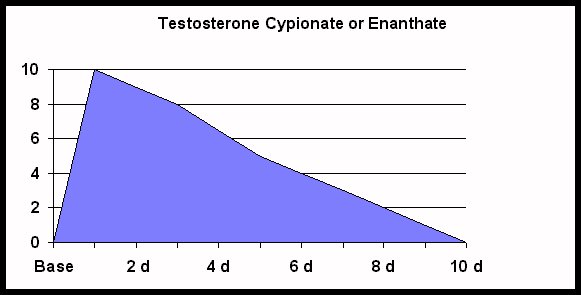 If a first time user wanted to use 600 mg of cypionate or enanthate per week he would inject 300 mg on Tuesday and another 300 mg on Saturday each week for 10 weeks. When injecting long heavy esters like cypionate with this frequency I tend to have less acne then 1 injection per week.

There are a number of esters which provide varying release times. Acetate or propionate esters extend the release time of testosterone a couple of days. In contrast, a deconate ester prolongs the release of testosterone about 3 weeks. Testosterone enanthate and cypionate are almost identical esters. The use of an ester allows for a less frequent injection schedule than using a water based testosterone like suspension which has no ester at all and is rapidly in and out of your system after injection. The published release times are not exact and are many times based on a single injection not many multiple injections which can delay the release of the hormone. Other factors affect release times of esters such as scar tissue and the muscle group injected. Only a blood test can confirm when the active hormone has cleared your system.

Esters not only effect release times but also the potency of the Testosterone as esters make up part of the steroid weight. This must be taken into account when calculating dosages. The longer the release time the less free hormone. For example propionate is about 15% more potent mg. for mg. then enanthate so 500mg of propionate would equal about 575 mg. of enanthate. The following chart illustrates the free base equivalents for several compounds.

Although it was not indicated in the trial, during or after the steroid cycle some men are prone to gynecomastia which is the formation of female like breast tissue. This is due to excessive estrogen as the body tries to balance out the sex hormones. A selective estrogen receptor modulator or S.E.R.M. such as Tamoxifen can be used effectively to combat gynecamastia in an emergency as it competes for the estrogen receptor which in turn inhibits estrogen’s effects. It is highly recommended that a S.E.R.M. be available during treatment of Testosterone. 10-40mg daily is an effective dose however dosage is dependent on how much testosterone is administered as well as the individual himself.

The decision to use steroids should not be taken lightly and should be the last consideration after implementing a solid nutritional, training and recovery plan. It is advised to get blood work when using these medications.

Ancillaries during the cycle

I briefly wrote about using Tamoxifen above for emergency gynecomastia treatment however I’m convinced that there is a better strategy for controlling estrogen during a steroid cycle. Rather than waiting for the side effects of estrogen to present an aromatase inhibitor like Arimidex or Aromasin should be used on cycle to control Estrogen and keep free testosterone levels high. 0.5mg-1mg Arimidex every other day OR 10-25mg Aromasin daily. Start with the lower dose and then see how that controls water retention, blood pressure and libido and make adjustments as needed. A blood test would be the most ideal way to determine the dosage of the AI. Free T needs to be in the high range and estradiol between 10-30 pg/ml.

Testosterone-Induced gonadotropin suppression tends to cause atrophy of the testes and decreases intratesticular testosterone. In other words, when a male administers testosterone his testes shrink because they are suppressed. A simple way to restore ITT levels and maintain the mass of the testes is to administer HCG during testosterone treatment. During a study it was determined that HCG is dose dependent and that approximately 300iu HCG taken every other day restored ITT levels. This is 1,050iu HCG weekly. I recommend 500iu twice weekly while on testosterone treatment. HCG will not only keep ITT levels and the mass of the testes normal but will also aid in keeping the male fertile.

For all you guys who want to add multiple compounds to your first course I advise against it because if you have side effects then you will not know which compound is causing the sides. I have gotten a ton of questions over the years and there is always some reason that I’m given for using multiple compounds on the first run but there really is no need. However my cycle sample above may not be for everyone so I am offering an alternative to the flat cycle design. If you want to run a first cycle with a little more horsepower then you may want to consider a modified pyramiding cycle. I have done over 20 pyramid courses and must say they are my favorite way to run aas. The human body is always fighting for homeostasis so the concept is to increase dose before gains plateau. Based on the 2009 myostatin study we can design a cycle that is effective for 10 weeks using this strategy. The following first cycle is for men that want a little more performance with added risk while only using Testosterone. The first 5 weeks a standard dose is administered to evaluate how your body responds and to determine if sides are manageable. If sides are manageable then increase the dose.

10-25 mg Aromasin daily with the goal of keeping Estradiol between 10pg/ml-30pg/ml. Only blood work can confirm if you are in this range.

I strongly believe that an AI should be used as long as there is an aromatizing compound being administered. In this case Testosterone and HCG aromatize therefore using an AI until these meds clear is what I’m recommending. Nolvadex has been shown to reduce IGF-1 and GH levels when used alone. This is not a big deal on cycle as testosterone increases IGF-1 in a dose dependent relationship. However off cycle this is may be a problem. PCT is a fragile time and lower IGF-1 and GH levels are not desirable. More advanced users may opt to use Nolvadex and Human Growth Hormone during PCT to counter the HGH lowering effect of Nolvedex. However, I’m recommending AI’s that may be used on cycle and during PCT. It’s my conclusion that Aromasin or Arimidex are both good choices.

I recommend the following PCT protocol for esters like Cypionate and Enanthate;

The HCG is administered BEFORE the aas ester clears to increase the mass of the testes and bring back ITT levels. This will allow the testes to sustain output of testosterone sooner.

Aromasin or a similar aromatase inhibitor is for testosterone recovery and it is used to keep the testosterone/estrogen balance in favor of testosterone. It is also helps to keep any additionally occurring estrogen from HCG low to none.

Cortisol is catabolic. It is the enemy of all anabolism and must be kept in check. While it is blocked when under the influence of AAS, it is free to attach to the Anabolic Receptors (AR) once the steroids leave. Due to this blockage Cortisol tends to accumulate and increase when on. A low level is desirable however since it is important for other vital functions such as control of inflammation. Balance is the key. Vitamin C keeps the exercise induced rise of Cortisol in check.

The use of Creatine has shown to increase ATP metabolism and cellular water storage among many other things. This is beneficial because it provides for heightened nutrient storage and a slight increase in anabolism as well as workout stamina.