Stomach Distension and the Modern Bodybuilder: Fact vs. Fiction – Part #1 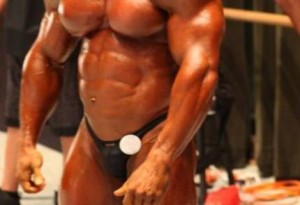 Stomach distension. What started out as an anomaly in the mid-90’s has now grown into an aesthetic epidemic affecting the large majority of professional BB’rs to one degree or another. The reasons which have been offered up for its near spontaneous appearance have been plenty, with most individuals pointing the finger at drugs, particularly GH & Insulin. While there is no doubt that PED’s share part of the blame for today’s protruding abdomens, they are certainly not the sole cause of their existence and in reality, they are not even the primary contributor. While it might be more exciting to place the blame at the feet of some exotic drug cocktail, the main cause is far more mundane and is connected directly to one of the chief pre-requisites for getting big…FOOD.

That’s right; the main reason for today’s gut expansion is due to food intake, or more precisely, the volume of food consumed. There are those in our community who love to place all the blame on drugs, yet those who do so typically fall into one of four categories. First off, we have the less developed BB’rs who are serious about getting big, but because they have never had to contend with following the type of diet required to build & maintain a pro-level amount of muscle mass, their lack of personal experience in this area leads them to accept false conclusions as fact. The second category of individuals are those who may be serious about BB’ing, but since they have little to no personal experience with these drugs (GH & insulin) and no relationship with those who do, they believe what they read online (mostly from so-called experts who have no idea what in the fuck they’re talking about). Third, we have those who sit behind a computer all day long (and look it), while spitting out scientific explanations for this condition and lastly, we have the drug-free BB’r, who after recognizing the absence of this affliction among his own ilk, naturally tends to point the finger at the only differentiating factor between his kind and the drug-using BB’r…drugs.

However, there is another category of individuals who understands all too well what it feels like to deal with a bulging midsection and the primary reason for it. This is the advanced BB’r who has built an IFBB pro or near pro-level of muscular size. This individual has watched the progression of his physique from beginner to advanced and along the way, has experienced and consistently overcome the sticking point which prevents most wanna-be BB’rs from ever achieving a impressive level of muscular development. This is the BB’ing diet. When first starting out, such a BB’r ate a near-normal amount of food; just enough of a caloric excess to foster muscle growth. However, as this BB’r grew, he became keenly aware of his increased need for more and more food if he was to continue growing. At some point the amount of food required not only to build more muscle, but to just maintain his current level of muscular size became unnatural.

It is somewhere during this phase of a BB’rs development that most individuals decide, either consciously or unconsciously, that they aren’t going to eat any more food. This is understandable because generally, at this juncture, eating has begun to lose its enjoyment and is starting to become a chore. The BB’r is no longer hungry and must now eat beyond comfort. Now, due to drastic variances in metabolism among individuals, the stage in a BB’rs development at which he will reach this point can vary greatly, but as a general rule, most BB’rs will experience this long before becoming “massive”. Most of the time, this is the test which will separate those who really want it from those who consider the basic pleasure of life more important. Those who do continue to overcome this obstacle as the years go by, which is sure to raise its ugly head multiple times over a BBr’s journey, it is these people who build what we define as a “BB’rs physique”.

By the time a BB’r reaches a competitive 240-300 lbs, he is usually eating anywhere between 4,000-6,000 (or more) calories per day of mostly clean food. For those of you who have never experienced what it is like to eat this amount of clean food day in and day out, it is difficult to understand just how difficult it can really be. It is one thing to eat this much food for a day or two…or maybe even a couple weeks, but putting the pedal to the medal at the dinner table month after month and year after year is a slow and tough grind which few are cut out for. This is why if you ask a pro BB’r what the toughest part is of building a pro-level physique, he will tell you it is the eating.

Keep in mind that for many of these BB’rs, by the time they have built a pro-level amount of mass, they are consuming double the amount of calories than they normally would’ve required in their natural (non-BB’ing) state. Making matters even more difficult is that these calories, as mentioned above, come mostly from clean sources. Not only does this make eating more mentally grueling, but it makes it more physically demanding as well, as it further increases food volume beyond the typical fatty American diet of equivalent calories.

The human body, like the rest of nature, is an organism of balance. Each person’s body was intricately woven together through their own unique DNA code, with each part of the body formed to perfectly accommodate the job for which it was created. When it comes to the digestive system, it is no different. An individual whose body would naturally grow (without weight training) into a 6’8, 300 lb specimen at 15% BF is going to develop a digestive system designed to accommodate its vast caloric needs, just as much as this same body will grow a heart, arms, legs, feet, and lungs designed to match. The man who would naturally grow to a stature of 5’7 at 165 lbs is likewise going to naturally have a digestive system designed to accommodate an amount of food designed to support a 165 pound 5’7 body.

When we look at the typical 5’9, 250 pound competition ready BB’r of today, it can be easy to forget that this man likely would’ve weighed between 150-180 off-season lbs in his pre-training state. However, unlike his muscles, his digestive tract did not grow to accommodate his now-massive body. In order to maintain his current amount of muscle mass, he will now need to eat an amount of food which is generally far beyond what he naturally would’ve required.

If you haven’t yet started to figure out how food plays a direct role in stomach distension, it will become very clear by the end of this multi-part article….and not only food, but we will cover every relevant factor involved in stomach distension today. Prior to deciding to write this piece, I thought about the literature available on the subject and I could not recall a single article which addressed stomach distension from a comprehensive and most importantly, accurate perspective. Quite honestly, there is so much bullshit out there on this subject and I have seen this question asked so many times, that I felt compelled to tackle this topic in depth. See you in part #2.