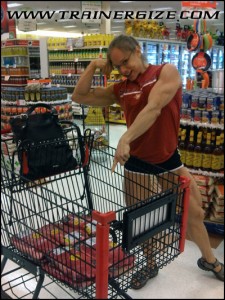 Consumption of red meat has been associated with fat gain (iand weight gain) because of its high energy and fat content. Even though the role of fat intake as a causative factor for obesity recently has been seriously questioned, and rightly so, red meat still is a food that’s on the forbidden or avoid list of most diet plans.

And while there are studies showing an association between meat intake and obesity 1-3, there are also studies not showing this 3-5. And when digging deeper in the data, many of the studies that have reported a significant association with meat intake and fat gain / obesity have several major flaws that invalidate their conclusions….

One of the latest, and largest study to date, concluded 6:

“Total meat consumption was positively associated with weight gain in men and women, in normal-weight and overweight subjects, and in smokers and nonsmokers. With adjustment for estimated energy intake, meat intake of 250 g/d (eg, one steak at approximately 450 kcal) would lead to a 2-kg higher weight gain after 5 years compared to the same diet with less meat. Positive associations were observed for red meat, poultry, and processed meat”.

This is a pretty bold statement! However a closer look at its methodology and data reveals major weaknesses:

First; usual dietary intake was assessed only at baseline and not during the subsequent years. It is well recognized that peoples food habits often change over time. And it doesn’t take a rocket scientist to understand that in order to track changes over time, at least two measurements are required. And the baseline food intake assessment was done with questionnaires, which are infamous for being inaccurate 7-9. Using a methodology that begs the question “how bad is good enough” will obviously not provide very reliable data 8.

Second; in several centers, participants who consumed more meat actually had less weight gain, whereas those with lower meat consumption had higher weight gain. Despite this, and despite the very large number of participants (about 103,000 men and 270,000 women), the researchers behind this study lumped them all together in the statistical analysis. Also, the assessment of physical activity, which is strongly related to food habits 10, was done via self administered questionnaires, which do not accurately reflect objective physical activity or fitness data 11, 12. Therefore, the stated adjustment for a possible influence of physical activity on the observed weight change cannot be relied upon.

Third; the researchers reported an effect based on a combination of meat sources, but their analysis indicate that after exclusion of participants with chronic diseases and those likely to misreport energy intake at baseline, the following was found:

– red meat is not the villain in the association of meat intake and weight gain
– the association with poultry was attenuated
– processed meats were the strongest predictor of weight gain
This indicates that processing, or factors associated with consumption of processed foods are involved rather than meat per se.

Fourth; and probably the most important shortcoming is that the observed weight changes may be due to changes in either lean body tissue or fat mass or both 13. Meat is a high-quality source of protein for building and maintaining lean body mass. Consequently, the noted association between meat intake and weight change may partly be due to gain of lean body mass in participants with high meat intake. It is well known that dietary protein plays a major role in developing and maintaining lean tissue mass in the body during growth in infancy, through adulthood while dieting, and particularly in preventing loss of lean body tissue and sarcopenia in elderly individuals over 50 years of age 14. The loss of lean body mass is a particular problem in individuals over 60 years of age. In older individuals, a higher intake of high quality protein, such a red meat, helps to prevent loss of lean body tissue, resulting in better muscle strength, bone density, and physical functioning 15. Thus, it is interesting that the association between meat intake and weight gain was stronger in participants that were over 45 years of age. An alternative interpretation of this finding is that a higher intake of red meat preserves lean body mass (including muscle mass), and that the weight gain seen with higher intakes of red meat is not fat gain. This interpretation of the results is congruous with other studies showing that an increase in protein intake from meat and other sources enhances diet induced fat loss 16-19, contributes to weight control 20, 21 and prevents gain of body fat 21, 22. Thus, studies that don’t measure body composition don’t tell much about the role of meat for body fat control. Because of all these methodological flaws, the conclusion that “a decrease in meat consumption is recommended for body weight management and improvement of health” is totally misleading. So if you come across any anti-meat proponents who bring up this study to support their position, take them out to dinner and get them a huge juicy steak!

Thus, the lean red meat eaters consumed almost 200 cal (178 cal to be exact) extra per day. No changes in physical activity were reported. However, after 36 weeks (9 months), there were no differences in body weight between the two groups 23. Theoretically, since the energy content in 1 lb of body fat is about 3500 calories, this daily caloric excess of 48,000 calories (178 x 30 x 9) should have resulted in a fat gain of almost 14 lb (48,060 / 3500). No explanation for this finding was provided. And this study, in contrast to one above, was well done and used detailed food records, which are one of the best tools for estimating dietary intakes 9, 24. Thus, because a food contains more fat and calories doesn’t necessarily have to mean it will cause fat gain.

Another study compared intake of beef with that of lean fish and poultry 25. Three groups of male subjects each rotated in a crossover design through 3 experimental periods that lasted 26 d each. All the diets were planned to provide 2800 calories per day, of which 18% came from protein, 53% from carbohydrate, and 30% from lipids (polyunsaturated-to-monounsaturated-to-saturated fatty acid ratio: 1.0 : 1.1 : 1.0); 268 mg cholesterol/d; and 29 g fiber/d.
The 3 experimental diets had no differences in food composition with the exception of the protein source tested, which was:

69% of daily proteins came from beef, fish, or poultry, and the remaining was from vegetable sources. This corresponded to about 400-500 g of the respective protein foods.

Body weight was taken every 2 days. Subjects were informed that they had to avoid alcohol consumption and that they should maintain the same activity level throughout the study. They were also asked to consume nothing besides the prepared meals they were given by the food lab. It was found that no experimental period resulted in any body weight differences 25. That is, on iso-caloric diets, the protein source did not affect body weight, meaning that there is nothing inherently bad with red meat for weight control, which is a common misperception. This is supported by other studies 26, 27.

There are conflicting recommendations regarding the appropriateness of red meat versus white meat consumption during fat loss diets. An interesting study examined changes in body weight in overweight women who followed an energy restricted diet (500 calories per day less than usual) with lean beef or chicken as the primary protein source, while participating in a fitness walking program. Body weight, body composition (by hydrodensitometry), were measured at baseline and after 12 wk.
The results showed a significant weight loss that was similar between the beef group and the chicken group. Both groups showed significant reductions in body fat percentage, with no significant differences between groups. This study demonstrates that weight loss and fat loss can successfully be accomplished through diet and exercise, whether the dietary protein source is lean beef or chicken 28.

For all meat lovers, these are good news; whether your goal is to pack on muscle or get in shape, you can enjoy your steak without worrying. If you are on a diet and struggling to cut you calories, try some lean beef cuts, like the ones you can find on Eat To Grow.

“But doesn’t red meat cause heart disease, diabetes and cancer?” you might be thinking. I will cover this in depth in an upcoming article. If you cannot wait, there is good news; as long as you exercise regularly and eat your veggies you don’t have to fear that your meat intake will jeopardize your health. Especially if you are choosing the kind of high quality meat that you can find at Eat To Grow.