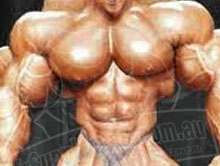 With an abundance of new products being made available for the bodybuilding community over the last few years, the market has become saturated with nearly every variety of muscle-building, fat-shedding compounds imaginable. No doubt, BB’rs of the early 21st century have a decisive advantage over their 20th century counterparts, but with this thriving market comes a tidal wave of new information. If one is not diligent in continuing his self-education, it is easy to fall behind in the ever-advancing realm of BB’ing product development and application. However, there is one category of supplementation which has had nearly everyone talking in recent years…the category of myostatin inhibitors.

What is myostatin? In short, myostatin is an endogenous substance which limits muscle growth in humans and animals. More specifically, Myostatin is known as growth differentiation factor 8 (or GDF-8) and is encoded by the MSTN gene in humans. It acts as a negative regulator of muscle growth through the inhibition of AKT-induced protein synthesis and muscle cell differentiation. It belongs to the TGF beta protein family and is produced primarily in muscle tissue, which is then released into circulation, exerting its effects by attaching to and activating the activin type II receptor. Myostatin is an extremely potent regulator of muscle hypertrophy, having the potential to not only accelerate muscle growth beyond natural limits, but to change our genetic set-point in terms of muscular size. The positive applications in bodybuilding are obvious.

The myostatin gene was indentified in 1997 by geneticists Se-Jin and McPherson. Within a very short time of its discovery, myostatin research was well under way and by 2001 we witnessed the first successful attempt at myostatin gene manipulation, in which geneticists introduced a mutation into the bodies of mice, leading to the suppression of myostatin levels. The result was that the mice grew massive in size, showcasing muscular development far beyond their other mice brethren. Since then, research & development has continued at a fairly aggressive pace, with multiple pharmaceutical companies all clamoring for a piece of the pie within the prescription drug marketplace.

We have recently witnessed the immergence of several, effective myostatin regulating drugs, with the most recent of these being Myostatin-HMP. This product works by binding to free myostatin within the bloodstream and target tissues, effectively is prohibiting it from exerting its effects within muscle tissue. When myostatin levels are lowered, the walls come down (figuratively speaking), allowing for the accumulation of muscle protein at an exaggerated rate through both enhanced protein synthesis, as well as an increase in the rate of muscle cell differentiation.

While scientific data is an important piece of the puzzle when it comes to our understanding of myostatin inhibitors, it forms an incomplete picture by itself. Real-world evidence is crucial in providing us with not only tangible results, but it helps us establish optimal guidelines for use in our research subjects. When evaluating the real-world effects of this drug, there are several commonalities which have become apparent among research subjects. Thus far, the general consensus seems to be that results manifest quickly; within just a few days of use. The first effect typically noticed is an increase in whole-body muscle fullness. This positive feature is a trait shared with other myostatin inhibitors and therefore, is not unexpected. This increase in fullness is of sufficient intensity to elicit visual changes within the research subject’s physique. At around the same time, an ongoing decrease in bodyfat is usually observed, which some commenting that Myo-HMP delivers superior fat loss results compared to other myostatin inhibitors. By about 7-10 days in, the effects of Myo-HMP can be clearly seen and felt, with these effects becoming more pronounced as time continues to pass. At this point, it appears that the average weight gain is around 8-12 lbs after 30 days of research, although a percentage of users have experienced even greater gains during an equal period of time.

Anyone considering purchasing Myo-HMP should understand that there are two version of the molecule being sold in the marketplace. Specifically, the difference comes down to whether or not the molecule has been “tagged”. Cheaper versions of Myo-HMP contain a tag. This tag is an inactive (in terms of growth potential) portion of the molecule, which is responsible for causing the user to experience feelings of sickness when administering this version of this product. In contrast, non-tagged versions do not cause these bothersome side effects.

With myostatin research & development pressing steadily forward, the BB’ing community now has full access to an impressive catalog of myostatin inhibiting drugs, with Myo-HMP as the latest addition to the roster. This makes achievement of our bodybuilding & strength related goals that much easier.