Newer PostCaffeine Alters Estrogen Levels
Older PostFried foods not a heart health risk if you use the right oils, say researchers
Share on FacebookShare on TwitterShare on LinkedinShare on Pinterest 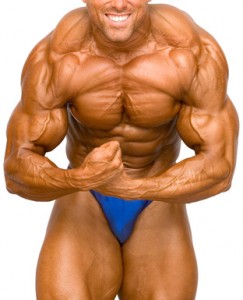 Muscle dysmorphia is like “reverse anorexia,” where you can never get muscular enough, big enough ("bigorexia") or ripped enough. As a bodybuilder, involved in a sport where there is a common incidence of body image issues among participants, I find scientific studies on muscle dysmorphia interesting. I just read a new one that was recently published in the Journal of Strength and Conditioning Research.

Does muscle dysmorphia exist? Yes. The real question is, where do you draw the line between pursuit of excellence and self image disorder? It’s an interesting dilemma...

“a condition in which individuals are preoccupied with the belief they are insufficiently large and muscular, and they may be obsessed with weightlifting, dieting and other activities aimed at increasing size and definition. Case reports and research reveal that these individuals also experience anxiety about having their bodies viewed by others, experience impaired occupational and social functioning and participate in risky health behaviors such as physique enhancing drugs.”

Clearly, weight training is a positive endeavor. Natural (drug-free) bodybuilding is also a positive endeavor, but I don’t dispute the fact that there’s a fine line where the “obsession” with muscular development can turn into a self-image disorder or an obsessive-compulsive disorder.

On one hand, we bodybuilders often defend even our most ardent pursuits of our ideal physiques by saying, “obsessed is a word the lazy use to describe the dedicated.”

I particularly dislike hearing the ‘talking head experts’ - even if they do have PhD’s in psychology - say that my fellow bodybuilders and I are training too much and spending too much time in the gym in preparation for competition, whereas athletes in most other sports spend far more hours practicing their craft - sometimes more hours in a day, than I spend weight training in a week!

It's called pursuit of excellence!

On the other hand, its clear that this condition - muscle dysmorphia - is every bit as real as anorexia. The research confirms it and I've seen, with my own eyes, marriages crumble because one spouse put bodybuilding dieting, training and competition ahead of the relationship.

The researchers in this area agree that weight training and pursuit of muscular development are not inherently negative, and especially so when the goals include doing it for health and performance. They suggest that when these pursuits start to interfere with a person’s health, well being and social functioning, that’s when it becomes detrimental.

In this most recent study (there have been many studies published previously), they discovered that symptoms of muscle dysmorphia decreased during training and on training days as compared to rest days.

They suggested many possible causes including reasons for training (training for size/bodybuilding = greater symptoms and reduction of symptoms on workout days than those training for health or performance).

And this one was very interestingly - muscle pump! Seeing the increased muscle size from pump during a workout reduced the symptoms, presumably because it temporarily lead the individual to having a body shape closer to their perceived ideal.

The dysmorphia symptoms that were measured in this study included:

In my view, it’s symptom #3 added on top of #1 and #2 that might constitute a diagnosis of “muscle dysmorphia” in a sense that it is a negative, like anorexia is a negative.

I believe that identifying specific characteristics of symptom #3 - functional impairment - is most helpful and revealing. For example:

It's an interesting dilemma to be sure, because a very good bodybuilder MUST have a drive for more muscle size. I would even go so far as saying that to be a champion bodybuilder, you have to have intolerance for your current appearance and that is quite similar to the drive for more size. Rather than symptoms of disorder, these are pre-requisites for success!


CLICK HERE to learn More About Burn the Fat, Feed the Muscle

WOMEN CLICK HERE and find out how you can get as lean as a fitness model or figure athlete so you too can see more abdominal muscle definition and get a tight, trim, toned waistline

Tom Venuto is the author of the #1 best seller, Burn the Fat, Feed the Muscle: Fat Burning Secrets of the World's Best Bodybuilders and Fitness Models. Tom is a lifetime natural bodybuilder and fat loss expert who achieved an astonishing ripped 3.7% body fat level without drugs or supplements. Discover how to increase your metabolism, burn stubborn body fat and find out which foods burn fat and which foods turn to fat by visiting the home page at: BurnTheFat.com