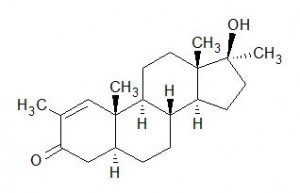 Superdrol is on its way out…as the DEA is once again itching to get its hands on one of our most prized products. With the impending ban, its days on the OTC market are numbered, as many companies having already pulled it off their shelves. “No big deal”, one might say, but in truth, there will be more than a few people disappointed to see it go and with good cause. After the banning of the infamous M1T, the OTC designer steroid market was stripped of its most potent anabolic.

In fact, M1T was the most potent muscle-building oral steroid ever produced by any manufacturer, including pharmaceutical companies, the blackmarket, or supplement retailers. With the emergence of Superdrol, the void was filled, as not only did SD approach M1T in terms of overall muscle-building capability, but it did so while improving the quality of one’s musculature, unlike the massive bloat and water retention characteristic of M1T. For over 6 years SD ruled the OTC designer marketplace, maintaining dominance over its peers. Now that SD is retiring, what anabolic will be able to take the reins and assume the throne?

Not too long ago, this question would’ve been hard to answer, as the current roster of OTC anabolics aren’t up to par when it comes to assuming the role of lead steroid. Now, if any OTC steroid is truly going to be able to “replace” SD, we are going to need to be looking at something new altogether. Fortunately, such an alternative exists by the name of Methylstenbolone. M-Sten, as it will be referred to from here on out, is not only able to replace SD, but may possibly be able to outperform it. This is a tall order, as SD is well known for producing tremendous gains in not only size, but in strength, as well. Let’s take a closer look at some of M-Sten’s defining characteristics, in order to familiarize ourselves with what is destined to become the next great OTC designer.

In 1966 M-Sten was researched by Searle Laboratories, along with several other compounds; several of which have become well known in the OTC designer steroid world. Some of the steroids included in this research were Desoxymethyltestosterone (Pheraplex), Methyl-1-Testosterone (M1T), and 17a-methyl-1-androstenediol (M1-Alpha). At the conclusion of this research, the results were compared against several other well known steroids, all of which are still regularly used today. The results of this comparison were shocking, with the researchers commenting that “Even the least active compound in Table 6 (see below) possessed a higher relative myotropic (muscle-building) potency than previously has been obtained with several clinically interesting compounds, which have been studied under identical conditions, i.e. Oxymetholone (Anadrol), Oxandrolone (Anavar), Stanozolol (Winstrol), and Methandrostenolone (Dianabol).”

Even a novice in the world of steroids understands that Anadrol and Dianabol are considered “strong” steroids. In fact, Anadrol was long believed by many to be the most potent oral steroid in the world when it came to adding overall muscle mass. For every single steroid studied in Table 6 to be considered more myotropic than Anadrol, we are indeed looking at a powerful class of compounds. See below: 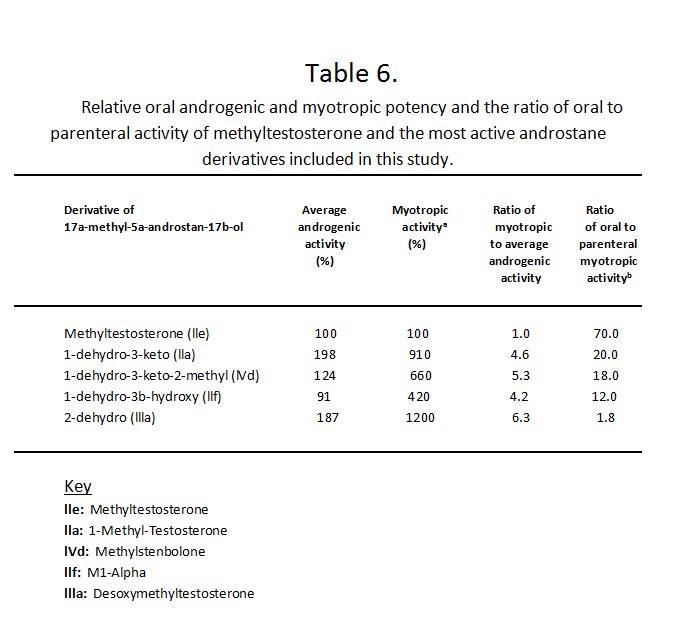 As you can see by the chart above, M-Sten is over 2/3rd as myotropic as M1T, per mg. In comparison, Superdrol’s anabolic rating is about 400, making M-Sten the more potent drug. While a drug’s anabolic/myotropic rating doesn’t always directly correlate with its ability to induce size & strength gains (think Anavar), if we use other drugs in this class as a guidepost for what kind of results to expect relative to their myotropic rating, M-Sten can be expected to deliver. Fortunately, we do not have to guess when it comes to this steroid’s muscle building potential. In terms of lean tissue gain, M-Sten ranks right up there at the top of the heap, likely providing greater gains per mg than any other OTC designer on the market, as well as surpassing nearly every other commonly produced oral steroid, such as Anadrol, Dianabol, etc.

Structurally, M-Sten is an amalgamation between SD & M1T, sharing significant characteristics of both. However, in terms of visual results, M-Sten will more closely resemble Superdrol, providing the user with a hard, dense, and dry appearance to his muscularity. When it comes to strength enhancement, M-Sten will perform impressively, rivaling steroids such as Superdrol and Anadrol. No doubt, this is a drug strength athletes will be able to put to good use. In accordance with other DHT derivatives, M-Sten also lacks the ability to aromatize to any degree, nor is it capable of 5a-reduction.

Like all methylated steroids, M-Sten will exhibit some degree of liver toxicity, but when used responsibly, which entails proper dosing and cycle length, this should remain a non-issue. When discussing hair loss, it should be remembered that the likelihood of experiencing this side effect is largely based on the individual’s genetic predisposition. Still, M-Sten does not seem to be particularly prone to causing this side effect, being much less likely than Testosterone or Trenbolone to initiate hair loss. Overall, the uses for which this steroid finds itself suitable are numerous. It can be used effectively in off-seasons BB’rs, pre-contest competitors, or strength athletes all to good effect.

In terms of dosing recommendations, the jury is still out, as it is still to new for enough users to have provided feedback sufficient to come to any definitive conclusions. None the less, based on the dosing recommendations of similar steroids, it is highly likely that the ideal dosing range will end up somewhere between 20-30 mg/day. Currently, there are only two known supplement companies offering this product at a dosage of 4 mg per cap. Because of the low dose per cap, most users are administering only 4-8 mg per day, as administering 20-30 mg would require the purchase of multiple bottles per cycle. I have not personally seen any online logs of users administering 20-30 mg per day, so it would be very interesting to see what type of results this dosing regimen would bring forth, especially given the fact that even 8 mg per day appears to yield impressive results.

Well, we won’t have to wait much longer, as IronMagLabs is about to release the highest dosed version of Methylstenbolone yet. As usual, IML doesn’t cut corners by offering under-dosed products designed only to spare profits, which occurs so frequently with other companies. When IML does something they do it right and for this reason they will be pulling out all the stops with the upcoming release of their newest product. This formulation will be the most powerful product on the market…hands down, which includes a full 10 mg of Methylstenbolone and 10 mg of Dimethazine per cap! This will provide users with the opportunity to take full advantage of M-Sten for the first time since its release just a few months back. Personally, I believe few people took the loss of SD as hard as me, but with the imminent release a properly dosed Methylstenbolone product, my tears have dried up and I am excitedly looking forward to the release of what will likely become IML’s best product yet. For everyone out there who loved SD, you will love Methylstenbolone.