Is it True There’s No Such Thing As An “Essential Carbohydrate?” 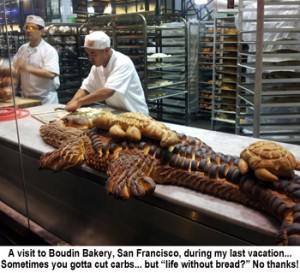 Is it True There's No Such Thing As An "Essential Carbohydrate?"

Q: "Dear Tom, in my research and experience I've come to believe that carbohydrates have no requirement for survival. I've also come to the conclusion that no diseases will occur just because you don't eat carbs. In fact, I think that the opposite is probable to occur if we include too many carbs. Why do you think carbs are so necessary in your opinion?”

A: Technically speaking, that is correct, there is no such thing as an "essential carbohydrate" because the nutrition textbook definition of "essential" refers to whether your body can manufacture a nutrient on it's own or it has to obtain it from food.)

Your body is capable of producing glucose (blood sugar), from other substrates, even protein (through a process called gluconeogenesis).

Your body can, of course, also run on fat for fuel and in the absence of incoming carbohydrates, it can produce ketones which can even be used by your brain as fuel (your brain normally functions only on glucose).

So sure, this means you can survive on protein and fat, just as low carb diet authorities claim, but my question is, do you want to "survive" or do you want to excel?

You can survive for weeks without food, but that doesn't mean it's a good idea to eat nothing for weeks on end...

You can lose weight on a diet that consists of 100% twinkies, provided your calories are in a deficit every day. That doesn't mean it's a good idea to eat nothing but twinkies every day...

Likewise, just because you can live off protein and fat doesn't mean that's the best way for everyone to do it either, especially for athletes.

Let me put this "essential carbohydrate" question into the proper context so you see where I'm coming from. When this subject is brought up, it's usually a question asked or an argument made by a low carb proponent. They are trying to debate that we don't need carbs. Again, technically, that is true, but that doesn't mean you should eliminate all carbs. An "essential" nutrient is just a technical definition.

For example, there's data showing a drop in thyroid when carbs go below approximately 120 grams per day.

The studies on carbs and thyroid response go back to the 1970's but the first one to pin down some specifics on carb intake was published in 1982 in the Journal of Endocrinological Investigation.

The researchers split up obese patients into different groups to test the effect of carbohydrates and other dietary sources on peripheral thyroid hormone metabolism. They found that T3 levels were readily affected by dietary intake. The VERY interesting finding was that T3 levels fell only when the carbohydrate content of the diet was below 120 grams per day, regardless of the calorie intake.

In fact, they tested very low calorie levels in some of the groups (under 1000 per day) but still it was the low carb groups that suffered a drop in thyroid. They concluded that a threshold exists in dietary carbohydrate below which thyroid metabolism is negatively affected and that the carb content of the diet is more important than other macronutrients in modulating peripheral thyroid hormone metabolism.

In a related hormonal note, we also know that the anti starvation hormone leptin falls with both reduced calories and reduced body fat levels. But it's an increase in carbohydrate - above all the other macronutrients and above calorie level alone, that restores leptin to it's normal levels and thus helps reduce the symptoms of the starvation response.

Personally I do see advantages with carb moderation or even significant carb restriction in some cases. I also like cyclical low carb diets (aka "carb cycling", and OF COURSE - carb quality matters! But I do not like carb elimination and I despise carb demonization.

In the Burn the Fat, Feed the Muscle program there is a reason that we have progressive phases with progressive reduction in carbs and corresponding increases in protein, but NO WHERE do I recommend the complete removal of carbs or any type of extreme low carb diets. The rock bottom carb levels are usually pretty close to that 120 gram threshold identified from the research.

Co-incidentally, the government recommendation for carbohydrate intake - the dietary reference intake (DRI) - suggests not dropping below 130 grams. And as another interesting co-incidence, although I did mention that your brain can function on ketones, the brain uses about 130 grams of carbs a day. (when I was prepping for bodybuilding contests and needed to get ripped, I usually took in no less than 175 grams per day - which co-incided pretty closely to my LBM).

I do know a handful of people who like keto diets and seem to function okay on them, but I think we have some pretty good reasons to suggest that 120-130 grams per day is an optimal low end threshold for carb intake for most people who are active and training hard - cardio and resistance training (and even that is intended for maximum fat loss / deficit eating).

Your personal response at various low carb levels may vary, and I know some people, especially females, who are smaller than men, who go a little lower (100 grams or so) on very strict low carb - that's not uncommon for figure athletes or fitness models.

But most athletes, including strength and physique athletes, will tell you that very low carb diets kill their energy and their workouts, not to mention it turns them into a miserable grouchy sumbitch... (I think I should print up some T-shirts with a scowling face that say, "DON'T TALK TO ME! IT'S LOW CARB DAY!" Or how about this: I envision a photo of a person's head up in the clouds and a caption that says, "WARNING: LOW CARB BRAIN FOG").

I believe that nutrition MUST be customized, and that prescribing low carb for everyone is just as mistaken as prescribing high carb to everyone. There's no "one-size-fits-all" diet.

People are continually amazed and delighted when they see how much flexibility there is for a wide range of carb intakes in a bodybuilding-style nutrition plan like Burn the Fat, Feed the Muscle. (No more food cops saying you can "never eat this" or "never eat that.")

Wouldn't you rather have the choice of choosing a carb intake that's customized for you rather than be shackled to one rigid prescription that might work better for someone else? You can learn more about the flexible approach to carbs - it's the same fat loss diet program bodybuilders and fitness models use - on the home page - just click here: www.BurnTheFat.com

Tom Venuto is the author of the #1 best seller, Burn the Fat, Feed the Muscle: Fat Burning Secrets of the World's Best Bodybuilders and Fitness Models. Tom is a lifetime natural bodybuilder and fat loss expert who achieved an astonishing ripped 3.7% body fat level without drugs or supplements. Discover how to increase your metabolism, burn stubborn body fat and find out which foods burn fat and which foods turn to fat by visiting the home page at: BurnTheFat.com