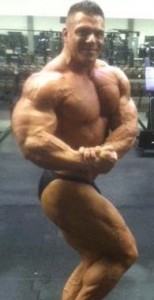 Insulin. Perhaps the most controversial performance enhancing drug used in BB’ing today, insulin’s talent for causing dramatic physical change over a short period of time is unrivaled by all but a select few drugs. For first time users, bodyweight gains of 10-12 lbs in the first 2 weeks are not uncommon. Being the primary hormone responsible for nutrient transport into cells, its ability to maximize the anabolic response, while increasing glycogen storage beyond natural limits, are the primary functions this peptide has become known for in the bodybuilding community.

In fact, insulin has often been dubbed the “most anabolic hormone” on Earth, but in this article our focus will not center around insulin’s role in the muscle growth process, but rather on its ability to perfect the onstage physique by maximizing muscle fullness, while simultaneously minimizing the potential for spill-over.

With muscle fullness being a significant determinant in one’s overall level of condition, it makes sense to maximize this aspect of one’s appearance. Failure to this achieve adequate muscle fullness onstage or even worse, coming in flat, will precipitate multiple negative outcomes. For one, the BBr’s musculature will adopt a deflated state, in which diminished glycogen levels and reduced intramuscular water combine to cause a decline in overall size. Secondly, a decrease in muscle hardness and density will manifest as a result, making the BB’r look softer than he truly is. Separation will also fade, as flat muscles do not push out against the skin as forcefully, making the skin appear thicker and blurring the crisp lines that would otherwise be apparent. Lastly, being flat can also be mistaken for subcutaneous water retention, as the effects both have on appearance are often similar.

Spilling over can be equally disastrous in terms of stage appearance. Months of hard work can be ruined over just a few days of miscalculating, with a soft, watery appearance as the result. Even with all the risk present in many of these last minute adjustments, many BB’rs are still willing to assume such risk in order to improve their conditioning by a few percent. The search for that elusive combination of maximum fullness and the ultimate in dryness is the holy grail of all competitive BB’rs. No more than a few will attain this look at any one show and more often than not, no one will.

Still, there is a compound we can employ to increase our chances of achieving this goal. This compound is insulin. While many know this drug as an off-season mass-gainer, insulin’s value extends beyond the acquirement of muscle tissue alone. It has the ability to maximize onstage muscle fullness, while simultaneously minimizing the odds of spill-over. It is commonly understood that insulin is capable of increasing muscle fullness through increased glycogen & intramuscular fluid retention, but what is less understood is that this enhanced ability to store glycogen decreases the chances that spill-over will occur should the BB’r consume too many carbs during the loading process. Adding insulin into one’s pre-contest carb-loading program effectively increases the holding capacity of the muscle cells, allowing them to store larger amounts of glycogen and in turn, water. Therefore, an amount of carbohydrates which might have caused spill-over under normal circumstances might be made inconsequential when using insulin. For those who have previous experience with this drug, insulin can be an effective adjunct for this purpose.

Generally, BB’rs who have entered the final phases of contest prep are moderately to severely glycogen depleted. Under these circumstances, insulin’s 1st priority will be the re-filling of muscle glycogen stores. However, insulin is sometimes avoided during the carb-loading process due to a false fear arising out of the belief that insulin, also being a fat storage hormone, may cause the individual to add body fat should it be used during this time. Nothing could be further from the truth. Insulin’s role in storing calories as body fat happens only in times of caloric excess, not when the individual has undergone months of caloric restriction and is experiencing severe glycogen depletion. Any fear regarding insulin’s ability to impair conditioning through body fat storage under such conditions, should be eradicated.

Through insulin’s ability to promote glycogen storage within muscle tissue, the chances of displaying a dry physique come contest day are improved. How? As mentioned above, when a muscle’s glycogen levels are increased, there is a concomitant increase in intramuscular water retention. For every gram of glycogen a muscle accumulates, roughly 3 additional grams of water are pulled into the muscle along with it. Not only is this exaggerated degree of intramuscular water retention the primary way in which insulin enhances muscle fullness, but it is the primary mechanism by which insulin improves the BBr’s chances of being in dry condition, as any subcutaneous water not pertinent to vital functions is more likely to be carried into muscle tissue through insulin’s nutrient transporting effects.

Another benefit of insulin use is its ability to increase the uptake of muscle volumizers, such as creatine, into muscle tissue. With creatine usage, the preponderance of muscle size gained is due to intramuscular water retention, while only a small portion is due to creatine storage itself. In similar fashion to glycogen, for every gram of creatine stored in muscle tissue, additional water is also pulled into the muscle with it. For this reason, any substance capable of increasing creatine storage beyond normal physiological limits will have desirable effects on muscle fullness, as well as muscle dryness, as a portion of the relocated water would likely be drawn from the subcutaneous region. The end result is bigger and potentially drier muscles. Regardless of whether we are talking about creatine or other muscle cell volumizers, insulin’s ability to positively affect uptake is another way in which this controversial drug can contribute to improved onstage conditioning.

As BB’rs we seek to manipulate any variable which might lead to improvements in our condition. To this end BB’rs routinely employ diuretics in an attempt to accomplish this objective. While diuretics can indeed be effective for “drying out”, they carry with them a significant degree of risk when it comes to one’s appearance. In an effort to come in dry through diuretic use, many BB’rs have instead walked onstage flat. This is the risk many take when using diuretics. Certainly, much of this is due to ignorance in not knowing how to properly administer these drugs, but regardless of how proficient an individual might be in this area, the fact remains that diuretics will never pull water only from the subcutaneous region; they will also pull water directly from muscle tissue. This means that diuretics will always cause a loss of muscle fullness. To what extent this will occur can vary between unnoticeable to extremely significant. While diuretics will likely retain a place within the arsenals of pre-contest BB’rs for years to come, insulin can serve as both a legitimate alternative, as well as an adjunct in achieving these goals.

Using insulin to achieve the goal of a fuller & drier physique does not pose much difficulty, but before I go any further I would like to point out that I am not advocating or suggesting that anyone use insulin for this purpose, as being able to use insulin safely requires a degree of competency which exceeds that of other performance enhancers. The risk factor involved demands it. Therefore, I will assume that anyone considering insulin usage, regardless of reason, demonstrates a thorough understanding and adequate skill level. Competency of use is even more important when administering insulin under these circumstances, as most BB’rs are not regularly using insulin throughout their prep, which will lead to increased insulin sensitivity and the need for more precise dosing. In addition, most BB’rs who are 1 week out from their show have significantly reduced their carbs by that point, further enhancing insulin sensitivity, so extra caution is suggested.

There are many ways in which one can utilize insulin to assist with the glycogen loading process, but one of the most simple and safest methods involves adding a small amount of insulin to each carb meal until glycogen levels are sufficient; just enough to effectively deliver the ingested carbohydrates into muscle tissue. Even though using insulin during the carb-loading process will increase the amount of carbohydrates which can be consumed without spilling over, it is not wise to consume more carbs than you normally would during a load. This will ensure that water stays where it should be…in the muscle, not under the skin. How much insulin is utilized will vary from person to person depending on insulin sensitivity, as well as the quantity of carbohydrates consumed.

By including insulin in one’s carb-loading program, most individuals will be able to hit the stage a solid 3-4 lbs heavier than would have been possible otherwise, without any decrease in conditioning. As always, safety first an good luck at your next competition.