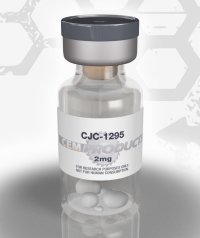 Numerous articles have been written about this category of peptides and for good reason. They are the only compounds which can stimulate the release of growth hormone in meaningful amounts in adults. We have seen many different supplements come and go over the years, which have claimed to elevate growth hormone levels, but none have been able to come even remotely close to achieving the levels seen with the use of exogenous traditional growth hormone…until now.

Since the release of the first GH peptide, we saw a number of other similar peptides hit the market in rapid succession. As of this day, there are about 10 or so GH peptides available for purchase, all of which can be legally purchased (for now, but knowing our government’s past history when it comes to effective performance enhancing drugs, perhaps not much longer) from numerous research/peptide companies.

While there may be quite a few different GH secretagogues out there available for use, I am going to address one in particular…one which has been falsely (in my opinion) maligned almost since its release several years ago. This GH peptides is commonly known as CJC-1295 “with” dac.

Don’t confuse this peptide with its similar sounding brother, CJC-1295 “without” Dac (more correctly known as ModGRF1-29, as I will refer to it from this point forward), as there are important differences between the two. Before we get into the meat of the discussion, let me cover some basics, as they relate to GH peptides. First of all, there are two categories of GH peptides, one of which is the GHRH’s (growth hormone releasing hormone) and the other, which is known as the GHRP’s (growth hormone releasing peptide). Research has overwhelming shown that when administering one GH peptide from each class in conjunction (GHRH + GHRP), a synergist effect is achieved, eliciting superior results compared to using just one alone. For this reason, it has been common practice to combine both a GHRH and a GHRP for years. This practice is well-founded, as it is backed not only by credible science, but by a massive amount of anecdotal evidence in terms of both personal experience and user blood work.

For about a half-decade now, we have been led by a few to believe that using ModGRF1-29 (CJC-1295 “without” Dac) is vastly superior to CJC-1295 with-Dac. The primary reason cited when making this claim is that CJC-1295 with Dac is said to cause what is known as “GH Bleed”. GH bleed is best described as a continuous and fairly steady release of GH from the pituitary gland into the bloodstream, which is caused by CJC-1295’s long 17 day active life. On the other hand, ModGRF1-29 only stays active for about 30 minutes, causing GH to be released for a much shorter duration of time, which is also known as a “pulse”. It is precisely and only because of ModGRF1-29’s shorter active life that some have viewed it as the superior peptide. However, while those who favor ModGRF1-29 over CJC-1295 with Dac put forth a few arguments to help support their point (which we will get to in a minute), this position does not look at the bigger picture, as it completely ignores the decades of user experience witnessed by the many athletes who have previously used exogenous GH.

While many times anecdotal evidence is weak by comparison, there are instances where it makes a very strong case and therefore, warrants serious consideration, as is the case here. With the primary purpose of GH peptide administration being the elevation of GH levels within the human body, it only makes sense that we evaluate the real-world experiences of BB’rs who have used exogenous GH previously. With any drug that has been used by 10,000’s of individuals over a timetable of decades, such an immense amount of collective knowledge is bound to provide us with tremendous insight as to how we might best administer such a drug, in order to achieve specific results. When it comes to GH, we are certainly left with no shortage of user experience, as BB’rs and other athletes have experimented with this drug in just about every way possible when it comes to both dosage and frequency of administration.

When speaking of the various GH peptides, even if we knew virtually nothing of their differences (which we do), the amount of data gleaned from previous & current generations of GH users alone would provide us with a solid foundation for conjecture when it comes to hypothesizing what results we might expect from GH peptides. However, because GH and GH peptides both result in an elevation of the exact same hormone…AND because we do know the key differences between the various GH peptides, we can draw more reliable conclusions. With each GH peptide being distinct in its ability to elevate GH levels in terms of both total GH output and pattern of release…and with these same two factors primarily determining how exogenous GH affects the body, we can refer to the vast amount of available user experience when attempting to extrapolate what results to expect when using GH peptides in various combinations and dosages.

Without getting too in depth, the main reasons we are told CJC-1295 with Dac should not be used and which are said to be directly connected to GH bleed are: 1) GH Bleed will result in acromegaly, which is a term used to describe excess bone growth, particularly in the bones of the skull, hands, and feet. 2) GH pulses are necessary for causing GH-induced muscle growth, and since CJC-1295 with Dac lacks this pulsatile ability, GH induced growth potential will be reduced. 3) Since men’s bodies produce GH in pulses and women’s produce GH in a more steady-state manner (GH Bleed), using CJC-1295 with Dac will result in an unnatural pattern of GH release.

Those are the primary reasons why a few voices in this industry have advised against the use of CJC-1295 with Dac and have recommended ModGRF1-29 be used instead. Before I address any of the arguments against CJC-1295 with Dac, I will first tackle the issue of perspective and how it can impact one’s decision as to what is considered to be the superior GHRH. Perspective is an important factor in making this decision, as the individual’s goals and priorities will, and should, reflect one’s choice. Since those reading this article are likely to be involved in one of the physique or strength sports/lifestyles, my defense of CJC-1295 with Dac will be addressed primarily to this demographic.

A physique or strength athlete is going to desire, in most cases, much higher levels of GH than an elderly guy who is only looking for a replacement dose of GH for quality of life purposes. As most of you know, higher levels of GH lead to greater increases in both lipolysis (which directly impacts fat loss) and a subsequent elevation in systematic IGF-1 levels (which directly increases protein synthesis). Obviously, these are desirable attributes, so in the minds of many, the more…the better. Some of those who have advised against the use of CJC-1295 with Dac have done so partially because they are not BB’rs/strength athletes and therefore, do not share a similar mind-set. Naturally, since they themselves would not want to experience the effects that higher-dose, continuous GH administration would bring about, their suggestions and approaches are tailored towards their own personal preferences…NOT those of BB’rs. The BB’ing community has long known that the length of time GH levels stay elevated has a significant impact on GH’s ability to deliver its intended effects, such as fat loss and sustained IGF-1 elevation. I will get back to this topic in a minute, but for now, let’s move onto addressing some of the arguments against CJC-1295 with Dac.

As mentioned above, one argument against the use of CJC-1295 with Dac states that if GH levels remain elevated for too long, then acromegaly may result. While this can ‘potentially” be true, it neglects looking at 2 very important factors, which play a significant role in determining whether someone will suffer from this side effect. Certainly, no one wants to be walking around looking like the “Elephant man” because they took too much GH for too long. Well, please allow me to place these unfounded fears to rest, so you need not worry any longer. First of all, even extremely high doses of CJC-1295 with Dac are only able to elevate serum GH to about 50% of what is experienced when administering a 10 IU inject of pharm-grade GH (which is excellent considering this was achieved without the synergistic aid of a GHRP). We know definitively, through decades of user experience that 10+ IU of GH/day, even when used for years on end, does not lead to the formation of acromegaly to any serious degree…if at all. Not only I, but many other individuals have known countless BB’rs who have chronically administered 10+ IU of GH/day and yet, I have never met anyone walking around with a deformed skull because of it. Even after witnessing BB’rs use upwards of 15-20 IU per day for years, deformation has been completely absent….and if it did occur, it was either imperceptible or I could not discern whether it was a natural process (as some facial features continue to became more pronounced as we age) or artificially induced. The bottom line is that way too many BB’rs have used GH at very high dosages for long periods of time and their skulls, hands, and feet all still look normal.

Yes, this is all anecdotal evidence, but good luck finding any other type of evidence in this realm, as no ethical professor will ever place a bunch of men on high-doses of GH for a decade or more. Because of this, we need to rely on…and can ONLY rely on what we have actually seen happen in the real-world with those who have used growth hormone at exaggerated dosages for long periods of time. Of the many individuals who have severely abused growth hormone, very, very few look to have suffered from any type of negative facial change. I have never seen a single pro BB’r exhibit what would be considered “acromegaly” to the point of deformation. If our current roster of pro BB’rs still look fine after blasting GH doses into the stratosphere, then my best guess is that you will to. Lastly, and of significant relevance to this discussion, is that for acromegaly to occur to the point of deformation, not only do GH levels need to be extremely elevated, but those levels need to remain elevated for long periods of time…years. So, I think it goes without saying that we can safely leave this scare tactic out of our decision making process when trying to decide which GH peptide is best for your BB’ing needs.

Newer Post
How to Effectively Mimic the Use of Growth Hormone with Peptides – Part 2
Older Post
Vitamin D: How to maintain healthy levels during winter