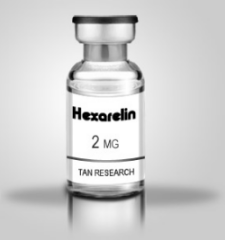 Hexarelin belongs to the category of drugs known as GHRP’s (growth hormone releasing peptides), which are also sometimes referred to as GH secretagogues. They include GHRP-2, GHRP-6, Ipamorelin, and Hexarelin. Hex’s primary function is to stimulate the pituitary gland to produce more growth hormone. Like the other GHRPs, it has a 2-fold mechanism of action, in that it causes an increase in GH through amplifying the natural growth hormone releasing hormone (GHRH) signal transduction pathway, as well as by suppressing the actions of Somatostatin.

Hexarelin demonstrates several unique characteristics which differentiates it from other GHRP’s. Most notably, Hexarelin has been shown to be the most potent GH releaser on a mcg to mcg basis, outperforming the other drugs in its class. It has also been shown to result in a more rapid rate of desensitization in comparison to the other GHRP’s, although the rate and extent at which desensitization progresses is often a topic of misunderstanding. Common dosing guidelines have frequently advised that researchers discontinue administration after just 2 weeks of use, suggesting that further experimentation would result in an insignificant GH spike, in response to this increased desensitization. This is not the case.

In one particular study, the aim of which was to determine the rate of desensitization with daily use, blood work was performed on test subjects at the end of weeks 1, 2, 4, and 16. After evaluating the results of this blood work, researchers concluded that Hexarelin, when dosed at 1mg/kg and 2mg/kg per day, displays minimal difference in desensitization after 1 week of treatment and 4 weeks of treatment. However, after 16 weeks of treatment, GH release was considerably blunted. We should also note that 4 weeks after Hexarelin was discontinued, researchers administered the peptide a 2nd time in conjunction with additional blood work. The results of this blood work revealed that 4 weeks of discontinuance had completely reversed the desensitizing effects of the drug.

Clearly, the outcome of this study has significant application to our own research efforts. Based on the above, Hexarelin can be researched at 4 week increments, or possibly longer, before a break is required. Since blood work was not done during weeks 5-15 of this study, we cannot say for certain at which point GH release starts to significantly decline, so it is probably better to play it safe rather than sorry in this case and keep personal research to 4 weeks at a time. In terms of off-time, while sensitivity to Hex’s GH releasing effects was completely restored 4 weeks after discontinuance, anecdotal evidence suggest that sensitivity will return within only 1-2 weeks of off-time.

Like most other GHRP’s, Hex also elevates prolactin and cortisol post-administration. Generally, prolactin and cortisol are viewed in a negative light, due to their ability to instigate unwanted side effects, BUT…levels must be elevated considerably outside of the normal range in order for any of these issues to manifest. Time and time again studies have shown that the GHRP’s do not elevate prolactin or cortisol high enough to be problematic.

Another manner in which Hexarelin distinguishes itself from the rest of the pack (aside from Ipamorelin) is in the area of appetite stimulation. As Ghrelin mimetics, many of the GHRP’s elicit an increase in appetite, which can range from mild to extreme in various individuals. Hexarelin is absent of this side effect, allowing those who have difficulty adhering to their diet a way to elevate GH levels without suffering through their self-imposed caloric deprivation. Certainly, this should be a consideration when selecting which GH peptide is right for you.

One possible side effect associated with Hexarelin is the disturbance of natural sleep patterns. These alterations in sleeping patterns may cause some individuals to have difficulty falling and/or staying asleep, but many do not experience this problem. At any rate, by avoiding use late at night, this potential issue is eliminated.

Growth hormone has numerous documented benefits, making it one of the most diverse drugs in our PED arsenal. Some of these benefits include:

Typical dosing guidelines for Hexarelin range between 50-200 mcg per inject, with 100 mcg being considered the standard. Most will find a dose of 100 mcg to be more than suitable. According to documented research, a single 100 mcg injection is capable of eliciting a temporary elevation in GH similar to what one would experience when administering 10 IU of GH in a single injection. The differentiating factor in this comparison is the length of time GH levels remain elevated post-injection. With exogenous GH, levels remain elevated for roughly 7-8 hours, while levels will fall to baseline within 90 minutes of administering Hexarelin. This is why most users will choose to administer this GHRP no less than 2-3X per day.
Hexarelin is the most efficacious GHRP available, allowing for impressive elevations in GH levels with few downsides. For those of you who normally research products such as GHRP-2 or Ipamorelin at traditional dosages, you may want to consider giving this unique GH peptide a shot for your next research project. Don’t let prior misconceptions fool you. Hexarelin is one of the most under-rated GHRP’s on the market and certainly more effective than other drugs in the same class on a mcg to mcg basis. So long as proper procedures are adhered to in terms of ON/OFF time (during which time an alternate GHRP can be researched), Hexarelin can be used as semi-permanent fixture in your GH peptide program.