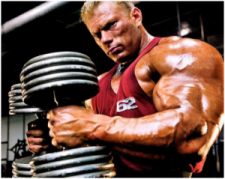 I am frequently asked if I have any certain strategies for gaining strength for sport that I find superior. To simplify the entire approach let me state that improving strength is really a matter of increasing 3 basic things. These things are:

In strength training you do this by practicing the specific lifts. As you become more proficient at a lift your body learns how to accomplish the task easier. Simple enough. For an athlete, this part of improving strength is of little concern unless you are a competitive lifter and your sport involves lifting. If you’re an athlete your goal is to make the muscles stronger so that the increased “general” overall muscular strength transfers into your sporting performance. What does it matter if you increase a lift by 100 lbs if all that increase comes through an improvement in technique rather then an increase in the strength of the muscles? Only a stronger muscle will transfer into improved athletic performance.

However, in order to “make your muscles strong” so that you can transfer general strength into specific strength you have to be proficient enough at the lifts you’re performing that you “can” stress the muscle optimally, so technique is also necessary. To illustrate, a raw beginner thrown into the weight room won’t be proficient enough at performing an exercise like a squat to really stress his muscles. His form will break down long before the muscles are trained optimally.

This involves training your body to use all of the “potential” muscle strength it has in a given task. Muscle fibers are grouped under motor units with each motor unit controlling a number of muscle cells or fibers. When a motor unit receives the signal from your nervous system to fire then all the muscle fibers under control of that motor unit also fire. So a muscle fiber or cell either fires all the way or not at all. Motor units are recruited on an “as needed” basis. When you lift a spoon to your mouth you signal your nervous system to “recruit” only a few motor units. When you curl a heavy weight you use a lot more. The more force required the more motor units you “turn on” and the more muscle cells you fire.

What’s interesting is that the average person is only capable of recruiting around 50% of their available motor units or using 50% of their “potential” strength in a given task. With training you can increase this to upwards of 90%. That means when you go in the gym and lift a 1rm load even though you’re straining as hard as you can you’re most likely not using anywhere near all your potential strength to lift that weight.

Think of motor unit recruitment as being very similar to “relative strength”, or strength per pound of bodyweight. Increasing relative strength means getting stronger without adding bulk. When you see someone who is “strong for their size” or a training technique that makes you “strong for your size” then know that that person has good motor unit recruitment abilities.

The difference between one’s “potential” strength and “actual” strength is called the strength deficit. If we were to take any individual and ask the question “how strong could this person be with the amount of muscle size he currently has?” and then compare that potential level of strength to his current level of strength and figure the difference, the difference between the 2 is called the strength deficit. The bigger the deficit the more room for increased motor unit recruitment you have. The smaller the deficit the less room for additional motor unit recruitment you have. Obviously, you should strive to have as small of a strength deficit as possible.

In a pure speed-strength activity in which the only load to overcome is one’s bodyweight, simply gaining strength is not enough. Studies have shown the key to running faster and jumping higher is relative strength and relative power, or force and power per pound of bodyweight. It isn’t merely the amount of force applied to the ground that increases speed, quickness or jumping ability; it’s the amount of force in relation to bodyweight.

If force alone was the major factor in speed, then a 400-pound man able to squat 800 pounds would win every race -but we know that’s not what happens. If we match our 400-pound behemoth against a 160-pound man who can squat 500 lbs, there’s no contest.

Once you are able to recruit and use nearly all the muscle you have then the only way to improve is to increase the amount of horsepower that each contracting muscle cell generates. You do this by increasing the amount of protein contained in each muscle cell or, simply, get bigger muscles. When you do this a given motor unit will now put out more force when it fires since the muscle cells under it’s control are now bigger.

The 150 lb. guy in the example I used above can increase his performance by getting bigger muscles since he’s already most likely able to recruit nearly all his available motor units.

Strength training techniques that are good for increased motor unit recruitment and relative strength include:

1. low rep “relative” strength training protocols (<5 reps per set)
2. low volume protocols (<10 sets per session)
3. Sets – might range from 3 to 8 for the primary exercise
4. Frequency – at least twice per week

When performing low reps at low volume the muscle cells aren’t under enough prolonged tension to cause much muscular damage. The heavier loads involved with the lower reps train the nervous system to recruit more motor units.

For example, a max squat will make you stronger but tends not to do a whole lot for muscle size.

Training techniques that are good for improving the horsepower behind a firing motor unit include:

When performing higher reps the muscle cells are under enough prolonged tension that you damage them. They respond by increasing their protein content, coming back a little bigger.

The extreme example of this type of training is bodybuilding training.

Obviously, over the course of your training career, in order to get stronger you are going to need both more motor unit recruitment and bigger muscles. Most routines out there combine both as it’s about impossible to completely zero in on one or the other. However, in general a set of a strength training exercise either focuses more on making you stronger or it focuses more on making you bigger. From now on before every workout and during the planning of a training cycle ask yourself, “How is this exercise going to improve my performance?”

– Performing sets of 10 reps will likely be more effective at making you bigger then sets of 3 or 5 reps will, if the number of sets are the same.

If bodyweight is an issue, as it would be if you were a football player and need to get bigger, then your program should include both relative strength training methods and methods designed to increase your muscle size. Often a very thin individual will find the easiest path for them to gain relative strength is by increasing muscle size since the strength gains they make overwhelm their increased bodyweight. An individual in a sport like track and field can train strictly for relative strength most of the time.

Now let’s get to some specific examples.

Until you’ve developed a foundation there is no need to use advanced training techniques. A greater frequency of training works particularly well for beginners and novice athletes. They need to develop the “skill” of the particular movements they’re using and bridge the gap between their “actual” strength and “potential strength”. For this type of trainee it can be beneficial to have 3 workouts per week using low reps. Unless you have at least 2 years of prior training experience I would use a split like the following:

Train 2-3 days per week and train the whole body at each session. Keep the total volume low.

*Alternate between session A & B.

Perform 2-3 sets of 2-3 reps, never to failure, using a step-type loading approach. Increase the weight for 3 consecutive workouts then decrease it for one and build back up.

To explore things further check out the article “Strength and performance strategies for intermediate and advanced athletes.”