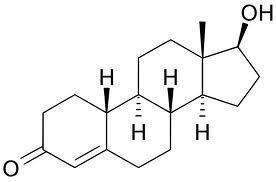 Nandrolone decanoate (Deca), the active ingredient in Deca-Durabolin, may cause brain damage. According to researchers at Semnan University in Iran nandrolone injections reduce problem-solving capacity after as little as four weeks. In lab animals. We’re not convinced yet. The Iranians did experiments with male rats. Half of the animals were given an injection containing 15 mg nandrolone decanoate per kg bodyweight every four days for a period of four weeks. [ND] Converting this to the human equivalent would mean that a pharmacological bodybuilder weighing 100 kg who injects once a week would have a dose of 570 mg nandrolone decanoate per week. Not an amount that would cause raised eyebrows in doping circles.

The other half of the rats were given injections containing no active ingredients. [VEH]

At the end of the four weeks the researchers trained the rats in an aquarium that resembled the one shown below. The aquarium contained an invisible platform that the rats could rest on.

The researchers put the rats in the aquarium every day for five days and measured how long it took the animals to find the platform. The shorter the amount of time the better their brains functioned.

The rats that had been allowed to run on the treadmill [VEH/EXC] discovered the platform faster than the inactive rats [VEH/SED]. So exercise makes the rats cleverer. The sedentary rats that had been given nandrolone, on the other hand, took longer to find the platform [ND/SED] and even longer if they had been allowed to run [ND/EXC]. So nandrolone made the rats dumber, and physical exercise boosted the dumbing-down action of the steroid.

A popular theory among neurobiologists is that learning processes develop better the more BDNF the brain manufactures. The researchers discovered that nandrolone boosted the production of BDNF, and even more so in combination with exercise. Apparently BDNF doesn’t always activate cognitive capacity, and a bigger increase in BDNF secretion in the brains of physically active steroid users is even associated with a reduced problem-solving capacity.

“Our findings suggest that chronic use of AAS disrupts learning abilities of young student athletes, who may be abusing anabolic steroids and are learning new concepts in school”, the researchers conclude.

We just wonder though whether the experiment was well thought up. Under normal conditions rats can’t stand water. That dislike of water is crucial to the proof provided in this study. But what if the nandrolone actually reduced the rats’ aversion to water?

It’s not impossible that this is the case. We know from animal studies that androgens reduce pain stimuli and make lab animals less fussy about food with a different taste. So maybe androgens reduce rats’ fear of water too. [Appetite. 1993 Feb;20(1):1-11.]