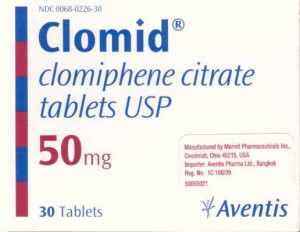 Daily dose 25 mg Clomid doubles men’s T levelsClomid can help men with low testosterone levels and low sex drive. Researchers at the Centro de Andrologia e Urologia in Porto Alegre, Brazil came to this conclusion after studying 125 hypogonadal men. The participants in the Brazilian study had a testosterone level of 300-400 nanograms per decilitre. Their levels were within the limits of what doctors regard as normal – 200-1200 nanograms per decilitre – but they were on the low side. The men complained of lack of libido.

Progressive doctors have been known to prescribe testosterone products for these complaints. They are effective in the short term, but may have long-term side effects such as “skin irritation, gynecomastia, nipple tenderness, testicular atrophy and decline in sperm counts”, according to the researchers.

Clomid – active ingredient clomiphene citrate – has none of these side effects. It is an anti-oestrogen that makes the brain think that there is too little steroid hormone circulating in the blood. As a result higher levels of steering hormones are produced, which stimulate testosterone production in the testes.

Clomid not only has fewer side effects than testosterone, but it’s also cheaper. Researchers at Rush University in the US calculated in 2010 that the costs of Clomid treatment are less than a third of treatments using testosterone preparations. [J Sex Med. 2010 Jan; 7(1 Pt 1): 269-76.]

Because they wanted to see for themselves whether Clomid works in men, the Brazilians gave their test subjects a pill containing 25 mg clomiphene citrate every day for 3-6 months. The men’s testosterone levels almost doubled, as you can see below.

One side effect of testosterone therapy that is cause for concern among cardiologists is a worsening in the cholesterol balance, which is associated with an increased risk of cardiovascular problems. In this study there was no sign of this happening. In fact the Clomid actually improved the men’s cholesterol levels a little.

The treatment also reduced the sexual problems that most of the men had. Among the over-seventies however Clomid led to improvements in about half of the subjects, but no change was noticed in the other half.

“Our data showed that a daily dose of 25 mg clomiphene citrate was effective in stimulating endogenous T production in a short follow-up”, the Brazilians conclude. “No serious adverse events were recorded during the study period. This medication should be considered a therapeutic option for patients with symptomatic male testosterone deficiency.”

Newer Post
Short and long-term risks of taking NSAIDs (non-steroidal anti-inflammatories)
Older Post
Is your brain getting enough of this critical nutrient?