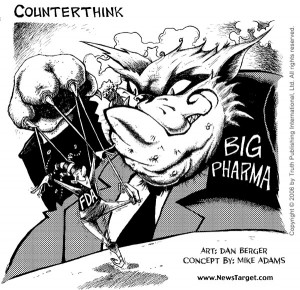 Conventional Medicine Wants FDA to Take Away Most Dietary Supplements

An editorial in the January 25, 2012, issue of the New England Journal of Medicine strongly supports the FDA’s proposed New Dietary Ingredient guidelines that would ban most of the effective nutrients you use today. One inane argument is that since some unscrupulous manufacturers are spiking their products with drugs like Viagra®, then all supplements introduced after year 1994 should be removed from the market until the FDA approves them for safety.

This has nothing to do with how the FDA is proposing to deny Americans access to natural supplements, but it is nonetheless being used as an excuse to give pharmaceutical giants a monopoly over what you are allowed to put into your body.
FDA Inundated with Protests

In response to the New Dietary Ingredient guidelines, the FDA has received more than 146,000 pages of comments that expose the absurdities of what the FDA is proposing.

Pharmaceutical interests desperately want the FDA to put these guidelines into effect so that Americans will be dependent on prescription drugs. The impact on consumers will be higher prices and reduced efficacy, along with the horrific side effects associated with many FDA-approved medications.
We’ve Already Won Some Congressional Support

In addition, Rep. Randy Hultgren (R-IL) recently made a speech titled “Over-regulating Dietary Supplements Endangers Americans’ Jobs and Health” on the floor of the House of Representatives, urging the FDA to go back to the drawing board and ensure that they do not limit Americans’ access to dietary supplements.
Ask Congress to Stop this Insanity

Health freedom groups have devised a unique strategy to save our supplements from central government prohibition.

By accessing our convenient Legislative Action Site, you can ask your senators and representative to make a one-minute floor speech opposing the FDA’s plan to sweep many supplements off the shelf. At the same time, you will be asking your members of Congress to write the FDA about the consumer revolt that is occurring in response to these draconian proposals to take away the most effective dietary supplements on the market today!