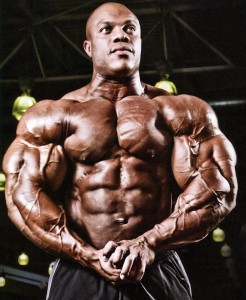 In Part 1 of this article, we went over the 3 primary cardiovascular health risks common to steroid users. As an AAS user, no other aspect of our health should take greater priority. Maintaining proper cholesterol levels/ratios, blood pressure, and hematocrit takes forethought and planning. Chronic, irresponsible steroid use is a reckless practice and when coupled with a genetic predisposition for poor cardiovascular health, the potential for harm increases several fold. Fortunately, there are several alternatives to prescription medications which can be utilized to drastically lesson our degree of risk.

The first course of action when seeking to prioritize cardiovascular health is the initial assessment. We can’t treat the problem(s) if we don’t know what it is, so each health marker should be properly evaluated by a medical professional as a basic starting point. Should any of these health markers be out of range, this step will provide us with the information needed to move forward. Without taking this initial step, we are left without answer or direction and are therefore, unable to proceed in a meaningful fashion.

Blood pressure is the easiest of the 3 to monitor, as accurate readings can be quickly and easily obtained at a physician’s office or at any of the numerous walk-in pharmacies, which supply a self-automated blood pressure machine. The medical community officially defines Stage 1 hypertension as any reading above 140-90. Stage 2 hypertension is defined a reading over 160/90 and is much more serious than Stage 1. Entry into Stage 1 is very common among AAS users and generally speaking, it is not cause for alarm under normal circumstances. However, it should serve as notice to stay vigilant and should the BB’r begin to approach Stage 2, steps should be taken to reduce one’s blood pressure reading.

Some steroids are more likely to increase blood pressure than others, but personal response will play a significant role in determining to what degree each individual is affected. Generally, any increase in blood pressure experienced while on-cycle will rapidly diminish after discontinuation of the offending drug. Mass-building steroids which are characterized by heavy water retention are usually the most likely to cause elevated blood pressure. This includes drugs such as Anadrol, Testosterone (usually at higher dosages), Dianabol, M1T, etc. Should elevated blood pressure become a reality while on-cycle, there are several steps one could take in an attempt to rectify the problem.

The easiest solution to the problem would be to discontinue the offending steroid(s). However, some individuals do not find this to be a suitable solution, nor is it always necessary. In these cases, I encourage the BB’r to explore all his options, which includes being willing to switch out the offending steroid for an alternative steroid that provides almost identical physical effects. Should the available alternative(s) be less troublesome in terms of blood pressure, an exchange may be the best way to go. Sometimes just a lowering of the dose will be sufficient to elicit positive alterations in BP. Another possible contributing factor with aromatizable steroids is estrogen. Excess estrogen levels can lead to elevated blood pressure through increased water retention, making estrogen management an integral part of the overall picture. Any prescription AI will get the job done, such as Letrozole, Anastrozole, Aromasin, or Formestane. I recommend Aromasin in all cases, for reasons we will discuss later.

When it comes to improving blood pressure, supplementation is a no-brainer. Several OTC products have been shown in multiple human clinical trials to be effective in the treatment high blood pressure. A few of the more common ones include Hawthorne berry, Garlic, Aspirin, and CoQ10. Along with these compound’s beneficial effects on BP, they also provide additional health benefits and unlike many prescription drugs, they are free of any serious negative side effects when used responsibly. When properly implemented into a BBr’s program, these supplements have the ability to substantially reduce blood pressure.

Typically, sodium intake isn’t an area which needs to be monitored in individuals with normal or slightly above average BP, but for those who already suffer from more serious hypertension, excess sodium intake can exacerbate the situation. While the recommended allowance for sodium is a modest 2,400 mg per day, most BB’rs will need a slightly higher daily intake, due to sodium loss incurred during training. Regular cardiovascular exercise (which all BB’rs should be doing, including in the off-season), even when performed at a frequency of 3 times per week and 20 minutes per session, is enough to reap many of the health benefits offered by this type of exercise, including a reduction in blood pressure. Lastly, all stimulant based supplements should be avoided when experiencing hypertension, as many of these products will temporarily increase blood pressure during use.

We will now address the issue of cholesterol. Unlike blood pressure, assessing cholesterol levels always requires blood work, so seeing a physician is a necessity. When it comes to cholesterol and AAS users, oral AAS use is the single biggest risk factor, as oral AAS have the potential to dramatically lower good cholesterol (HDL), while elevating bad cholesterol (LDL) simultaneously. While these values will eventually return to normal upon discontinuation of the oral AAS, in some cases it can take months for them to normalize without supplemental assistance. Since frequency of use will significantly determine oral AAS’s potential for harm, let us look at few different situations involving oral AAS use.

For BB’rs who only occasionally use oral AAS and do not display any pre-existing conditions relevant to cholesterol levels, there is generally no need for concern. These BB’rs can safely use oral AAS without worry. On the flip side, BB’rs who chronically use oral without any cholesterol support stand a much greater chance of experiencing long-term cardiovascular damage. This can cause long-term health problems, consequently leading to pre-mature heart attack and stroke. For those currently afflicted by severely damaged cholesterol levels, the elimination of all oral AAS is the 1st step in taking corrective action. For BB’rs with only minor cholesterol impairment, discontinuance of oral AAS is generally not necessary, although the utilization of cholesterol support supplements is strongly advised. Smart BB’rs will utilize cholesterol support right from the start, which will enable the BB’r to engage in moderate oral AAS use in a safe and responsible fashion.

There is a multitude of effective supplements on the market today which are helpful for restoring/maintaining cholesterol levels, many of which have supporting research to confirm their effectiveness. Best results will be obtained when using a combination of products, rather than just a single one. Fish/krill oil, instant release niacin, plant sterols, red wine extract, and CoQ10 (also useful for blood pressure) are some of the most well known and effective supplements available. Keep in mind that when attempting to correct poor cholesterol levels through supplementation, it can take months to see optimal results. When it comes to cholesterol, a pro-active stance is vastly superior to corrective action. Healthy cholesterol levels are much easier to maintain than they are to fix once they have been damaged. For this reason, several of these supplements should remain a permanent fixture in an AAS user’s nutrition/supplement program.

Cardiovascular exercise is also helpful in restoring cholesterol values. One need not perform a large amount of cardiovascular activity to receive benefit; just 3-4 sessions per week of 20-30 minutes each is sufficient. Previously, when talking about estrogen and blood pressure, I mentioned Aromasin as being the AI of choice. Aromasin earns this distinction by being the only AI which has not been shown to adversely affect cholesterol in users. In my opinion, this is important enough to warrant using Aromasin as one’s sole AI.

Hematocrit, being the 3rd and final health marker in this article, is rarely given any worthwhile attention among the majority of AAS users. Firstly, like with cholesterol, hematocrit can only be measured through physician approved blood work. In attempting to deal with the issue of elevated hematocrit, we are left with fewer treatment options compared to the number of options available for elevated blood pressure and cholesterol. This simplifies the treatment process.

One method of preventing hematocrit from becoming higher than it should be is by staying adequately hydrated. Since hematocrit is nothing more than the volume % of red cells in the blood, the more we can increase plasma content relative to RBC’s, the lower our hematocrit level will be. Staying hydrated does not actually change the amount of RBC’s present; it only maintains the proper plasma-RBC ratio. Now, over-hydrating will technically lower hematocrit, but only temporarily, as staying over-hydrated is neither desirable nor realistic. However, I do bring this up to show the importance of staying properly hydrated, as allowing oneself to become dehydrated, especially on regular basis, will have the same effect as if one’s hematocrit has risen.

In terms of AAS, both type & dosage are responsible for the increase in hematocrit a BB’r will experience. Certain AAS are also more prone to elevating RBC’s than others. Anadrol and EQ would be two examples of steroids which are well known to cause substantial elevations in RBC’s. In the event that hematocrit rises too high, either a lowering of the dose or cessation of the offending steroid(s) should be contemplated.

Another option for lowering hematocrit would be eating grapefruit…yes, grapefruit. Grapefruit contains large amounts of a compound called naringin, which is largely absent in other citrus fruits. Recent research has concluded that consuming the amount of naringin found in just ½ to 1 grapefruit per day is able to significantly lower hematocrit without any known negative health effects (note: naringin can interfere with the effects of other medications, so make sure that you are not currently taking any prescription medication which may be adversely affected by naringin, prior to its inclusion in your program). Research has also shown that naringin will only reduce hematocrit when it has risen outside the normal range. Naringin has no effect on normal hematocrit levels and amazingly, it will even increase hematocrit levels when they are deficient. Therefore, grapefruit’s/naringin’s effect on hematocrit is determined by the body’s need, with it acting more as a stabilizer/balancer of hematocrit levels.

In this article, I covered some of the non-prescription methods of maintaining/improving cardiovascular health, in terms of blood pressure, cholesterol, and hematocrit, but there are times when prescription/medical intervention is necessary. None of the information presented in this article should be misconstrued as medical advice, nor is it meant to replace the advice of a physician.