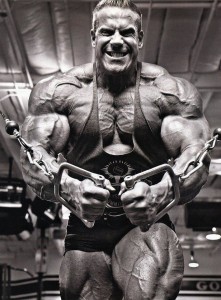 Let’s face it; today’s professional BB’rs are light years ahead of the typical steroid user when it comes to physique development. For most aspiring BB’rs, their efforts in the gym are more likely to be rewarded with a level of musculature on par with a local BB’ing competitor or the neighborhood gym rat, than the physiques which grace the Mr. Olympia stage. This contrast in development is often so wide that many are left asking the question…”What’s the secret?” From their perspective, because they struggled to build even a moderate amount of muscle size, they cannot begin to fathom how anyone could build such an extreme amount of muscle mass without using either a death-defying amount of drugs…and/or some drug combination privy only to the pros.

The promise of the existence of a missing link between themselves and the physiques they idolize keeps the fire burning by providing a “hope” that they too can one day attain a similar level of development. If they could only find out the drug “secrets” of the pros, they would surely earn their pro cards as well, right? Wrong.

The only secret is that there are no secrets. All the same knowledge utilized by professional BB’rs to forge their physiques into the show-stopping specimens we see in the magazines is available to all of us. There are no designer drugs responsible for catapulting the pros into the upper echelon of the sport, nor are there any secret drug combinations known only by a chosen few. Even more revealing is that there are no specific dosing guidelines which must be followed in order to build a pro-worthy physique. Of course, high-dose use has certainly taken up residence in the pro ranks, but what is considered “high-dose” for one person can be interpreted to mean something completely different by another. Just as opinions on this subject differ, there is also significant variance regarding the dosing amounts among professional BB’rs. Frequently, the uneducated individual will automatically assume that the larger BB’r must be using larger doses of drugs in comparison to his smaller peers, but this is not necessarily the case. Often, the size of the BB’r is not an accurate indicator of total drug intake.

For example, one pro BB’r in particular, who weighs about 190 lbs in contest shape, routinely administers over 3 grams of AAS per week, while another pro BB’r who carries significantly more lean muscle mass (over 70 pounds more) only uses about 2 grams per week. As a 2nd example, one very popular pro BB’r has been known to use massive doses of steroids, as well as large doses of GH, insulin, and other BB’ing drugs. Taking 500 mg of Anadrol per day, on top of 5+ grams of injectables weekly, is commonplace in this BBr’s drug regimen. In contrast, another pro, who carries roughly the same amount of lean mass, uses no insulin, a moderate amount of GH, and about 2-3 grams of AAS per week.

The point here is that drug intake can vary considerably. While I have found that most pro BB’rs tend to stay within a certain dosing “range”, there are those who take much less than one might think…and there are those who take much more than one might think. Several other factors, aside from total drug intake, play a significant role in determining the ultimate size potential of a BB’r, such as genetics, nutrition, and training. Today, more than ever, the importance of the training component has been vastly undermined by a certain segment of the drug culture, which basically claims that attaining pro-level size has little to do with nutrition & training, and is almost completely attributable to one’s drug intake. Of course, this is miles from the truth, as nutrition is the catalyst which allows BB’ing drugs to capitalize on their muscle-building properties. If nutritional intake is inadequate, growth either slows or stops altogether. One cannot emphasize enough how important nutrition is for the steroid user wishing to build his physique to its greatest potential.

Aside from the direct influence that nutrition has on a steroid’s ability to build muscle, many BB’rs have been led to believe that they must use a particular combination of drugs or certain drugs in specific quantities, if they ever want to turn pro. For example, it has often been claimed that all professional BB’rs use between 15-20 IU of GH on a daily basis and that a BB’r couldn’t possibly turn pro without it. Both of these statements are untrue and there are numerous examples confirming each. In reality, only a small percentage of pro BB’rs use between 15-20 IU of GH per day, as the cost involved is considerable and quite frankly, most pro BB’rs don’t earn shit. Just meeting the basic needs of the pro BB’r lifestyle can cause a substantial hit to the pocket book, let alone purchasing large amounts of GH on top of it. Needless to say, only the financially well off are able to utilize chemical enhancement to its fullest advantage.

It is also commonly claimed that Insulin is partially responsible for the recent increase in size witnessed among today’s BB’rs. No doubt, insulin (especially when combined with GH) has contributed greatly and in many cases has added a significant amount of bodyweight to an already monstrous physique. However, many wrongly assume that just because Insulin is easy to source that it necessarily means every pro BB’r is using it in massive quantities. This is not so. While insulin use may be widespread, dosages and frequency of use are personalized, with some BB’rs choosing to abstain completely. Readers might be surprised to learn that one popular pro, who recently placed in the Top 10 of this year’s Mr. Olympia contest, has never used insulin in his life.

As mentioned above, genetics will ultimately determine not only the potential for growth, but also the appearance of that’s musculature as it sits on the frame. Many pro BB’rs are exceedingly gifted in terms of shape & structure, allowing their muscles to look even bigger than they really are. With enough hard work, the right diet, and adequate drug use, even a man with average genetics can usually build enough size to stand on the national stage, but what that muscle will look like once he’s built it is purely up to genetics…and this is what separates the pros from the non-pros. In conclusion, the next time someone tells you that all the pros are doing this or that, you can reliably discount such talk as nonsense. Drug use among the pros is as diverse as it is in any other sport, with each individual selecting a PED protocol based on their needs, personal preferences, and willingness to assume risks.

Newer Post
Obesity and lack of sleep boost risk for insulin resistance, metabolic syndrome & diabetes
Older Post
Energy drinks: Are they safe for you and your kids?