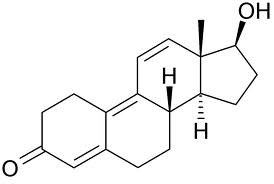 Trenbolone Acetate may be used for cutting, bulking or re-comping. This steroid is very versatile. But out of the three, Trenbolone seems best suited for re-comping. Body re-composition is when you lose body fat and gain muscle mass. It’s not just cutting fat but cutting fat AND adding muscle. If you have been bodybuilding for any period of time you understand how difficult this can be. In fact, re-comping becomes harder and harder the longer you body build. Eventually you hit a wall. This is when we may add Trenbolone to keep gains rolling.

Trenbolone is available in a variety of esters that prolong the release time of this hormone. In 1967 Trenbolone was well studied attached to the long acting undecanoate ester. This ester is similar in action to the French Parabolan brand, also called Hexabolan due to the hexahydrobenzylcarbonate ester. Parabolan was sold for human consumption by Negma Laboratories therefore Trenbolone was a legitimate medicine approved for human use at one time. Trenbolone Acetate was the ester of choice used in the early 1970’s in veterinary medicine. Trenbolone Acetate was marketed at this time in England under the brand name Finajet and as Finaject in France. Trenbolone acetate in the form of Finaplix pellets has been widely used all over the world to add weight and improve feed efficiency in cattle.

Setting up a cycle with Trenbolone depends on many things such as goals, experience level, side effects experienced and threshold for risk. I personally have found that Trenbolone stacked in a specific dose with Testosterone and timed properly can illicit terrific results on a re-comp while minimizing side effects. The following are some sample cycles using Trenbolone Acetate on a re-comp. 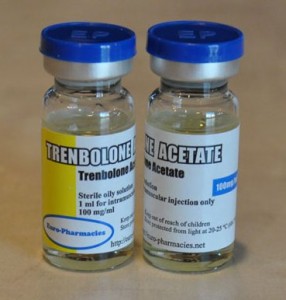 *This cycle is for newer users of Trenbolone Acetate*

Tren Ace (100mg eod) is added at week 9 just about the time gains begin to diminish in a standard cycle. This timing is critical to “push” gains so do not alter the timing. The Tren Ace is ran for a short but effective 5 weeks. This will give a first time user some experience with the compound to assess side effects. Running the Tren the 13th week will keep gains rolling while the Testosterone E or C ester is clearing. Testosterone Propionate may be run throughout as well.

Tren Ace (100mg eod) is added at week 9 just about the time gains begin to diminish in a standard cycle. This timing is critical to “push” gains so do not alter the timing. Notice the Tren and Test Prop extend 2 weeks past the higher dose of Testosterone. This is purposeful to keep gains rolling while the higher dose T Enanthate is clearing. Basically gains should continue through week 14 with this setup.

I would run HCG at least the last 3-4 weeks on cycle and while the meds are clearing. Clomid is a great recovery drug at 50-100mg daily for 4-6 weeks for PCT. Some guys need an AI after the Clomid but only labs can confirm this. If the individual is on hormone replacement therapy that therapy may be resumed immediately post cycle rather than using the above PCT. 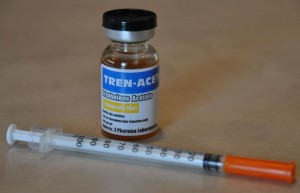 Trenbolone is virilizing in women so extreme caution must be used when administering Trenbolone to females. Virilization in a woman can manifest as clitoral enlargement, increased muscle strength, acne, hirsutism, frontal hair thinning, deepening of the voice, and menstrual disruption. Depending on the female’s threshold for risk, 30mg of Trenbolone Acetate weekly is where I would advise a lady to start. (10mg mon, wed, fri.) More adventuresome females may take 90mg Tren Ace weekly but I would not advise that on a first run. I recommend an insulin syringe to get very accurate dosing and lower the risk of scar tissue. 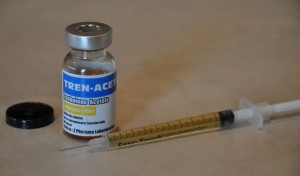 Trenbolone for Androgen Replacement in Males

In January 2011 Trenbolone Enanthate was studied as a possible alternative for Testosterone replacement therapy in the hopes that Trenbolone would not increase prostrate mass or cause adverse hemoglobin elevations and that it would prevent bone and muscle loss. The following is a direct quote from the abstract.

“In summary, low-dose administration of the non-5α-reducible androgen TREN maintains prostate mass and hemoglobin concentrations near the level of shams while producing potent myotrophic actions in skeletal muscle and partial protection against orchiectomy-induced bone loss and visceral fat accumulation. Our findings indicate that TREN has advantages over supraphysiological testosterone and supports the need for future preclinical studies examining the viability of TREN as an option for androgen replacement therapy.” 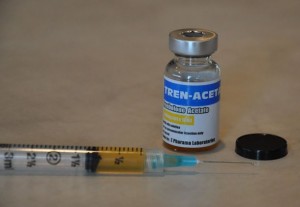 Trenbolone Acetate is a steroid I have had a love hate relationship with. I love Tren’s powerful positive effects but hate the equally powerful side effects. Over the years I have experimented with various methods of using Trenbolone to its full advantage but at the same time minimizing the side effects. The side effects that users report range from increased aggression, insomnia, profuse sweating, “Tren cough” and reduced libido as well as a host of other sides that are common with androgen’s.

Trenbolone is quite powerful especially when used in certain ways. In fact, Trenbolone is 3-5 times more anabolic and androgenic than Testosterone. Trenbolone binds to androgen receptors (ARs) with approximately three times the affinity of testosterone and has been shown to augment skeletal muscle mass and bone growth and reduce adiposity! Tren is one potent weapon in the bodybuilder’s arsenal. Therefore, trying to figure out a way to maximize Trenbolones amazing potential while minimizing its side effects has been a pursuit of mine. Obviously, reducing the dosage is a way to reduce side effects since many times side effects are dose dependent. Some users report that small, every day injections reduce side effects and this can easily be done with an insulin syringe in a lean muscle group. Stacking with complimentary steroids such as Testosterone maximizes Trenbolones potential and also reduces side effects such as loss of libido. I’m convinced there’s almost no other traditional injectable stack that’s as potent and versatile as Testosterone and Trenbolone. It’s a simple stack with enormous potential to harden muscle, promote fat loss and add raw strength. Since Trenbolone is so anabolic it’s a great muscle builder as well. I prefer dosing Testosterone at least two times higher than the Trenbolone dose however when entering a contest prep I prefer the opposite. I recommend either a replacement dose of Testosterone with Tren or no Testosterone at all in the final weeks of prep to illicit a dry shredded look. First time users of Trenbolone may start as low as 200mg Tren weekly to experience its powerful effects. More adventuresome users may double that dosage to 400mg Tren weekly.