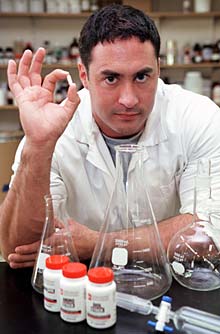 It was the late 90’s and the bodybuilding industry had not witnessed any significant supplement breakthroughs since the arrival of creatine in 1993. The market was ripe for someone to come along and rock the ship, as bodybuilders everywhere were clamoring for a new category of supplementation that promised to deliver more than a placebo effect or indigestion. A walk into any GNC of the day was met by aisle upon aisle of weight gainers loaded with sugar, mostly low quality protein powders, and various vitamins & minerals marketed as some exotic super muscle-builder.

Fortunately, a man by the name of Patrick Arnold had not only enough balls, but enough insight and knowledge to push forward into the first “grey area” of supplementation, which would become and remain a dominant force in the bodybuilding marketplace until this very day. Welcome to the Prohormone/Designer steroid industry.

A lot has changed since Pat Arnold brought the first prohormones to market, as we have seen the industry go from selling only marginally effective prohormones to full-blown methylated steroids rivaling and in some cases surpassing the potency of prescription steroids. During this time we have also seen many of our most effective ‘over the counter’ (OTC) products become scheduled as controlled substances by the federal government. Despite this governmental pressure, it has no stopped the supplement industry from continuing to bridge the gap between illegal anabolic steroids and legal designer steroid alternatives.

In recent years the question has been asked as to how our current OTC designers stack up against prescription/blackmarket anabolics. This is a good question and one which bears answering, as we have frequently encountered well meaning, but misguided individuals who provide inaccurate information on this subject. Even today it is not uncommon to read comments similar to the following: “Why buy OTC stuff when you can buy real gear instead” and “Designer steroids are more toxic and less effective than real steroids”. Fortunately, there is more than enough reliable information out there, both scientific and real-world based, that can answer this question.

Before we can go any farther, I need to clear up a long-standing myth which is still held by some in the bodybuilding community and which states that OTC designers are not “real” steroids. Make no mistake about it, designer steroids are 100% real, legitimate anabolic-androgenic steroids (AAS). As far as both medical science and the government are concerned, the only difference between script and OTC steroids is that OTC steroids have not yet been scheduled as controlled substances. You see, of all the steroids sold today, whether they are OTC, black-market, or prescription, almost all of them were first synthesized, researched, and archived in the late 50’s to mid 60’s, but only a very small percentage of them ever became prescription drugs. It was these prescription drugs which became known as “steroids” to those in the bodybuilding community and general public, while the many other steroids which never saw production just faded into the history of medical literature.

Of the many 100’s of steroids which were never produced, it is from them that the supplement industry has selected our current roster of OTC anabolics. At this point you might be asking “How are these supplement companies able to legally manufacture and sell these products, since they are no different than any other CIII steroid?” Remember, it wasn’t until 1990 that steroids were officially declared to be controlled substances and illegal to possess without a prescription, but this only applied to steroids which were either currently prescribed, or had been prescribed in the past. All of the many 100’s of steroids which had avoided prescription status remained as unscheduled drugs, which meant that anyone was free to possess them without breaking the law. Certainly, I am sure that the government never anticipated that 20 years later we would have supplement companies digging up 50 year old steroid literature and producing the steroids contained within it!

From here, let’s move on and begin comparing some of today’s OTC steroids with our traditional AAS. Since it is not practical or legal for a supplement company to market and sell Injectable AAS to consumers, they have been forced to limit their business to the sale of oral AAS. Since almost all effective oral AAS are methylated (both OTC and otherwise) in order to make them orally bio-available, we will only be comparing OTC orals against prescription/black-market oral.

We will be evaluating the following list of OTC oral AAS (and a few which have been previously banned) and comparing them against some of today’s most popular prescription/black-market oral AAS:

The purpose of this comparison is primarily to determine the myotropic ability of these OTC orals in relation to traditional oral AAS. For this reason we will not be exploring the metabolism of these drugs, their toxicity, how they should be administered, etc.

Next we will look at the hypertrophic ability of each drug, per mg. Below I have listed them in descending order of strength, from strongest to weakest.

1.) M1T
2.) Superdrol
3.) Dimethazine
4.) Dianabol
5.) Pheraplex/Anadrol: I was originally planning on placing Pheraplex in the #5 position, but since I know of no one who has used this drug in the 100 mg/day range (with is very common with Anadrol), I had no real-world experiences to reference for comparison. Still, my hypothesis is that Pheraplex would exhibit a greater hypertrophic effect if dosed at equivalent doses of 100 mg/day, although they would likely be very similar to what is experienced with Anadrol.
6.) Epistane
7-10.) In no particular order: The remaining 3 traditional steroids (winstrol, anavar, methyltestosterone, and turinabol) fall into the bottom 3.

Through the evaluation of 1000’s of documented real-world experiences, it is clearly shown that the above ranking system is accurate in its estimation regarding each drug’s myotropic potency per mg. However, we can reference one human study, in which the steroid Dimethazine was compared against Winstrol, Anadrol, and Test propionate.

Please keep in mind that Dimethazine is a very closely related cousin of Superdrol, essentially being nothing more than 2 SD molecules bound together with an azine bond. When Dimethazine is ingested, the azine bond is broken and the 2 SD molecules are released. One of the molecules is released into free circulation as unaltered Superdrol, while the other molecule undergoes some type of enzymatic conversion which is not yet understood. Regardless, the point here is that Dimethazine is the weaker cousin of Superdrol, exhibiting a lesser hypertrophic effect per mg. We can also see this difference in potency alluded to in the anabolic rating chart above, with Superdrol having an anabolic rating of 400 and Dimethazine occupying a spot at 200.

The results of the Dimethazine study confirm that Dimethazine has a more potent myotropic effect, per mg, then Winstrol, Test prop, and even Anadrol, which is widely considered to be one of our most powerful oral AAS. Not only that, but the implications derived from this study allow us to logically deduce how we should rank the rest of the steroids on the list, regarding their myotropic effect per mg. Therefore, with Dimethazine being stronger than even Anadrol, we can automatically place all the other traditional steroids on the list below Dimethazine, Superdrol, and M1T in terms of muscle-building power per mg, as it is well known that drugs such as Anavar, Winstrol, and Methyltestosterone are nowhere near as potent as Anadrol.

Now that we have a frame of reference regarding potency per mg, we can move onto what really matters, which is how these steroids stack up against each other in terms of muscle-building potency per “effective dose”. It is a steroid’s effective dose which determines how much muscle it can potentially build in comparison to another steroid. It doesn’t matter how strong a steroid is per mg if it is so toxic that we can only use it in mcg quantities. There are plenty of steroids out there which demonstrate an anabolic capacity, per mg, which is many times greater than any other steroid ever produced by either a pharmaceutical or supplement company. But… but many of them are so toxic that they cannot be administered in dosages anywhere close to those used with the steroids listed above. We see this occurrence with a steroid like Cheque drops. It is exceedingly potent, yet every bit as toxic, which effectively prevents the drug from being dosed high enough to build any meaningful degree of muscle mass. This is why a drug’s “effective dose” is so vital in determining its true muscle-building potential in the real-world.

The doses listed above reflect the average dosing range for each AAS, although some individuals will choose to venture outside of these guidelines. In attempting to decide how these drugs rank according to effective dose, anecdotal evidence is crucial in making such a determination. There is not a steroid in existence which has not relied on user experience in order verify potency. With this said, M1T, which enjoyed huge OTC success for a few years in the mid 2000’s, has thus far proven to be the most powerful mass-gaining oral AAS ever produced. Just 30 mg per day of M1T will kick your ass in the gains department (most likely in the side effects department too). Gains of 20+ lbs in 3 weeks were “normal”…making it easily the #1 mass-builder of all-time.

SD ranks 2nd behind M1T, yet each drug affects the user’s appearance so differently from the other, that any comparison between the two is difficult. SD has now been around since 2005 and has sold 10,000’s of bottles from various manufacturers. Users may gain more overall body weight with either Anadrol or SD, but the gains with Anadrol are generally very wet and fleeting, while SD elicits gains which are dry and solid, leading to significantly greater gains retention post-use. This is indicative of a higher percentage of lean mass gained per pound of body weight.

Dimethazine is fairly close to SD in potency and generates nearly identical physical effects. It has been scientifically proven, as stated above, to surpass Anadrol, Test prop, and Winstrol in muscle-building power. At this point, OTC designers have claimed the top 3 spots on the “Most potent oral steroids currently in production” list. You will not find any other steroids currently sold on the black-market or through prescription, which can build more muscle per effective dose (Note: Both M1T & Pheraplex are now banned and can be found through some under ground lab (UGL) distributers).

I am going to cease with the in depth comparisons, as I believe I have adequately made my point, but if I would have continued, it would’ve been revealed that Pheraplex is similar to Dianabol in potency… that Epistane gives results very similar to Anavar (yet builds more muscle per mg)… that Halo Extreme gives nearly identical effects to Turinabol on a mg to mg basis…etc. So, the next time you read on the forums that OTC designers aren’t “real” steroids…or that ”real AAS work better”, you will have enough information in order to dissect and destroy such ignorant arguments.

Note: Some very potent OTC designers, such as Methylstenbolone and Boladrol, were intentionally left out of this article for the sake of time. Additionally, these drugs have much less real-world application at optimal dosages compared to the other drugs on the list. Therefore, I did not feel comfortable assigning them any definitive ranking in relation to the previously mentioned steroids in this article.