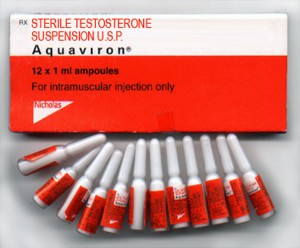 Testosterone is the undisputed king of steroids mainly because it is safe, elicits rapid mass and strength gains while maintaining libido, a sense of well being and energy. It’s not uncommon for a first time user to gain 15-20lbs of LBM in a standard Testosterone cycle. Pure Testosterone comes in a water based aqueous form (Suspension) and also in a solvent/oil based form (Test Base).

Suspensions have tiny particles that are visible with the naked eye. If left on the shelf for a few days many times the particles will sink to the bottom leaving the clear solvents and water on the top. Depending on the manufacturer, particle sizes vary meaning some Suspension preparations can clog a 22 gauge needle. Ultra micronized Suspension can pass through a 25 gauge needle making injections more comfortable. Shake the suspension preparation vigorously before injecting.

What is the real half life of Testosterone Suspension?

There is no classic half life of aqueous Testosterone Suspension due to the nature of the various suspension particle sizes and the non existence of an ester. In other words we don’t see the same types of decay rates with blood androgen levels in non esterfied preparations that are seen in esterfied preparations. However in March of 2011 there was a pharmacokinetics study done in horses that reported a median terminal half-life of 39 hours with aqueous Testosterone Suspension.(1) The disposition of testosterone from this formulation was characterized by an initial, rapid absorption phase followed by a much more variable secondary absorption phase. There were at least two plasma testosterone concentration peaks. The first peak is almost immediate and the second peak is a whopping 7 days later on average according to the chart in the full study. The study indicates that the initial peak is from the Testosterone formulation solution and the following peak(s) from the solid material in the suspension. 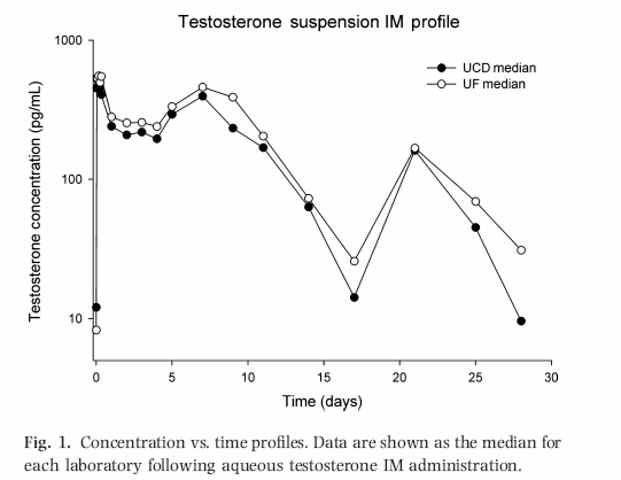 Basically the solution almost immediately hits the blood stream when injected and then a few days later the solid particles are slowly absorbed by the body causing other peaks in testosterone blood androgen levels.

So how often should you administer Suspension?

Based on this science, injecting Suspension every other day or even every three days will maintain high blood androgen levels. The king of steroids has had a time release delay built into it all along and we have the data to prove it. 100mg every other day would be a good starting dose for newer male users. More advanced male users could easily double that dose for very rapid and pronounced LBM gains. Suspension is moderately estrogenic and that effect will be dose dependant. The more you administer the more likely aromatase activity will occur. I would use Nolvadex to lower estrogenic side effects or an aromatase inhibitor.

Nolvadex is used to keep lipids positively influenced for those concerned with cardiovascular health. I have opted for an injection schedule of only three times per week to allow for comfort and because a more frequent schedule is not needed.

This cycle should produce rapid increases in strength and mass. I would use this cycle during a bulking phase. A more adventuresome user could stack a strong oral like Dianabol or Anadrol with the above cycle at 50mg daily producing an amazing and rapid increase in size and strength if nutrition, training and recovery are dialed in.

Reference:
1. An interlaboratory study of the pharmacokinetics of testosterone following intramuscular administration to Thoroughbred horses.