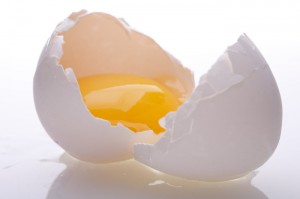 Since prehistoric times, bird eggs have played an important part in the human diet. They are rich in taste, highly nutritious and easy to prepare. The protein found in eggs is more complete than meats and fish. It contains all essential amino acids in ratios that yield a high biological value, needed to maximize muscle growth and fuel an energetic nervous system. Ancient Roman gladiators had to be strong and healthy to survive intense battles – and many early Romans reportedly started meals with a course of eggs. Today, eggs remain a well established dietary addition for strength athletes. It’s not unreasonable to expect a carton of eggs (or six!) in the refrigerators of bodybuilders and powerlifters. As we bask in a society ravaged by health complications and obesity, eggs are receiving a lot of blame for increases in heart disease due to their high cholesterol content. People are led to believe it’s healthier to discard yolks, in favor for whites, or eliminate them from their diet all together. The vilification of eggs continues to pass on like a bad rumor; despite several recent scientific studies demonstrating that healthy adults can safely enjoy eggs everyday, without any negative affects on their health.

What’s in the yolk?

Along with the shells, countless fitness fanatics toss a few egg yolks in the trash while preparing breakfast – but what exactly is ending up as waste? Ironically, most of the nutrition is in this round yellow mass; which makes sense, considering it’s meant to nourish a developing embryo. Like most foods naturally high in cholesterol, egg yolks are full of nutrients. The yolk only makes up about a third of an egg’s liquid weight, yet it provides a little less than half of an egg’s total protein. Egg yolks house all of an egg’s fat, arachidonic acid, omega-3 fatty acids (DHA), carotenoids, zinc, and vitamins A, D, E and K. The yolk also provides most of the calcium, iron, phosphorous, manganese, selenium, thiamin, pantothenic acid, folate, and B vitamins. In fact, the white only contributes significant amounts of magnesium, potassium, sodium and niacin.

So… are eggs bad for healthy, athletic people?

Published in January 2007, a cohort study tracked over 9,500 adults between ages 25 and 74 years old to find an association between egg consumption and risk of cardiovascular diseases and mortality. They found consuming more than six eggs per week (an average of one egg or greater per day) does not increase the risk of coronary artery disease or stroke among healthy adults. A few months later, a study presented at the 2007 Experimental Biology Conference in Washington, D.C., explained that eggs offer an insignificant role in increasing risk of coronary heart disease (CHD), when compared to other CHD risk factors. More important than a three-egg omelet, the biggest threats to heart disease are based on gender, genetics, smoking, high blood cholesterol, high blood pressure, physical inactivity, obesity, diabetes, alcohol and stress. When these other risk factors are considered, scientist suggest eggs contribute a measly 0.6 percent of CHD risk in men; 0.4% for women.

Fact: cholesterol is a critically important molecule, required for normal bodily functions. It helps maintain the integrity of every cell membrane in the human body. Cholesterol is abundant in brain and nervous system tissue. Even though the brain only represents a small portion of a person’s weight (around 2 percent), it contains around 25 percent of a body’s total cholesterol. Myelin, the fatty acid surrounding nerve fibers, is dependent on cholesterol to conduct electrical impulses that control movement, sensation, thinking, learning and memory. Cholesterol has been found to be the most important factor in the formation of synapses, connections between neurons that form the basis of learning and memory. Bile acid, required for the digestion of fats, is synthesized from cholesterol in the liver. Vitamin D, necessary for strong bones and teeth, is also synthesized from cholesterol and abundant in cholesterol-rich foods (cod liver oil, herring, oysters, catfish, sardines, mackerel, salmon, caviar and shrimp). Cholesterol is a precursor to all steroid hormones and is needed to synthesize testosterone, for improved libido, confidence and muscle mass. Eggs are a major source for dietary cholesterol; averaging around 200mg each.

Low-carbohydrate diets are popular with bodybuilders and powerlifters trying to shave off body fat. Even with the avoidance of processed junk food, this dietary structure routinely boosts daily cholesterol consumption due to certain protein-rich food selections. Eggs are prevalent food choices in typical low-carbohydrate diets, while others include: lamb, beef, chicken, organ meats, turkey, pork and fish – all low in carbohydrates but rich in cholesterol. Nonetheless, these diets reportedly produce little – sometimes favorable – effects on plasma cholesterol levels. In August, British researchers showed that consuming two eggs a day does not increase total plasma or low-density lipoprotein (bad) cholesterol when accompanied by moderate weight loss plan. Two eggs deliver an additional 400 milligrams of cholesterol to a person’s diet. Egg-fed and non-egg-fed subjects lost weight with the energy restricted diet, while trimming off nearly the same amount of body fat. At the end of 12 weeks, total plasma cholesterol concentrations fell for both groups. The researchers demonstrated that increasing dietary cholesterol, in combination with a caloric deficit of around 500 to 1000 kilocalories per day, was accompanied by a decrease in LDL cholesterol, similar to that produced by an energy-restricted diet alone.

It seems obvious that obesity presents the greatest risk to cardiovascular health, since it’s tied to most risk factors – such as over consumption of saturated and hydrogenated trans-fatty acids, high glycemic loads from sugary foods, physical inactivity and alcohol binges. In February, research was published in the Journal of Nutrition that found overweight men who eat three eggs per day while on a carbohydrate-restricted diet have a significant increase in high-density lipoproteins (good) compared to men who did not eat eggs. They also concluded that egg consumption during a low-carbohydrate diet helped lower risk factors associated with metabolic syndrome. Despite efforts to remain active and apply dietary techniques for improved body composition, people will always remain at the mercy of inherited family traits. Blood chemistry tests are needed to identify genetic risks for cardiovascular systems.

As ironic as it sounds, science has shown dietary cholesterol from healthy whole food sources has a relatively small effect on total plasma cholesterol. Egg consumption has little relationship to high blood cholesterol or an increased incidence of heart disease in healthy, active adults.