“Eat breakfast like a king, eat lunch like a prince and eat dinner like a pauper.” This maxim can be attributed to nutrition writer Adelle Davis, and since her passing in 1974, the advice to eat less at night to help with fat loss has lived on and continued to circulate in many different incarnations. This includes suggestions such as:”Don’t eat a lot before bedtime”
“Don’t eat midnight snacks”
“Don’t eat anything after 7pm”
“Don’t eat any carbs at night”
“Don’t eat any carbs after 3 pm”
and so on… 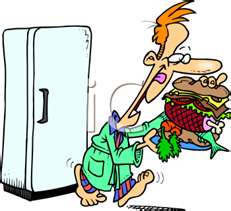 “I want to get cut up for an upcoming contest. Should I eat at night? I heard I shouldn’t eat carbs after six pm.”Duchaine answered:

Me personally? Unless I’m weight training at night, I have always reduced calories and carbs at night when “cutting” for bodybuilding competition. It’s worked so well for me that I devoted a whole section to it in my program, Burn The Fat, Feed The Muscle (BFFM) and I call the techniques “calorie tapering” and “carb tapering.” For more information on how I use these methods to help me reach single digit body fat, you can visit: www.BurnTheFat.com